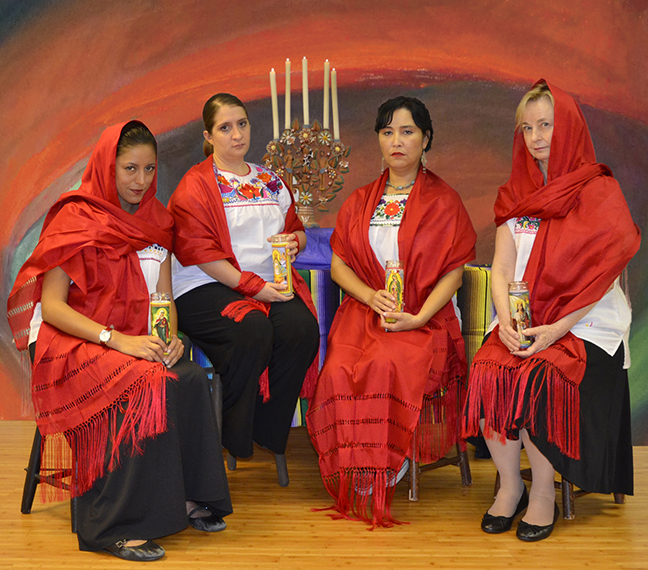 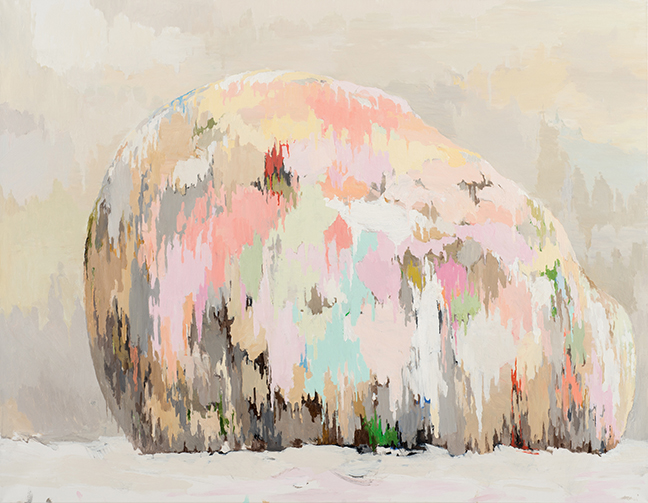 In keeping with Contemporary Art Month’s undercurrent of cross-cultural collaboration, Ruiz Healy Art has partnered with Berlin’s Galerie EIGEN + ART to open a window into the German art scene via “Straight from Berlin,” an exhibition pairing artists Uwe Kowski and Jörg Herold. Though Kowski doesn’t identify as an abstract painter, his works incorporate layers of abstraction embedded with text fragments and suggestions of landscapes. Self-described as a “documentary archaeologist,” Herold captures lost histories and imaginary destinations in projects ranging from collage to performance. His latest series employs photographs washed with stain, watercolors and ink. Unveiled in conjunction with the gallery’s grand opening in its expanded new space, “Straight from Berlin” includes a book signing during Thursday’s opening reception and an artist talk with Kowski on Saturday afternoon. Free, 6-8pm Thursday, noon-1pm Saturday, Ruiz Healy Art, 201 E Olmos, (210) 804-2219, ruizhealyart.com. Through May 3. —BR 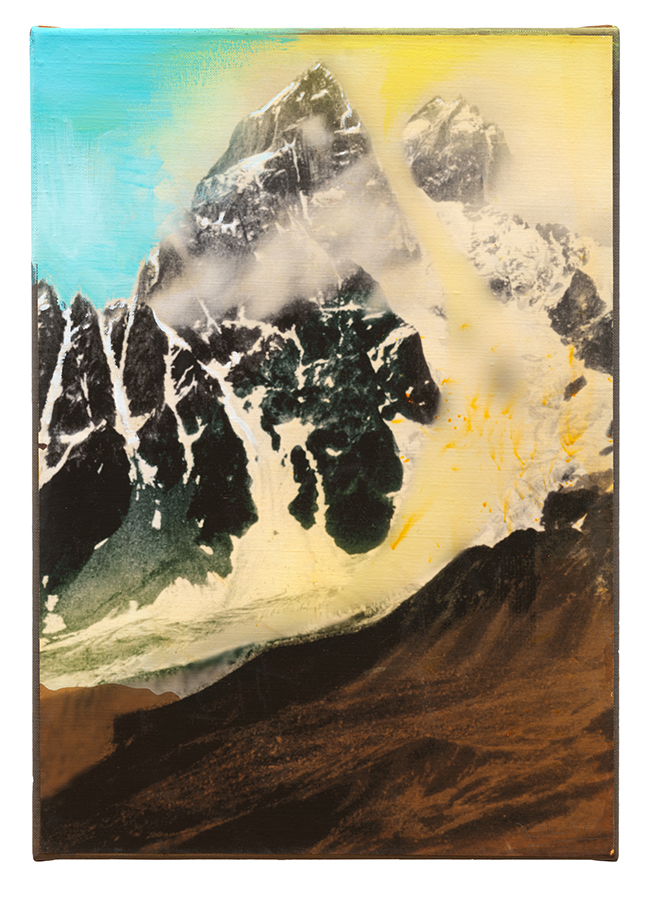 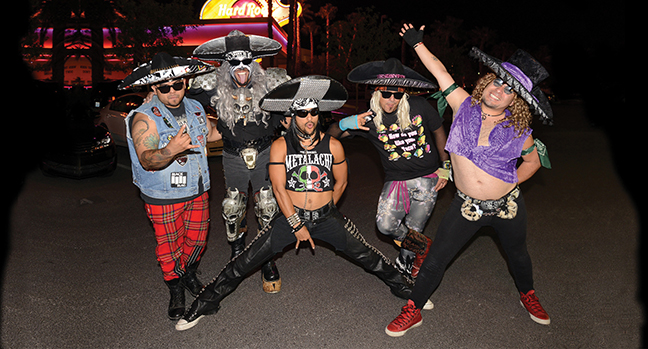 A puro mariachi band at its conception, Metalachi heard Black Sabbath’s “Iron Man,” spanglicized Ozzy’s creation to “Iron Tapatio” and forever changed the face of music. Well, not really. Somewhere between a novelty act and the realest of deals, the quintet lives up to its bastardized name, taking KZEP hits and placing them in mariachi context. Singer Vega de la Rockha remains faithful to the original metal melodies, while the band, comprised of guitarrón, trumpet, violin and guitar, take it full Son style. Expect Metalachi to pull out all the favorite hair metal hits, while diving into heavier material on occasion. Highlights include Slayer’s “Raining Blood,” Twisted Sister’s “We’re Not Gonna Take It” and Iron Maiden’s “Run to the Hills.” With POC and Worst Case Scenario. $15, doors at 7pm Thursday, Backstage Live’s Tequila Rock Bar, 1305 E Houston, 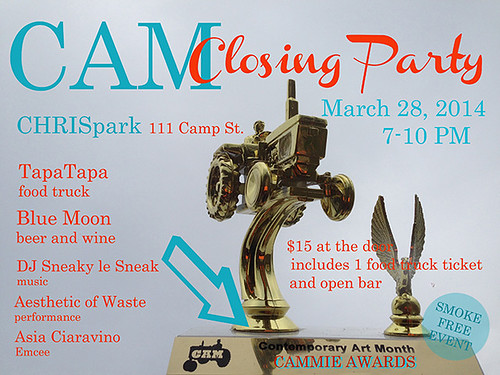 The Linda Pace Foundation’s one-acre CHRISpark is the serene setting for this always-enjoyable event capping off Contemporary Art Month. Functioning as a wrap party for a month packed with exhibitions, performances and happenings, the occasion centers around the announcement of the year’s Cammie Award winners. Determined by online voting, the awards recognize outstanding works in seven niche categories—Alchemic Reactions Award for Collaborating Artists; the R. Mutt Award for Novel Mediums; Art is Life and Life is Art Award: the Unexpected Venue; the Big Boal Award for Participatory Art; the Through the Looking Glass Award for Bending Perceptions; and the I Am Not Spock Award for Doing the Unexpected. The Playhouse’s Asia Ciaravino emcees the celebration, which features music by DJ Sneaky le Sneak, complimentary beer and wine, and concessions available for purchase from Tapa Tapa truck. $15 (includes one food truck ticket), 7-10pm Friday, CHRISpark, 111 Camp, contemporaryartmonth.com. —BR 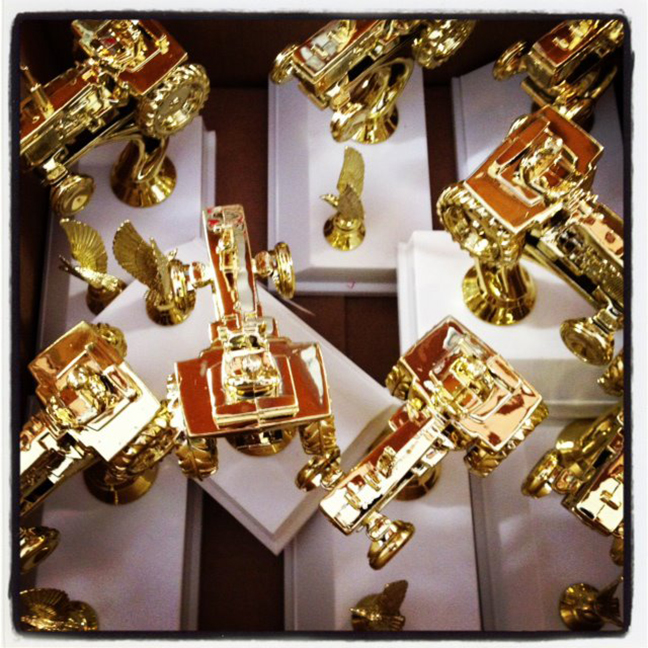 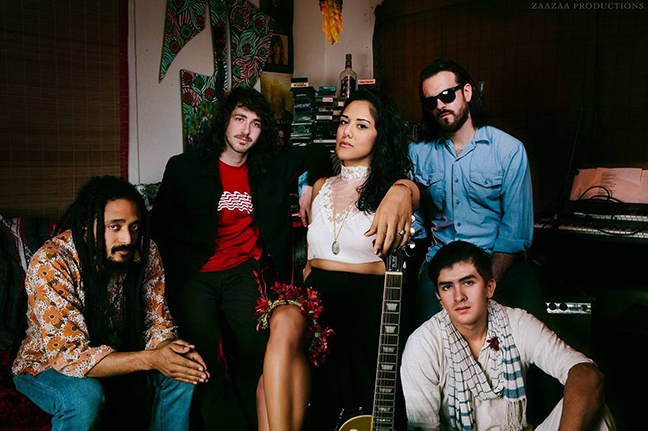 San Antonio’s own Creatura, a power-packing psych-rock quintet led by singer-songwriter and guitarist Divina (aka Emma Felicia), has developed a unique and mesmerizing sound in its short life as a band. Born in June 2013 through the type of serendipity that is almost enough to make a determinist out of me, Creatura has been melting faces and entrancing San Antonio audiences ever since. According to Divina, the band began one June day last year while she was working at Krazy Kat Music. “Jeff [Olivares, bass], Marc [Smith, drums] and Andrew [Salinas, cello] had come in looking for a few things and I asked my boss if I could jam with them,” Divina told the Current over the phone last week. The connection between the three proved so powerful that they agreed to set up a practice soon and Divina, a singer-songwriter with a giant voice who had long yearned for a full band to play with, found what she was looking for. ... Now approaching the first anniversary of that Krazy Kat jam, Divina and company are ready to present their debut EP, Open the Door, at Hi-Tones on Friday. And let me be the first to tell you: This thing is a beast. The six tracks on Open the Door, recorded at Roadhouse Rags in Austin, are expansive, liberating rock songs that haunt the mind with their shrieking peaks, ominous valleys and breathtaking tempo shifts. ... On Friday, a special affair for SA/Austin psych-rock, they’ll perform amid a host of other local, like-minded notables in celebration of the EP release. Austinite lo-fi outfit Low Times and SA’s shapeshifting and heavy Flower Jesus will also be celebrating the release of their new split EP Cosmic American Music. You’ll need to check out the progressive and cinematic sounds of SA’s Crown, the downright freaky and folk-infused experiments of Antique Sunlight (a Flower Jesus offshoot) and the jangly tie-dyed-dream grooves of Austin’s The Wolf as well. Come to think of it—you’ll wanna catch all of these bands. Eat your brownies and get there early. $3-$5, 6:30pm Friday, Hi-Tones, (210) 785-8777, creatura.bandcamp.com. —James Courtney

For the Current’s full story on Creatura, click here. 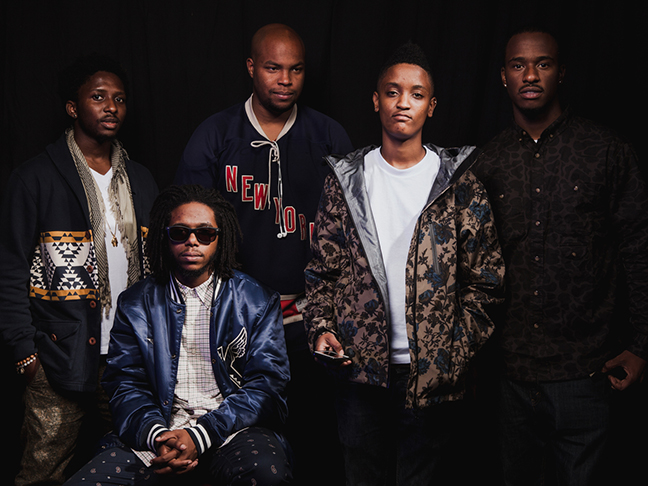 We’ve never used cocaine, mostly because nobody ever offered us any—even when we loudly discuss it with strangers and encourage them to do so (and could you be specific about weight and dollar values? No slang terms, please!) at swanky parties we haven’t been invited to. Still, it occurs to us that the Internet’s “Cocaine” would be the perfect jingle for that white if word-of-mouth on the stuff weren’t so dang effective. “Baby, just ignore the consequence, you look like you could use a little confidence,” coos the siren’s song, but the Internet’s low-key trip-hop is mostly a come-on to chill the hell out. Producer Matt Martians and vocalist Syd’s Odd Future affiliation is more helpful for googling than genre-fying, but Frank Ocean and the Weeknd fans should pack the Rabbit. $15, 9:30pm Friday, The White Rabbit, 2410 N St. Mary’s, (210) 737-2221, scoremoreshows.com. —Jeremy Martin 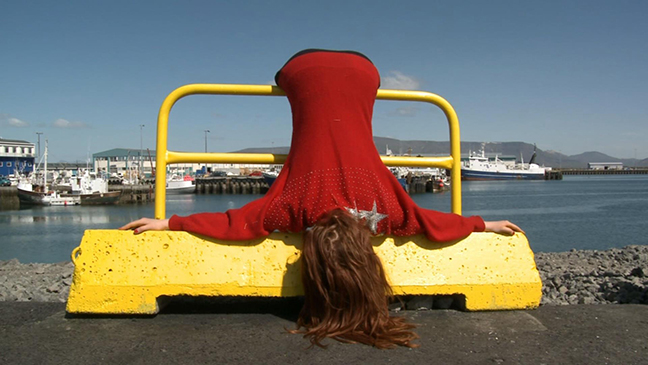 Despite its humble beginnings in a Colorado trailer park, the Sans Souci Festival of Dance Cinema quickly earned the support of the Boulder Museum of Contemporary Art (BMoCA) and the University of Colorado at Boulder, and expanded to offer an internationally touring component that lands in San Antonio thanks to a partnership with AtticRep. In 2013, Sans Souci (French for “without worries”) celebrated a decade of showcasing “highly experimental and interdisciplinary forms” by presenting four distinct programs touching on everything from the prison experience (Amie Dowling and Austin Forbord’s Well Contested Sites) to forest exploration (Antti Ahokoivu’s Peripheral Vision). While the 2014 tour touching down at Blue Star in conjunction with Contemporary Art Month comprises movement-based works from Europe, Australia and the U.S., both nights promise a different selection of shorts. $5, 7pm Friday-Saturday, Blue Star Theatre, 108 Blue Star, atticrep.org. —BR 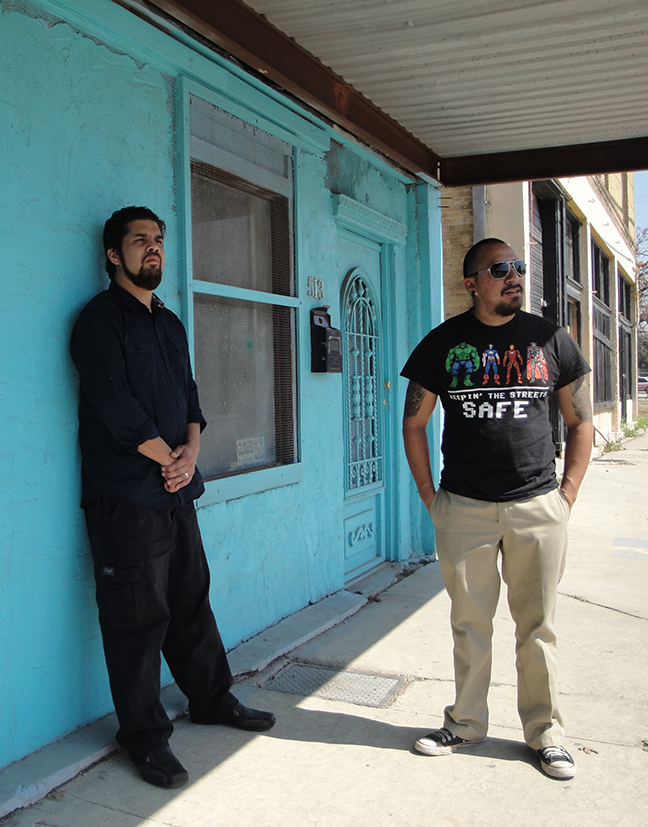 Alvaro “Itzli” Ramirez and Max “Chimalli” Edman are the illest, most real rappers you’ve never heard of. Fortunately, you can amend that fact at Hi-Tones this Saturday when the pair of MCs presents their new collaborative album TXAMX. Itzli y Chimalli, as they are jointly referenced, make bilingual hip-hop music that, amid well-chosen soul and ranchera samples, addresses a variety of important concerns within the hip-hop community and beyond. On the excellent TXAMX, the duo takes on poverty and its far-reaching effects, the lamentable superficiality of message in mainstream rap and the erosion of cultural identity—among other topics. This is hip-hop for the awakened consumer, tired of being told that a person’s worth can be measured in dollars. Apart from the engaging and refreshing subject matter of the songs, local hip-hop fans shouldn’t miss these mad talented rappers with diverse and well-honed delivery styles. $3, 9pm Saturday, Hi-Tones, 621 E Dewey, (210) 573-6220. —JC 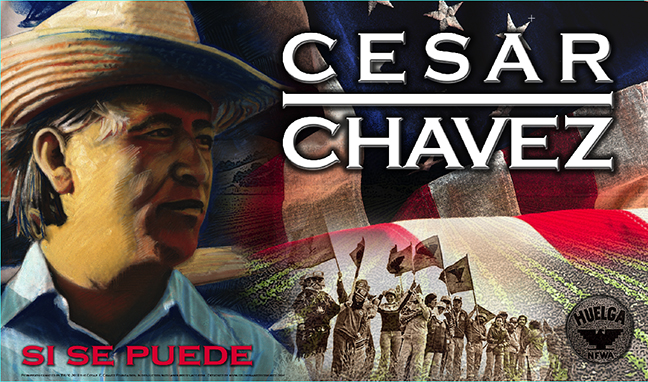 UTSA President Dr. Ricardo Romo serves as Grand Marshal for SA’s 18th Annual César Chávez March for Justice, which kicks off with a morning program (9 a.m.) in the heart of the West Side before setting off for the Alamo. Born in 1927 in Arizona, Chávez grew up in a family of migrant farm workers who eventually settled in the East San Jose, Calif., neighborhood of Sal Si Puedes (translation: leave if you can). Fueled by first-hand knowledge of the hardships farm workers faced, Chávez became a labor organizer in the ’50s and founded the National Farm Workers Association (United Farm Workers since 1972). Employing non-violent methods (fasts, boycotts, strikes and pilgrimages), Chávez led the union for more than three decades, espousing the motto “sí se puede” (it can be done) and ultimately achieving fair wages, medical coverage, pension benefits and humane conditions for hundreds of thousands of farm workers. Free, 10am Saturday, S Brazos at Guadalupe, sanantonio.gov/chavezmarch. —BR 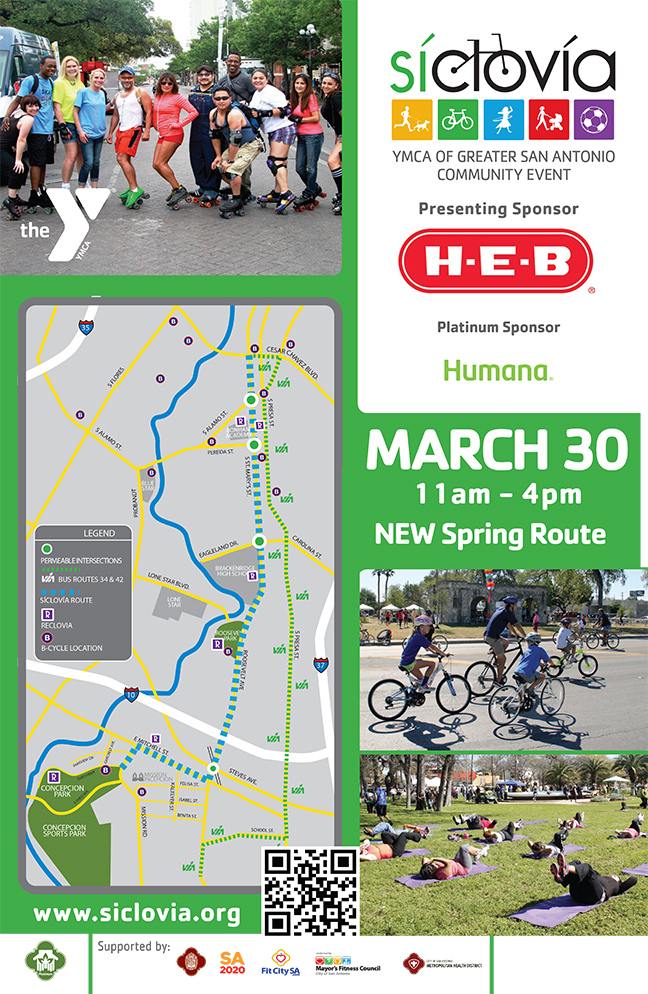 Making recreational use of closed-off city streets since 1976, Colombia’s cycle-centric concept Ciclovía (Spanish for “cycleway”) has inspired adaptations across the globe, with events taking place in Argentina, Australia, Brazil, Belgium, Canada, Ecuador, New Zealand, Mexico, Peru and all over the U.S. Launched in 2011, SA’s fast-growing version Síclovía (a collaboration between the YMCA, the Mayor’s Fitness Council and others) was an instant hit and is now considered the Alamo City’s “largest free health and wellness event.” Expected to draw 65,000 participants, Síclovía’s latest chapter sees the car-free, kid-friendly outing relocating from lower Broadway to a 2.5-mile stretch starting at South St. Mary’s and East César Chávez, continuing downtown to the corner of Roosevelt and Steves and ending at Mission Concepción. Along the route, look for designated Reclovías to relax and refuel. Free, 11am-4pm Sunday, S St. Mary’s at E César Chávez to Mission Concepción (807 Mission), ymcasatx.org/siclovia. —BR 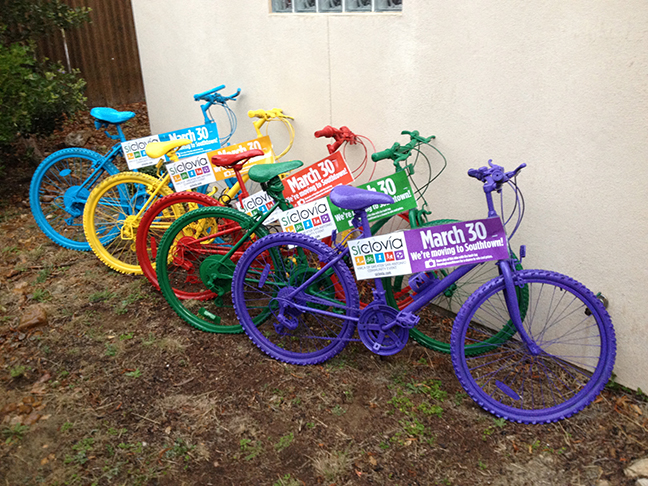