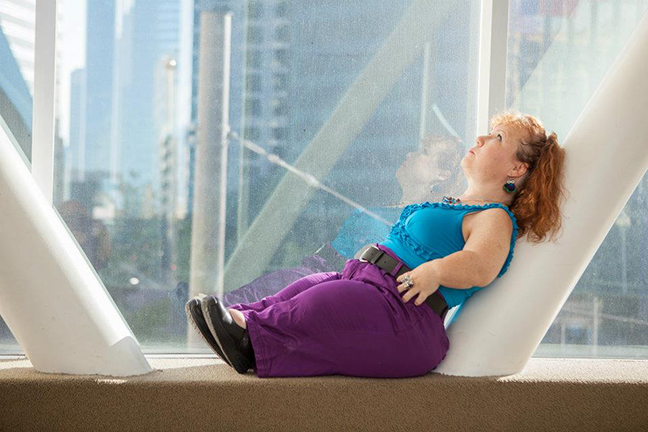 If you grow tired of getting all your chuckles from people who look, think and act just like you and your group of friends, Tanyalee Davis might have the laughs you’re looking for. Standing 3-foot-6, Davis’ perspective is necessarily different from most, but the common threads of human experience and her gifts as a storyteller make her endlessly relatable, and the joy in her enormously confident, sex-positive act is infectious and life-affirming. Promoting empathy through dirty jokes? There oughta be a prize for that. $16, 8:30pm Wednesday-Thursday, 8:30pm & 10:30pm Friday-Saturday, 8:30pm Sunday, Rivercenter Comedy Club, 849 E Commerce, 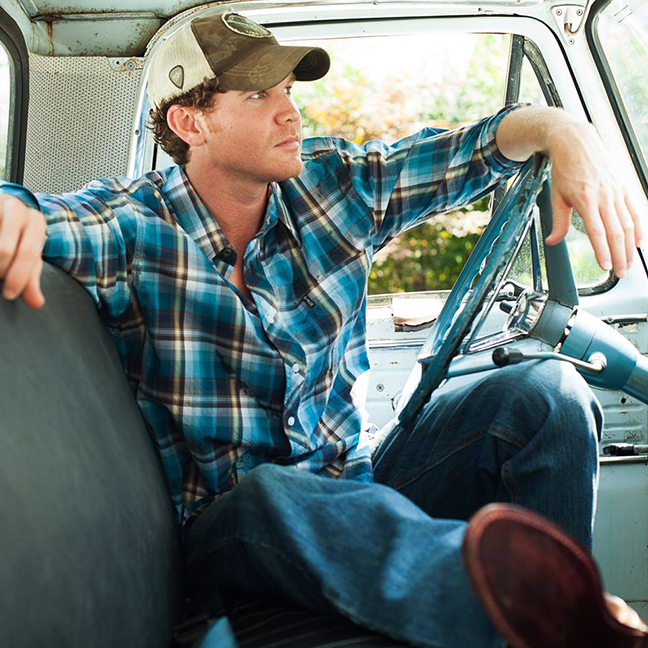 Picture a 10-gallon hat filled with Lone Star beer. Sound good? Sounds like you’re an ideal crowd member for August’s installment of Lone Star Live, switching from the free series’ indie and punk inclinations toward country. On his new release Our Side of the Fence, Curtis Grimes (above) takes the vocal chops he honed on Season 1 of The Voice and puts them to twangy good use. With his band the Swindles, Mitch Webb settles in the cozy middle point between Doug Sahm and Bob Dylan. With the Only Hipsters, Garrett T. Capps plays a violent, fuzzed-out form of blues rock ‘n’ roll. Free, 7-10pm Thursday, Arneson River Theater, 418 Villita, sacurrent.com. –Matt Stieb 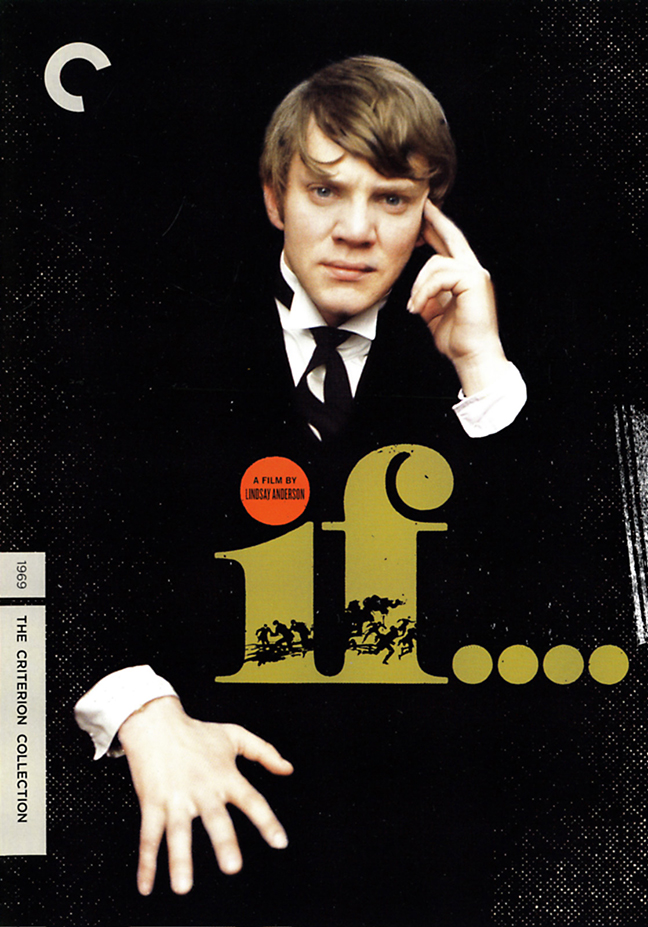 Lindsay Anderson's 1968 classic If.... stars Malcom MacDowell as a radical youth who bristles against the forces of authority in a rigid boarding school. First in a trilogy (followed by O Lucky Man! in 1973 and Britannia Hospital in 1982), the darkly humorous, violent and at times surreal film won the Palme d'Or at the 1969 Cannes Film Festival and has been hailed as “a landmark of British countercultural cinema.” $9.50, 7pm & 10pm Thursday, Alamo Drafthouse Westlakes, 1255 SW Loop 410, (210) 677-8500, drafthouse.com. 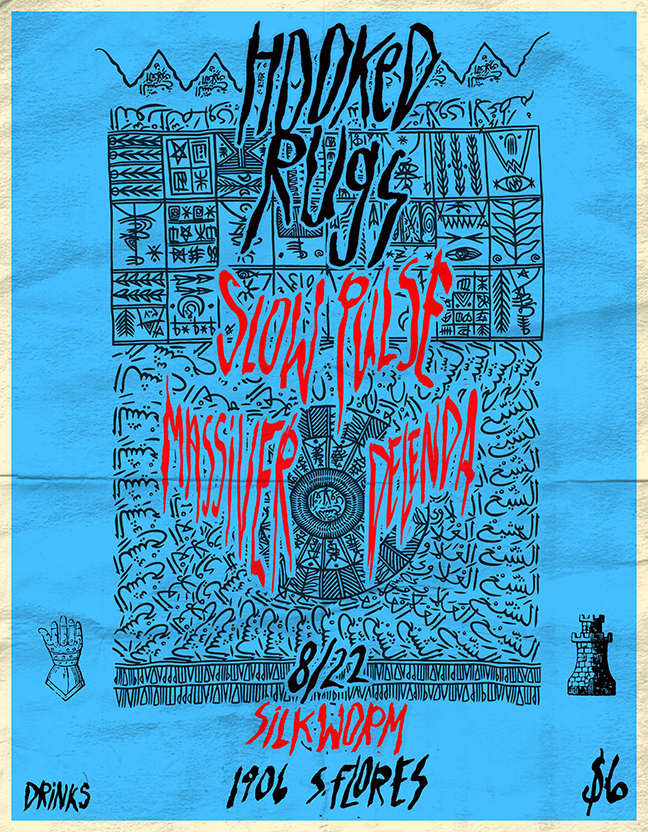 It is challenging, to say the least, to make electronic music with organic sensibilities—with soul. All four bands on this stacked bill, however, manage to pull this off with creative aplomb to spare. At the top of the bill, Houston’s Hooked Rugs crafts delightfully fuzzy synth jams that incorporate industrial sounds and chant-like vocals, creating a mesmerizing and mystical experience. The superb gallery show also features the eclectic yet minimalistic sounds of ATX’s Slow Pulse and SA’s Massiver (pictured) and Delenda, who create, respectively, droning synth miasmas and über-chill new-age ditties. $6, 8pm Friday, Silkwörm Studio and Gallery, 1906 S Flores, (210) 607-1322, facebook.com. –James Courtney 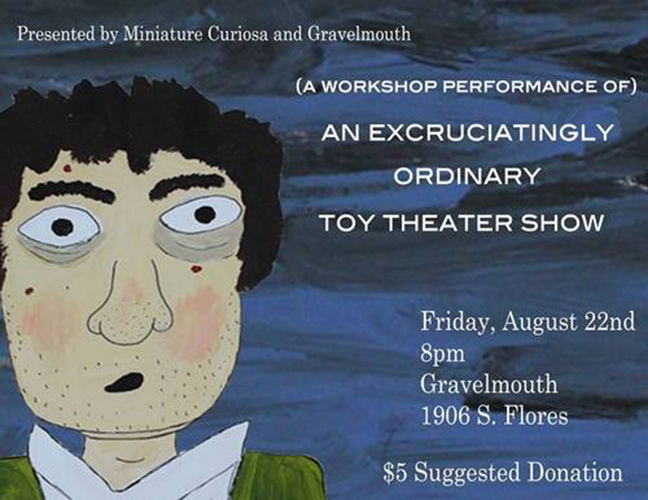 An old man dreams about a missing sweatshirt, a three-foot ghost plagues an eight-year-old boy’s fragile psyche and an opera-singing landlord refuses to return a security deposit. These stories and more will explode onto the stage through miniature dioramas, digital cameras and paper puppets courtesy of Miniature Curiosa and Gravelmouth. $5 donation, 8pm Friday, Gravelmouth Artist Space, 1906 S Flores, (210) 367-2528, gravelmouthgallery.com. 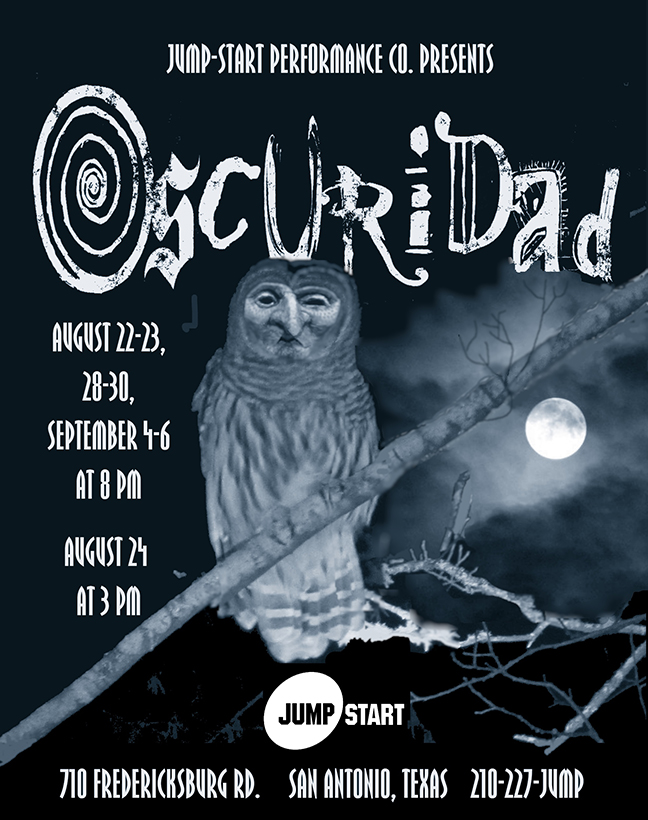 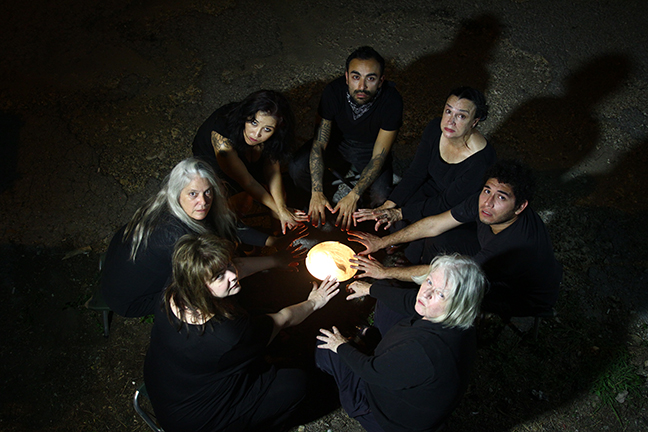 Arms and the Man 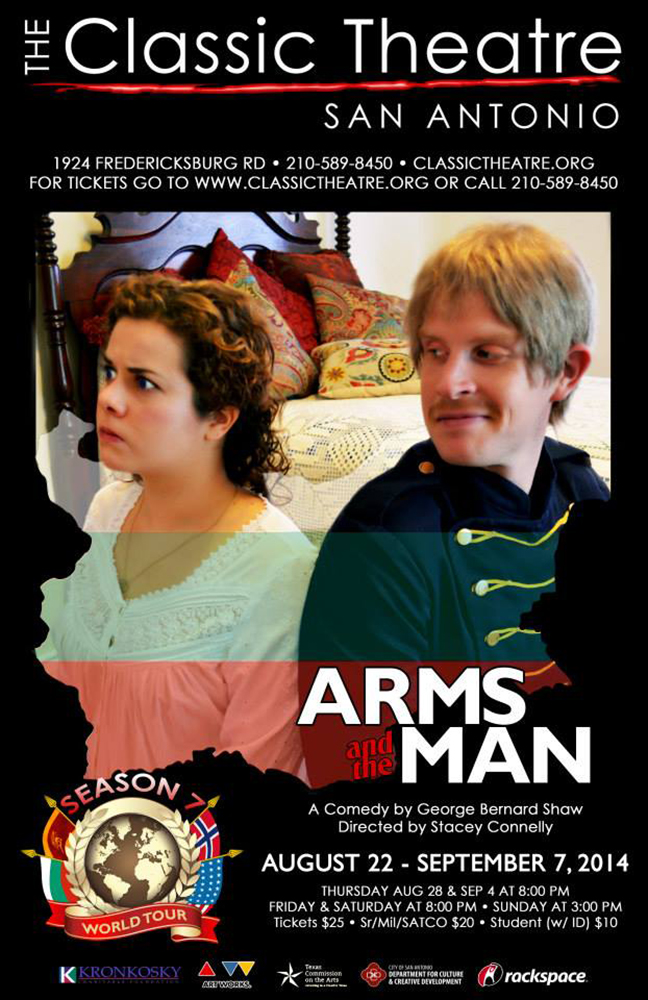 George Bernard Shaw stuffs the starry-eyed ideals of war and human nature inside a box of chocolate creams in his comedy Arms and the Man. Following a young woman who swoons over romance and the two opposing soldiers that woo her, Shaw originally wrote the play for his own mistress Florence Farr. Upon Farr’s performance, she determined that the poetical nature of W.B. Yeats was more to her liking and never collaborated with Shaw again. Regardless, the revered comedy, first produced in 1894, has aged well over the years, with George Orwell calling it “the wittiest play [Shaw] ever wrote.” Stacy Jones Connelly directs The Classic Theatre’s production. $10-$25, 8pm Friday-Saturday, 3pm Sunday, Classic Theatre of San Antonio, 1924 Fredericksburg, (210) 589-8450, classictheatre.org. –Murphi Cook

“The Deconstruction of the Black Woman in Literature, Visual Media and Music” 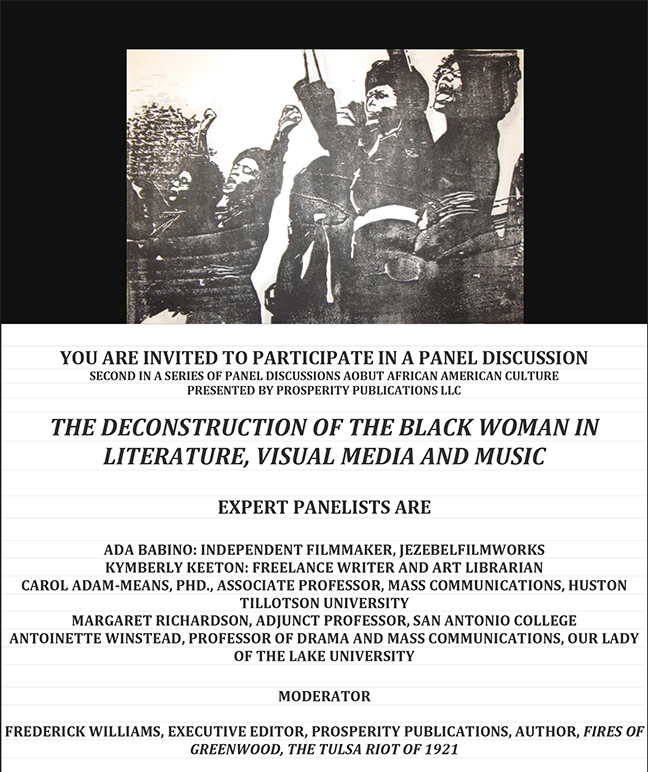 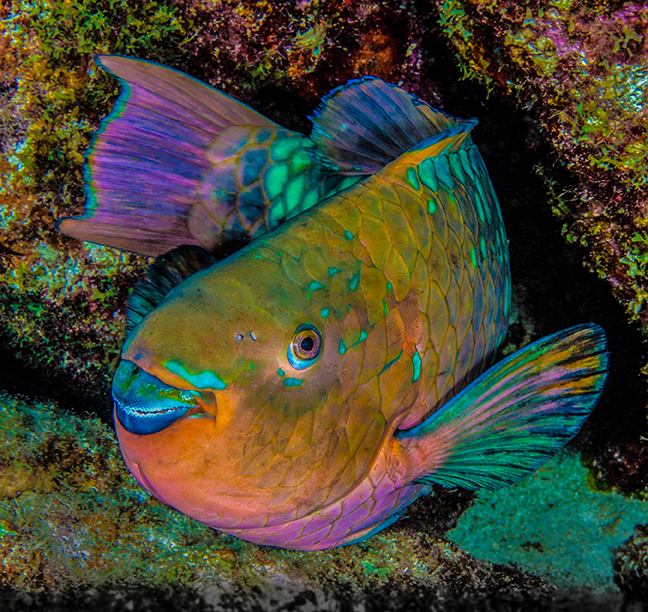 Not unlike Contemporary Art Month in March, Fotoseptiembre often arrives early and stays late. Typically brimming with everything from traditional landscapes and still lifes to elaborately staged scenarios and racy pictorials, the South Texas-based festival of photography opens its 2014 chapter on a colorful yet meditative note by pairing scuba-diving lensmen Robert Michaelson and Jim Sparkman in the duo show “The Silent World.” Promising a visual journey to “the depths of the ocean,” the exhibition gets up close and personal with a number of aquatic beasties including a baby turtle, a “peacock flounder,” an anemone and a sci-fi-worthy marine mollusk called a nudibranch. Free, 5-8pm Saturday, Musical Bridges Art Gallery, 23705 I-10W, Ste 101, (210) 464-1534, musicalbridges.org. Through October 10. –BR 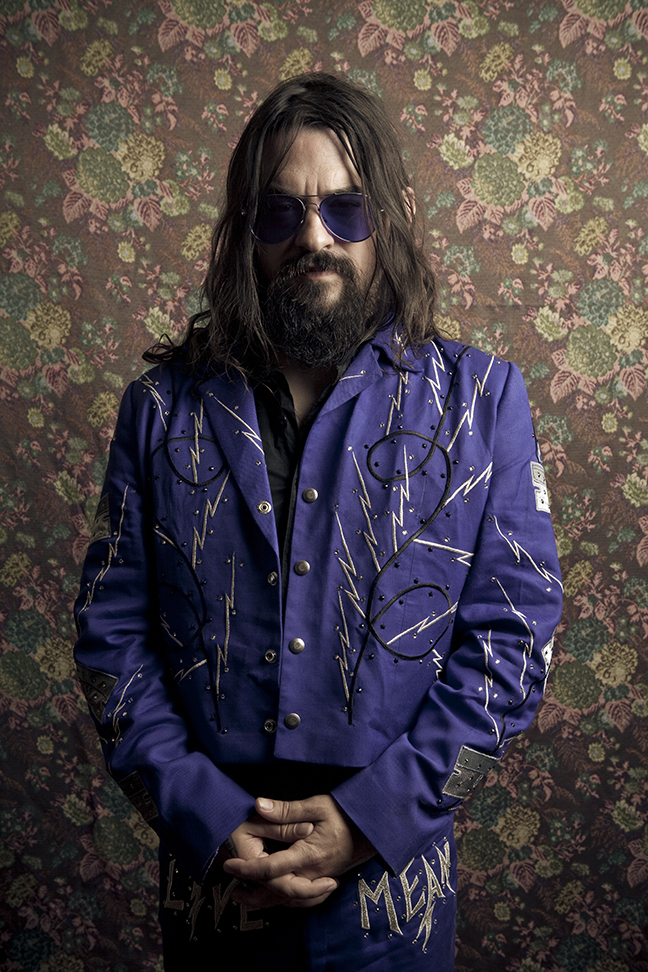 With an outlaw country sound that incorporates elements of Southern rock, blues, psych-rock, and even industrial music, Shooter Jennings, the son of country music legend Waylon Jennings, has showcased his own chops as a songwriter and a musician ever since his 2005 debut with Put the “O” Back in Country. His stop at Sam’s Burger Joint this weekend finds him still supporting the hit-and-miss concept album Heirophant: The Magic and the highly experimental George Jones tribute EP Don’t Wait Up, even as he prepares for the release of his Countach EP, due out later this year.$20-$60, 8:30pm Sunday, Sam’s Burger Joint, 330 E Grayson, (210) 223-2830, samsburgerjoint.com. –JC