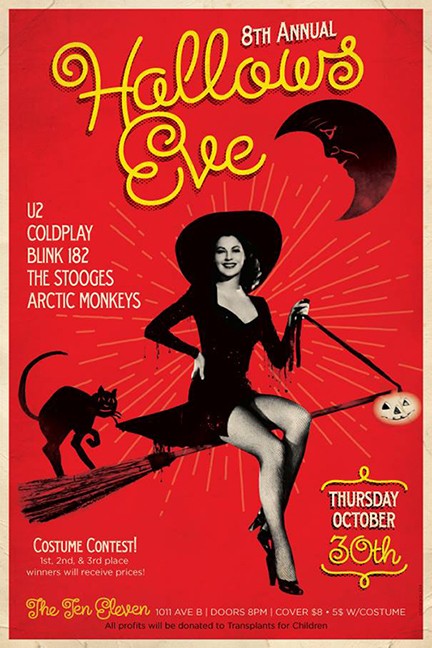 The whole ‘Halloween is a time to be someone else’ notion really takes off in this annual show at The Ten Eleven. Featuring members of all kinds of local acts, the festive event will showcase five tribute bands, taking on the music of Coldplay, The Stooges, Arctic Monkeys, Blink 182 and U2. And if that ridiculously diverse mix of music isn’t enough to bring you out, it is worth noting that all proceeds will be donated to Transplants for Children. So get those costumes ready and let’s hope the Stooges fans don’t get bored during the U2 tribute and start bullying the Coldplay folks. $5-$8, 8pm, The Ten Eleven, 1011 Avenue B, (210) 320-9080, theteneleven.com. —James Courtney
Thu 10/30
Yelawolf

Becoming a successful white rapper in 2014 is not nearly as hard as it was back when Eminem did it, or the Beasties before him, but it still requires a level of skill that is capable of silencing doubters right off the bat. Yelawolf definitely has that kind of skill. After establishing himself, over the course of two dope studio albums and six mixtapes, as a gangsta rapper with an eclectic pop crossover side, Yelawolf has collaborated with artists as diverse as Travis Barker, Raekwon and Ed Sheeran. He hits the Rabbit Thursday reppin’ his forthcoming third studio album Love Story. $20-$75, 8:30pm, The White Rabbit, 2410 N St Mary’s, (210) 737-2221, ticketfly.com. —James Courtney

Hosted by the self-proclaimed “first museum of modern art in Texas,” Have No Fear of Art: Halloween at the McNay is a multifaceted event uniting the unlikely trinity of “goblins, ghouls and Gauguin.” After viewing one of the current exhibitions (which include “Intimate Impressionism,” “Manet to Gaugin” and “Artists Take the Stage”), guests of all ages can eat, drink and be scary while enjoying trick-or-treating on the grassy grounds, food truck fare and an outdoor screening of 1954’s Creature from the Black Lagoon. Drawing inspiration from Beauty and the Beast, the cult monster classic follows a geology mission into the “upper reaches of the Amazon” to find an amphibious humanoid who’s been peacefully living there since the Paleozoic Era but is still frisky enough to get hot and bothered by foxy technician Kay Lawrence (played by Julia Adams). Attendees 21 and up can stick around for an after party ($15) with a DJ, photo booth, palm reader, costume contest and Halloween-inspired cocktails. Free, 5:30-10pm, McNay Art Museum, 6000 N New Braunfels, (210) 824-5368, mcnayart.org.
—Bryan Rindfuss
Fri 10/31
Matisyahu

Hasidic emcee Matisyahu has spent the last decade enlightening crowds with his brand of reggae-influenced hip-hop. In recent years, the beard has been trimmed and he’s distanced himself from his heritage, but his flow and inspiring lyricism continue to command his live shows. In the mid-aughts, songs like “One Day” and “King Without a Crown” propelled him into popular consciousness and have become concert staples. Fresh off the release of his fifth studio album Akeda, Matisyahu performs at the Tobin with support from SoCal reggae-rockers Radical Something. $35, 8m, Tobin Center for the Performing Arts, 100 Auditorium Circle, (210), 223-8624, tobincenter.org. —Erik Casarez

With Sweet Peach Collective, you can take a bite of the peach, but it just may bite you back. Amanda Bartlett and her crew return with an evening of glitter-bombed ghouls and spine-tingling art that blurs “the lines drawn for gender.” Attendees are encouraged to get spooky: costumes encouraged, Día de los Muertos altar provided. And bring your wallet because the 24-artist show features a bevy of offerings, including sugar sweet jewelry, knit delights and ethereal pops from another realm. Pink Leche and Los Sheilaquiles pack the tunes for the collective’s last show of the year. Free, 6pm, High Wire Arts, 326 W Josephine, facebook.com/sweetpeachcollective. —Murphi Cook

Kick off Fashion Week with your cocktail threads and sugar skull heads at the Día de Los Muertos-themed masquerade ball. “We want to encourage people to go all out with their regalia,” local fashion producer Tony Harris says. “That’s an effort and a talent in itself.” And he means it; the event promises prizes valued at more than $5,000 for the top three best-dressed attendees. The evening includes the reading of Fashion Week’s official proclamation by Mayor Ivy Taylor, tunes by DJ Jarvis, and complimentary cocktails from Herradura Tequila. $20-$25, 8pm Sat, Nov 1, River Walk Plaza, Tobin Center for the Performing Arts, 100 Auditorium Circle,(210), 223-8624, tobincenter.org. — Murphi Cook

A one-night festival that celebrates local music, Monkey Fest 2014 will go down Saturday at the White Rabbit (2410 N St. Mary’s), Hi-Tones (621 E Dewey), The Mix (2423 N St. Mary’s) and Faust (517 E Woodlawn). This year’s lineup boasts a whopping 21 local acts, but we are particularly excited to catch sonic experimentalists Micro Missile Attack at Faust, indie orchestra Deer Vibes (pictured) at White Rabbit, ATX space-surfers The Baffles at the Mix and garage-psych rockers The Oblios at Hi-Tones. Whichever venue(s) you decide to hit up—Faust and The Mix are free by the way—you’ll be treated to some of the best music the Alamo City has to offer. $5, 8pm-2am, St. Mary’s Strip. — James Courtney

An early critique of the ’50s, Little Boxes culture of conformity, Leonard Bernstein’s Trouble in Tahiti (1952) follows the husband and wife pair of baritone businessman Sam and his mezzo-soprano wife Dinah as they navigate a failing marriage. Bernstein’s first and only opera in which he wrote the music and words, Trouble in Tahiti commits to conversational language of the era, even including a Greek chorus of scat-singing jazz musicians. This commitment to the common word makes Tahiti a perfect fit for SA’s Opera Piccolo, dedicated to intimate performances from classic and contemporary canons, sung always in English. $15-$50, 8pm Saturday, 2:30pm Sunday, Empire Theatre, 226 N St. Mary's, (210) 226-5700, majesticempire.com. —Matt Stieb

Until San Bernadino fire officials raised a stink, the “official aroma” at Knotfest—a three-day music fest headlined by Slipknot—was set to be the smell of burning camel dung, brought to you courtesy of countless 55-gallon drums filled to the brim with oil and dromedary dookie. All this despite the fact, as percussionist Shawn “Clown” Crahan told Rolling Stone: “You can’t huff it.” Clearly the perfect soundtrack for being gone off that hump dump is Slipknot’s latest (key lyric: “I know why Judas wept, motherfucker!”), and if it’s possible to mean that as a compliment, we do. $42.50-$62.50, 7pm, AT&T Center, One AT&T Center, (210) 444-5000, ticketmaster.com.
—Jeremy Martin