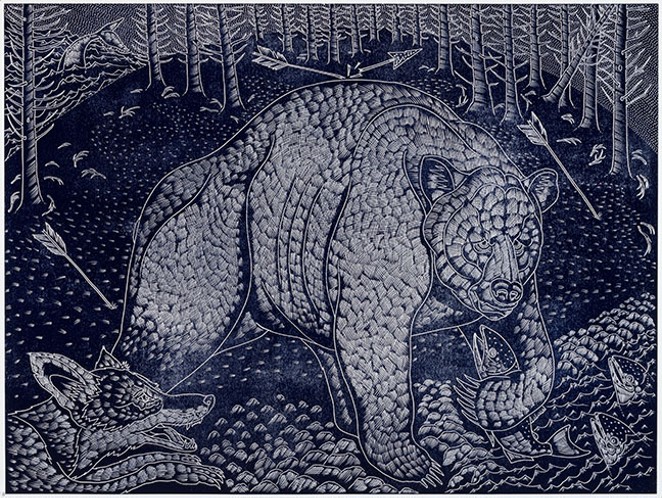 Employing a signature blend of landscape painting, woodcutting, text and Spanish/English code-switching, El Paso native Ricky Armendariz conjures ominous scenes while nodding to everything from Bob Dylan song lyrics and Greek mythology to Native American icons and the U.S./Mexico border. Fittingly, Armendariz likens the intricate cuts he makes in his painted panels to scars and tattoos. Referencing with its title Francisco Goya’s grisly painting Saturn Devouring His Son, Armendariz’s “In the Belly of the Beast” comprises works in his hybrid style as well as a series of wood blockprints. Free, 6-8pm, Ruiz-Healy Art, 201 E Olmos, (210) 804-2219, ruizhealyart.com. —Bryan Rindfuss

Maybe it’s a case of Athazagoraphobia—the fear of being forgotten—but The Memories are putting out records as fast as Burger, Lolipop and their own label Gnar Tapes can press them. Of course, it helps that the Portland quartet’s tunes cruise in the two or three minute range and touch almost exclusively on the topics of boning and getting stoned. On “Dad’s Not Home,” over a lazy Motown chord progression, Rikky Gage gives the OK for afternoon delight: “Dad’s not home/it’s safe to bone.” In this context, 2014’s Touched by an Angel sounds more like a no-fi handjob joke than the CBS religious vehicle. With LA’s Snow Wite, LA’s Period Bomb and SA’s Oblios. $5, 8pm, K23 Gallery, 140 Fredericksburg, (210) 776-5635, facebook.com/K23Gallery  —Matt Stieb

A collection of swell local acts (five to be exact) for the low cover of five bucks is always a good idea. But, the key with this knockout show at the Ten Eleven is that these are new-ish local bands that rock in diverse ways. First of all, Tides. (pictured), recently voted Best New Artist by Current readers, will be spreading its gentle dream-pop joy, which is sure to make you swoon. We’re also excited to catch the twee-leaning alt-indie stylings of Octahedron and the cinematic and psychedelic post-rock sounds of Austin’s Migrant Kids, who seem to (luckily) play here quite often. With Frontage and George Garza Jr. $5, 8pm, The Ten Eleven, 1011 Avenue B, (210) 320-9080, theteneleven.com. —James Courtney
Learn how to get your music heard at ReverbNation.com
Fri 11/7
"Go Spurs Show"
click to enlarge

Hailed as “an artistic tribute and convergence of professional basketball and fine arts,” the team-spirited exhibit “Go Spurs Show” unites more than 20 local artists—Agosto Cuellar, Amada Claire Miller, Ana Fernandez, Vincent Valdez, Ethel Shipton, Jake Zollie Harper and Avi Avalos (AKA Mr. Piñata) among them—in a multimedia celebration of “what it means to be a fan of the San Antonio Spurs.” Curated by Rigoberto Luna, the group show opens with a reception sure to stretch into overtime with “Spurs slam poetry” courtesy of Anthony the Poet and Amanda Flores, plus music by Ghostpizza, Snowbyrd and Executive Realness. Free, 6pm-midnight, Studio One Zero Three, 721 S Presa. —BR 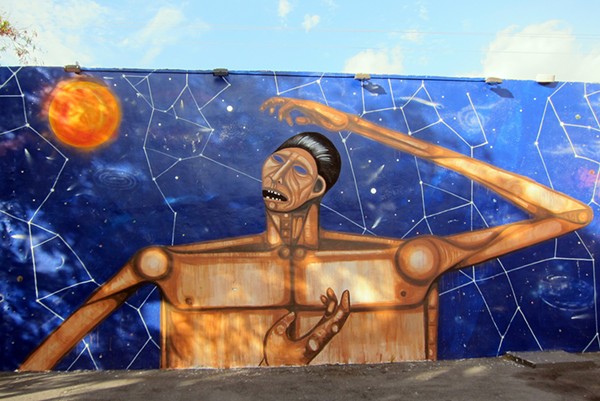 Mural by LA's The Date Farmers
With March, there came rain, but no Luminaria. Months passed, and some gave up hope that the annual festival would return to San Antonio’s cultural landscape. But on November 7 and 8, Luminaria comes back for its seventh year with bold intentions. Historically, Luminaria has been an ever-shifting entity. Mayor Phil Hardberger originated the festival in 2008 as a one-night celebration of work created by San Antonio artists. The event continued to pop up in various locations downtown for three years, before settling into Hemisfair Park from 2011 to 2013. This year, Luminaria returns to the street as artists from all over the world descend upon San Antonio to revel in the city’s position as a cultural crossroads between North and South America. Luminaria 2014 reaches from Central Library and the Southwest School of Art all the way to the new Tobin Center for the Performing Arts and the River North Extension. This expanse of urban landscape becomes a central aspect of the experience. Creative Director Noah Khoshbin believes this year will hearken back to the original spirit of Luminaria because of it. “The synergy on the street is going to be different than past Luminarias,” he explains. “It will be epic in terms of the scale. We’re really working on three levels, which is the river, then we come up to street level and then we come up to work on the facades. It’s a vertical energy.” For a full preview of Luminaria, click here. Free, 6pm-midnight, between The Central Library and the Tobin Center for Performing Arts, luminariasa.org. —Murphi Cook

Henrik Ibsen throws every 19th-century dirty deed on the table in his darkly comic Ghosts, which follows a feisty dame determined to escape the ironclad grasp of her husband. While the Norwegian playwright notoriously hated the English translator’s choice of the title Ghosts, critics were scandalized by the play’s use of venereal disease (“a loathsome sore unbandaged”). Omar Leos directs a flock of familiar faces (including Sam Gilliam, Andrew Thornton, George Burnette and Julya Jara) in the Classic Theatre’s production. $10-$25, 8pm Fri-Sat, 3pm Sun, Classic Theatre of San Antonio, 1924 Fredericksburg, (210) 589-8450, classictheatresanantonio.org. —M.C.

“I made a really good living for a while playing the white guy in black movies,” says Jay Mohr, underselling his career in an old bit. The New Jersey native also has two years on the early ’90s halcyon days of SNL, a douchey role in Jerry Maguire and an enviable library of celeb impersonations. Still, Mohr’s bread and butter is the spoken word, creating and hosting Last Comic Standing in ’03 and currently hosting a talk show on Fox Sports Radio. When he steps to the mic as a comic, Mohr is an enigma, casually slipping through impersonations during his unruly stories. $29.50-$39.50, 7:30pm, Charline McCombs Empire Theatre, 226 N St. Mary’s , (210) 226-3333,
majesticempire.com. —M.S. 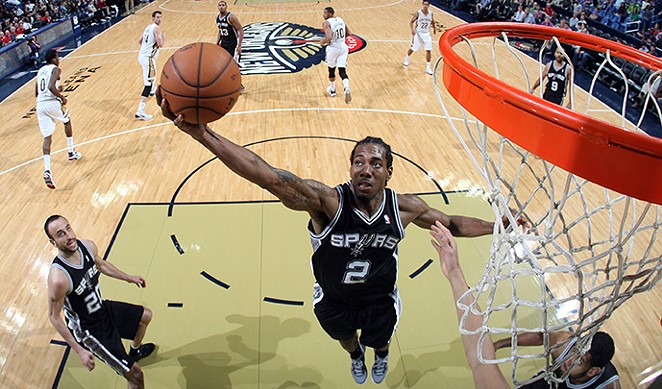 While Tim Duncan added to his jewelry collection on opening night, the Pelicans’ Anthony Davis narrowly missed a triple double in a blowout win. Pre-season, ESPN ranked Davis as the third best player in the league, and we’re already hearing premature MVP whispers from NBA insiders. For Spurs diehards, Davis is a physical reminder of a vintage Timmy who flew down the hardwood, slamming in more than 100 dunks in his fifth and sixth campaigns with the Spurs. By comparison, Duncan dropped 38 dunks last season, but as opponents can attest, an off-the-glass dagger is just as effective. $11-$1,602, 7:30pm, AT&T Center, One AT&T Center, (210) 444-5000, attcenter.com. —M. Solis

The Broadway @ Woodlawn Theatre Celebrity Series with XM Radio personality/host and pianist Seth Rudetsky kicks off with Saturday Night Live alumna Ana Gasteyer, best known for portraying a handful of original SNL characters, including operatic middle-school music teacher Bobbie Moughan-Culp and soft-spoken NPR co-host Margaret Jo McCullen (Schweddy balls, anyone?). On Broadway, Gasteyer has appeared in Wicked and The Threepenny Opera, among other plays. During the Celebrity Series, which will continue in 2015 with two-time Tony winner Christine Ebersole (Grey Gardens) and two-time Emmy winner Megan Mullally (Will and Grace), Rudetsky, a longtime friend of Gasteyer, will interview her about her life and career and accompany her on piano while she performs songs from her Broadway past as well as her debut album, I’m Hip, a compilation of some of her jazz favorites. “It’s going to be a really unusual, intimate and fun night of interviews and songs,” Gasteyer, 47, told the Current during a phone interview a few weeks ago. “It’s like an insider’s peek into the lives we live out here in New York. It’s very weird and unorthodox.” For a full version of our interview, click here. $75-$100, 7:30pm, Woodlawn Theatre, 1920 Fredericksburg, (210) 267-8388, woodlawntheatre.org. —Kiko Martínez

As pearl-clutching a scenario it is to conceive, if NPR radio host Ira Glass hadn’t stumbled upon a particular late-night comedy show in Chicago years ago, we might not have ever learned of David Sedaris, a man many regard as one of the today’s best humorists. The rock star treatment he now enjoys could be attributed to the bold imperfection of his stream-of-consciousness style and the curious Alice B. Toklas-like presence of his real-life partner, Hugh. In January, the audio version of his recent book of essays, Let’s Explore Diabetes with Owls, was nominated for a Grammy in the Best Spoken Word Album category (a near-compliment losing to “truthiness” icon Stephen Colbert) and his observations about everyday occurrences have attracted an astounding variation of young fans who seem to claim him, with a makeshift bookmark wedged half-way through any one of his older offerings, as a best-kept secret. Lately, his literary splash has undergone some fact-checking scrutiny from publications like The New Yorker, who seem to be forcing writers of his kind to define the difference between non-fiction vs. creative non-fiction (#whatevs). He can be heard on NPR’s This American Life saying the things we’re all thinking but afraid to say—perhaps for fear of sounding trite. Sedaris’ absence of that fear has made him a still-rising multimedia messiah. $25-$55, 3pm, Tobin Center for the Performing Arts, 100 Auditorium Circle, (210) 223-8624, tobincenter.org. —Jade Esteban Estrada