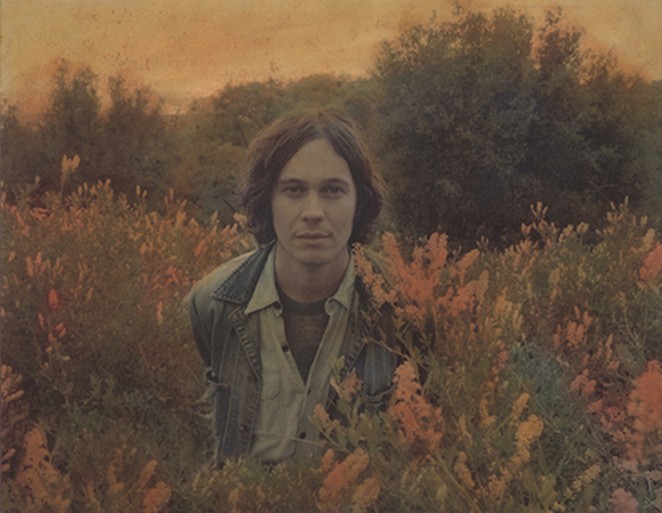 Ernest Greene, who creates under the mightily apt moniker Washed Out, rose to indie stardom in 2009 with the release of two fantastic EPs of hypnagogic electronic music. Something akin to dance music on a gigantic dose of Xanax, his style, which involved sampling and electronic composition, resonated as a part of a larger micro-genre surge known as “chillwave.” Greene’s subsequent releases have found him expanding on the blueprint he created, adding more live instrumentation and tighter song structures. Thursday, however, you can catch the man getting back to his roots as he performs a full DJ set. Free, 10pm Thu, Brass Monkey, 2702 N. St. Mary’s St., 480-4722. — James Courtney

When Robert L. B. Tobin passed away in 2000, The New York Times published a story that shed light on the San Antonio native (“a familiar and dramatic presence on the art scene” known for his “long white hair and beard and his flamboyant opera capes”), high-profile affiliations (including spots on the boards of New York’s Museum of Modern Art, the Santa Fe Opera and Italy’s Spoleto Festival) and vast art collection (“one of the most important theater design collections in the country”). Unsurprisingly, Tobin left the majority of his collection to the McNay, where his mother Margaret Batts Tobin had already built a wing in his honor. Encompassing 9,000 objects (from paintings and drawings to costumes and set designs), Tobin’s fascination with theater design comes to light in two new McNay exhibitions. While “All the Rage in Paris” looks at Serge Diaghilev’s Ballets Russes and the stylistic influence it had on early 20th-century Europe, “Design, Fashion, Theatre” uses rare volumes and portfolios to explore pochoir — a printmaking technique ingrained in both theatrical costumes and the fashion trends they inspired. $5-$10, 10am-9pm Thu, 10am-4pm Fri, 10am-5pm Sat, noon-5pm Sun, 10am-4pm Tue, McNay Art Museum, 6000 N. New Braunfels Ave., (210) 824-5368, mcnayart.org.
— Bryan Rindfuss

Excellent young rappers are a dime a dozen in Chicago — Saba Pivot, Chance the Rapper, Chief Keef, Vic Mensa, No Game Gypsy. It’s an endless competition, really, that leaves little breathing room for newcomers. But twenty-something rapper Mick Jenkins, a product of Chicago’s recent creative renaissance and poetry scene, has managed to rise above the local buzz. Jenkins’ debut mixtape, 2013’s Trees and Truth, left him penning free verse; it was loose, indistinct and poetically oblique. Boasting with acid-jazz production and biblical skits of Adam and Eve made the mixtape a favorite amongst local hip-hop savants. But it wasn’t until his recent The Water[s] that set him apart from Chicago’s saturated hip-hop scene. Where his first mixtape was jazzy in a general-sense, lazy guitar noodles and airy chords wash the new album with watercolor blues that sand out the rough edges of the heavy material. And it’s all in the voice. Mick Jenkins delivers in an introspective masculine voice that Chicago hasn’t seen in a while. Chance the Rapper is the manic schizophrenic, Chief Keef is the to-the-streets loose cannon while Vic Mensa is the carefree party-boy. Mick Jenkins is serious, and his shows are too. With Kirk Knight, Saba Pivot, No Name Gypsy. $15-$45, 8:30pm Fri, Alamo City Music Hall, alamocitymusichall.com.
— Alejandra Ramirez

Fun fact: A “blind tiger” was originally Prohibition-era slang for a speakeasy because all people did back then was sit around guzzling bootleg hooch and inventing awesome turns of phrase. Revisit the glory days of sightless jungle cats at the Blind Tiger Comedy Club, located appropriately enough, inside the Magic Time Machine. Local comic Jay Whitecotton will give comedy fans three chances Friday when he records his Stand Up! Records debut — which reportedly contains a bit titled “Family Trauma Rant,” proving he’s got a few turns of phrase he can call his own. Free, 8pm, 10pm & midnight Fri, The Blind Tiger Comedy Club, 902 NE Loop 410, 828-1470, blindtigercomedy.com. — Jeremy Martin

David Guerrero
The On & Off Fredericksburg Road Studio Tour started as a humble neighborhood art walk in 2007 and has grown into a three-day, multi-neighborhood, all-arts extravaganza, showcasing the diverse work of over 80 featured artists and a few hundred other visual, literary and performing artists. In its eighth year, On & Off Fred has the dual mission of promoting art and artists in the community and stimulating the interest in, and revitalization of, the area surrounding Fredericksburg Road. This year’s event kicks off with a reception and autograph party on Friday night at Bihl Haus Arts (2803 Fredericksburg Rd.) and includes two days of studio tours, as well as musical and dramatic performances. Admission for two to all of the On & Off Fred events, excepting Saturday night area theater performances, is secured with the purchase of the catalog, which is available digitally or in hardcopy. For details about participating studios or to purchase the catalog, visit onandofffred.org. $10-$15, 6-9pm Fri (reception and autograph party), 11am-6pm Sat, noon-5pm Sun (studio tour), 383-9723, onandofffred.org. — James Courtney 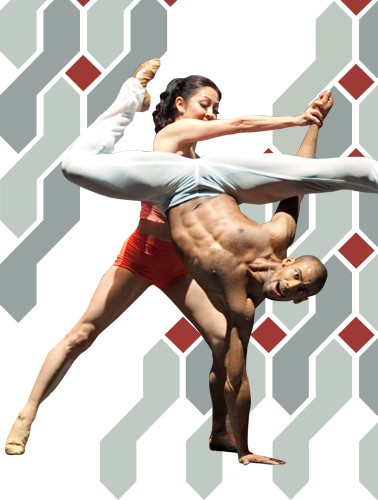 George Washington Carver once said, “Start where you are, with what you have. Make something of it. Never be satisfied.” After working with Alvin Ailey American Dance Theater, Dwight Rhoden and Desmond Richardson formed Complexions as a way to strip boundaries from contemporary dance. Twenty-one years later, their revered New York company has inspired audiences around the globe with its “continually evolving form of dance that reflects the movement of our world — and all its constituent cultures — as an interrelated whole.” The Carver welcomes the troupe for one night only. $35-$45, 8pm Sat, Jo Long Theatre, 226 N. Hackberry St., 207-2234, thecarver.org. — Murphi Cook

She’s lost more than 100 pounds since having weight-loss surgery in 2012, but stand-up comedian and self-described “Queen of Mean” Lisa Lampanelli still has a big, fat attitude and likes to flaunt it on stage. Currently on her Leaner Meaner tour, Lampanelli, 53, will swing by the Tobin Center for the Performing Arts on February 21. During an interview with the Current, she talked about what it’s like to be skinny, if she thinks she will ever lose her edge and having a show possibly hit Broadway. Read the full interview here. $29.50-$42.50, 8pm Sat, Tobin Center for the Performing Arts, 100 Auditorium Circle, 223-8624, tobincenter.org. — Kiko Martinez 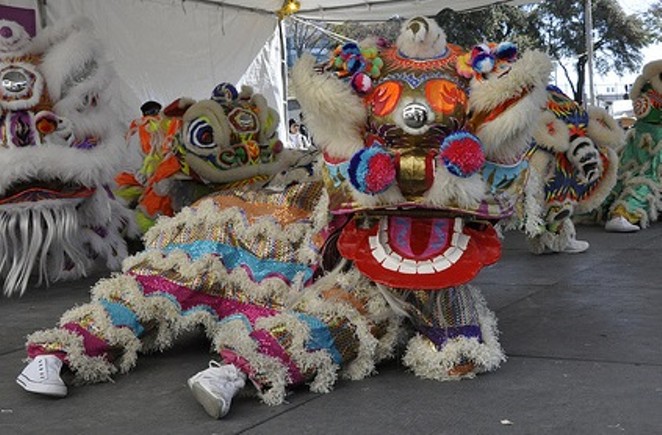 Held the week of Lunar New Year, Asian Festival is a celebration of the many cultures of Asia, from mainland China to the Indian subcontinent to the islands of the Pacific. Enjoy food, music, dance, martial arts demonstrations, a Lion Dance parade and more. While at the Asian Festival, stop by the Institute of Texan Cultures to view the new exhibit “Sikhs: Legacy of the Punjab.” Produced by the Smithsonian Institution, the traveling show explores the often misunderstood faith via displays of traditional Sikh art, ceremonial weapons and armor, and a model of the Golden Temple built in the Punjab region of India circa 1585. $5-$10, 10am-5pm Sat, Institute of Texan Cultures, 801 E. César E. Chávez Blvd., 458-2300, texancultures.com.

Richard C. Miller
James Dean on location for the film Giant in Marfa, Texas in 1955.
CineFestival, the nation’s longest-running Latino film festival, makes its annual return to the Guadalupe Cultural Arts Center February 21-28. The eight-day festival kicks off with the world premiere of the 2015 film Childern of the Giant. Returning to the director’s chair after six years, Hector Galán transports audiences back into cinematic history with a documentary about the making of the Academy Award-winning film Giant, which was shot in Marfa, Texas during the summer of 1955. Through archive footage and interviews with authors, journalists and the like, Galán conveys the story effectively with a particular focus on how Giant became a social-issue hot button during that time. The doc is especially interesting when Galán turns the camera on the Mexican-American residents, who were cast as extras in the film as kids. Read our full CineFestival here. $15, 7pm Sat, Guadalupe Theater, 1301 Guadalupe St., 271-3151, cine.guadalupeculturalarts.org. — Kiko Martinez