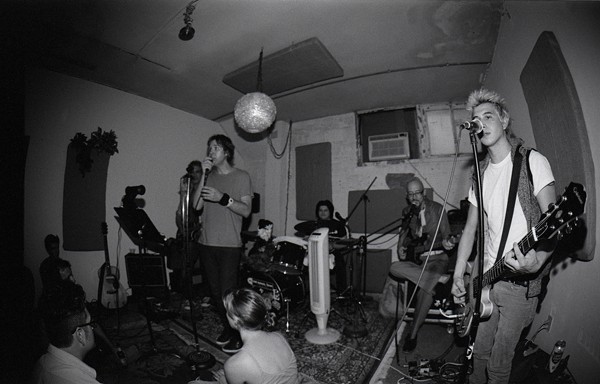 Around these parts, art-rock lifers Buttercup hardly need an introduction. They make songs about our city and songs about everything else, too. They make silly songs and important songs and old-school rock ‘n’ roll songs and indie-rock songs and so much more. All that they do is imbued with a sense of lightness and humor, which lends their music an infectious feeling of buoyancy, especially in the live setting. The trio will be joined on this special evening by nuevo-San Anto-soul crooner Alyson Alonzo, who is enjoying a well-deserved and criminally overdue buzz of late. $10, 8pm, Charline McCombs Empire Theatre, 226 N. St Mary’s St., (210) 226-5700, majesticempire.com. — JC

The Black Lips are one of the few rock ‘n’ roll bands in operation that truly don’t give a fuck. The first time I saw the Atlanta quartet, they were filming a movie with Val Kilmer and encouraged the crowd to throw stuff at the bloated actor (I managed to nail the former Batman with a water bottle, a résumé achievement.) The next time, guitarist Cole Alexander tossed a meat plate onto the crowd, inventing the deli-style mosh pit. It’s for this reason, and the band’s sloppy tenure of perfect garage, that I can think of a handful of San Antonio bands that just want to be “Bad Kids.” With Steve ‘N’ Seagulls, The Bolos. $16, 7pm, Paper Tiger, 2410 N. St. Mary’s St., papertigersa.com. — Matt Stieb

Although he passed away in 2006 at the age of 20, media artist Josiah Miles Neundorf’s creative spirit lives on through the juried festival his parents founded in his memory. Now in its ninth year, Josiah Media Festival is a magnet for outstanding shorts created by filmmakers under 21. Representing talent from the U.S., India, Australia and beyond, the 2015 program showcases all 12 winning films in four categories (narrative, animation, experimental and documentary) during three screenings that culminate in an awards ceremony and Sykpe chats with winners around the world. $10, 7pm Fri, 2pm & 7pm Sat, URBAN-15, 2500 S. Presa St., (210) 736-1500, josiahmediafestival.com. — BR

Courtesy of
Broadway
Sixteen years before Vladimir and Estragon wandered across the stage in Waiting for Godot, another pair of rootless males, George and Lennie, were making their way through Depression California. John Steinbeck constructed his short 1937 novel Of Mice and Men as if it were a play, and the work — Steinbeck’s most successful after The Grapes of Wrath — has proven remarkably adaptable: three film versions, an opera and countless stage productions, including a Broadway revival last year starring James Franco and Chris O’Dowd. The metalcore band that calls itself Of Mice and Men performed in San Antonio last May, but a version of Steinbeck’s work is now on stage at the Cellar Theater. Director Jim Mammarella and Michael Holley, who plays Lennie Small, the slow-witted but gentle hulk, worked together last July in Water by the Spoonful. They are joined by versatile Andrew Thornton (True West, God of Carnage, Wittenberg) playing George Milton, Lennie’s more responsible friend. True to the Robert Burns poem from which it borrowed its title, Of Mice and Men is the fatalistic story of how benign intentions are frequently scotched — in Burns’s words, “gang aft agley.” $12-$30, 8pm Fri-Sat, 3pm Sun, Cellar Theater, The Playhouse, 800 W. Ashby Pl., (210) 733-7258, theplayhousesa.org. Through Oct. 11. — Steven G. Kellman

Organized by progressive pop band RMRS, Something Good Fest combines a showcase of SA talent with fundraising for the at-risk community. RMRS, Lonely Horse, Deer Vibes and nimble instrumentalists Bright Like the Sun join 13 other bands, vendors and live painters on the bill. Cans from the San Antonio Food Bank’s 12 Most Wanted list mean discounted admission and $1 from each ticket will go to arts nonprofit SAY Sí. With this combination of altruism and genreless music, Viva TacoLand gets a bit closer to its reputation under the late, great, irate Ram Ayala. $10-$12, 3pm, Viva TacoLand, 103 W. Grayson St., (210) 368-2443, vivatacoland.com. — Matt Stieb


Sat 9/19
The Oppression of the Oppressed

Of the 2.3 million individuals incarcerated in the U.S., a disproportionate amount are people of color. After years of volunteering, speaking and mentoring men in prisons, writer/playwright Maximo Anguiano decided to use his words to help fix this broken system. Based on true events, The Oppression of the Oppressed explores harsh realities of America’s prisons, touching on the war on drugs, mental health and capital punishment. In an effort to “open dialogue and facilitate change in the criminal justice system,” Anguiano’s reading will be followed by a Q&A with community members and justice-based organizations. Free, 2-5:30pm, Museo Guadalupe, 723 S. Brazos St., (210) 271-3151. — MC

The Gridiron show is locally written, performed and produced theatrical production that satirizes politics and local news events of the past year. It includes skits and musical numbers that poke fun at San Antonio politicians and events. The show includes the presentation of the Most-Panned Award to the local newsmaker who has received the most negative media attention in the past year. $30-$50. 7:30pm Saturday; McAllister Auditorium, 1300 San Pedro Ave., (210) 486-0497.

Over the past two decades, UK native Scott Pepper fine-tuned his signature blend of magic, illusions and comedy in venues across Europe and aboard many a Disney Cruise Line. The touring entertainer’s latest combines hand tricks, daring escapes and audience participation in a kid-friendly spectacle surrounding a secret society of magicians who use their skills “to take on dangerous missions and make the world a safer place.” $10-$15, 7pm Saturday-Sunday, Magik Theatre, 420 S. Alamo St., (210) 227 2751.