Rap is weird in 2015. Dr. Dre works for Apple, Kanye makes ugly sneakers and Gucci Mane is in jail again. But the Trap God managed to influence all of Atlanta before suiting up in correctional orange, prioritizing luxury and absurdity over any inkling of lyricism. The most opulent of his 404 acolytes is Migos, a family project dedicated to splendor, the soirée and the house of Versace. On their 2013 hit “Versace,” the hook is but 18 repetitions of the brand. In their videos, the Visa-maxed outfit features leopards, cheetah-print fashions and the stoppage of time — too fresh for relativity. $40-$75, 9pm Thu, Club Rio, 13307 San Pedro Ave., (210) 403-2582,
club-rio.net. — Matt Stieb 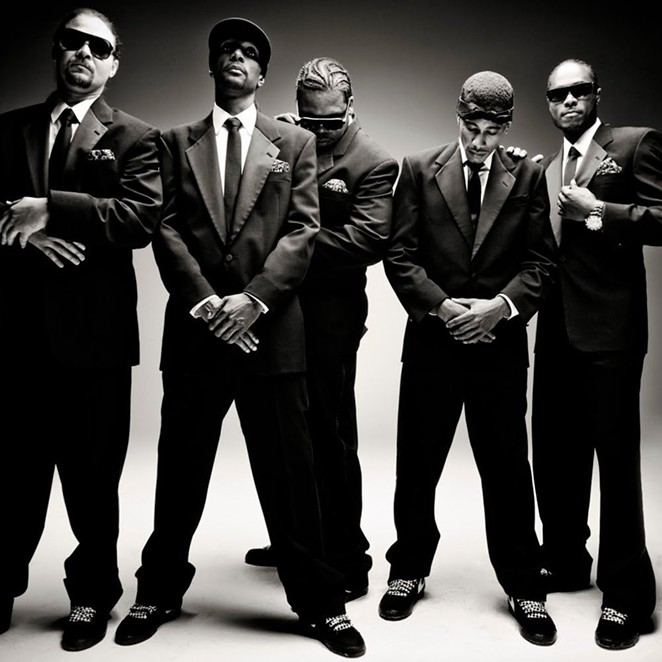 Shoutout to the nostalgic promoter that put this badass ’90s revue together. Lone Star legend and UGK co-founder Bun B is the home-state favorite, pulling out his collected 36-chain hits. After performing in full Cypress Hill regalia at Maverick Music Festival earlier this year, B-Real returns with the agro-nasal delivery that made him one of the first Mexican-American stars of the form. Cleveland’s Bone Thugs-N-Harmony (pictured) also visit SA for the second time this year — in preparation of their upcoming 11th album E. 1999 Legends. With Scarface, El Gant feat. Sid Wilson of Slipknot, Kurtanz. $36-$151, 7pm Thu, Alamo City Music Hall, 1305 E. Houston St., alamocitymusichall.com. — MS Unlike its singing competition corollaries, NBC’s Last Comic Standing has been a reliable pool of comic talent for nine seasons and counting. Weed hero Doug Benson, whip-smart Nikki Glaser and the unstoppable Amy Schumer all have the show to thank for national airtime and an invaluable momentum boost. On Thursday, the top five talents of the 2015 season come through SA with their tightly coiled and TV-tested material. Naturally, winner Clayton English (pictured) is the prize catch of the quintet, a comic with nonchalant delivery and A-material on police treatment of African Americans. $24.50-$92.50, 7:30pm Thu, Tobin Center, 100 Auditorium Circle, (210) 223-8624, tobincenter.org. — MS 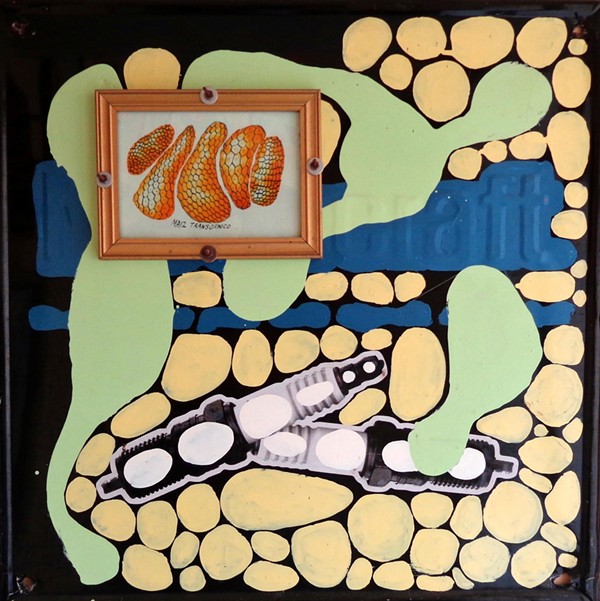 Cisco Jimenez, Maíz transgenico
As NASA explains it, sunlight — comprised of every color of the rainbow — scatters as it enters Earth’s atmosphere; since blue light travels in the shortest, choppiest waves, the sky often appears blue. But as an exhibition title, “Why Is the Sky Blue?” hints at something unanswerable. Curated by Octavio Avendaño Trujillo, the group show explores a “shift within the modern tradition of abstraction” as seen by a dozen artists from across the U.S., Mexico and Argentina. New Jersey transplant Nate Cassie, local fixture Jesse Amado and the late great Chuck Ramirez jump out among the recognizable names. Free, 6-8pm Thu, Ruiz-Healy Art, 201 E. Olmos Drive, (210) 804-2219, ruizhealyart.com. — BR

Hailing from Southeast San Anto and packing a plethora of defiant queer attitude, Pink Leche makes music that’s a delightful and wholly unique mishmash of house, R&B, post-punk and screw. This Friday, you can catch the lovely Leche in action as he celebrates the release of a new split EP with local, texture-mad electronic producer Xy!o. Entitled House of Relaxation, the EP is a veritable study in chill, presenting a wildly wide palette of influences, styles and moods. And, as has become a local tradition with Pink Leche shows, the EP release promises to be a party par excellence. Free, 10pm Fri, Bottom Bracket Social Club, 1603 N. Colorado St., (210) 267-9160, facebook.com/bottombracketsocialclub. — James Courtney

If you’ve ever dined at Rosario’s, SoLuna or Chez Vatel Bistro, you may have noticed the work of Gilbert Durán, a self-taught artist whose mastery with a paintbrush lends itself to everything from traditional wildlife paintings to irreverent takes on iconic works by Botero, Kahlo and Warhol. Possibly best known for his wry remix Frida Margarita (not to mention a supersized fork that got Stone Oak’s panties in a bunch), the self-dubbed artist non grata’s latest brings together a number of “secret” paintings and sculptures, maquettes for unrealized public art projects and a gleaming tribute to the Spurs. Free, 4-8pm Fri, Studio 911, 911 S. St. Mary’s St., duran-arte.com. — BR

Founded in 1965 and now designated as Texas’ first and only independent art college, the Southwest School of Art is set to celebrate a half century of “visual art education, artistic innovation, community evolution and historic preservation.” Complete with a commemorative T-shirt designed by Gary Sweeney (free for the first 50 guests) and “first 50” art giveaways, the weekend-long party takes over both SSA campuses with creative fun for all ages. After kicking off with a members-only preview (4-6pm Fri), Articopia rallies artists and artisans from the Alamo City and Austin for an “eclectic holiday shopping” experience filled with everything from clothing and jewelry to glassware and photography (6-8pm Fri, 10am-5pm Sat, Ursuline Campus). Designed to encourage young artists and “educate teens and families about arts programming,” the Downtown Teen Collective’s inaugural Teen Arts Fest connects the Navarro Campus with downtown neighbors Artpace (445 N. Main Ave.) and Central Library (600 Soledad St.) via musical performances, workshops and a juried exhibition (1-5pm Sat). And on Sunday, the school opens its studios for tours and demos led by faculty and students (1-5pm Sun) and unveils exhibitions showcasing works by ceramicist and longtime SSA educator Dennis Smith, Austin-based photographer Christa Blackwood and the winners of a Fotoseptiembre Instagram contest (1-3pm Sun). Free, 4-8pm Fri, 10am-5pm Sat, 1-5pm Sun, Southwest School of Art, 300 Augusta St. & 1201 Navarro St., (210) 224-1848, swschool.org. — BR

In the spirit of anything you can do, I can do better, but with our signature humility and disinterest in all of Bexar County becoming a parking lot, San Antonio is set to be one of the five cities to host the first Untapped Indie Music and Beer Fest, which is a curated attempt by its promoters and sponsors to bring, not the greatest amount of music and beer to us — à la several acronym-laden festivals that take place annually up I-35 — but the best music and beer. Similar versions of the festival will be taking place or have taken place in Austin, Dallas, Forth Worth and Houston, all boasting honor rolls of bands and beers … but none of the rest have GZA! Other acts on the bill include Metric (pictured), Tokyo Police Club, Saint Motel, Nina Diaz, Mirachi Nuevo Estillo, King Pelican, Ellis Redon and Los Callejeros De San Anto. $33-$65, 3:30-10pm Sat, Lone Star Brewery, 600 Lone Star Blvd., untapped-festival.com. — D.T. Buffkin