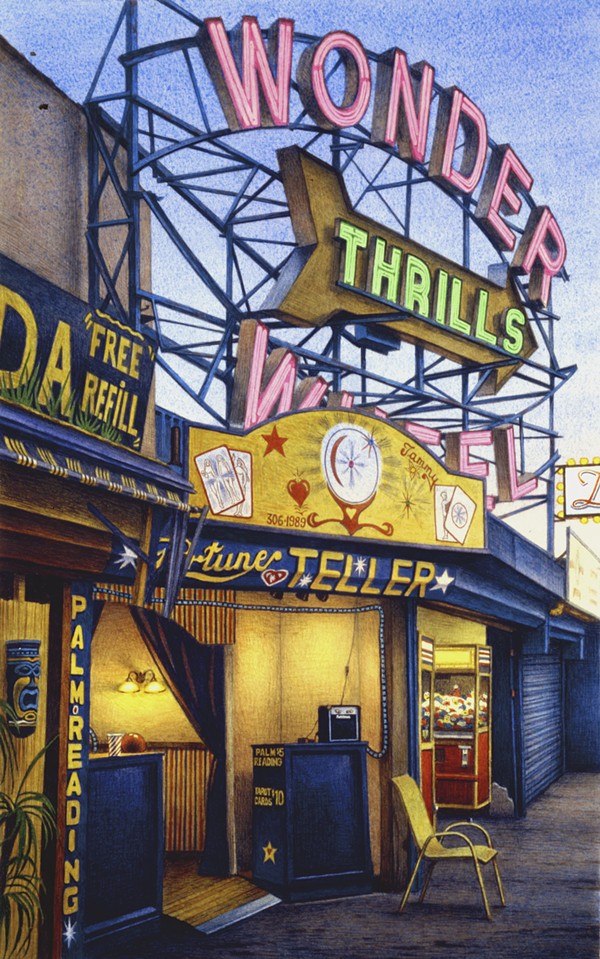 Frederick Brosen, Fortune Teller, Jones Walk, Coney Island, 2008, Courtesy of Hirschl & Adler Modern, New York.
Fitting for the locale that introduced the nation to roller coasters, Coney Island has seen its fair share of ups and downs. Possibly named by the Dutch in honor of the resident rabbits (or “coneys”) that once hopped its shores, the Brooklyn attraction evolved in tandem with the advent of three key amusement parks — Steeplechase Park, Luna Park and Dreamland — that lured guests with bathhouses, ballrooms, sideshow acts and spectacles ranging from elephant rides to a “Human Roulette Wheel.” Marked by devastating fires, ambitious reinventions and hefty doses of crime and prostitution, the beachfront destination earned a reputation as both “America’s Playground” and “Sodom by the Sea.” Home to the weathered wooden roller coaster the Coney Island Cyclone (opened in 1927), Charles Hermann’s iconic Wonder Wheel (opened in 1920) and the Coney Island History Project Exhibition Center (opened in 2004), the legendary landmark comes to light locally via “Coney Island: Visions of an American Dreamland, 1861-2008,” a touring show making the McNay its sole Southwestern stop. Organized by Connecticut’s Wadsworth Atheneum Museum of Art and on view through September 11, the exhibition explores Coney Island not just as a place but as “an idea” that courses through more than 140 objects — from circus posters and sideshow banners to carousel animals and photographs by the likes of Diane Arbus and Walker Evans. $10-$20, 10am-9pm Thu, 10am-4pm Fri, 10am-5pm Sat, noon-5pm Sun, McNay Art Museum, 6000 N. New Braunfels Ave., (210) 824-5368, mcnayart.org. — Bryan Rindfuss

Henry Koerner, The Barker’s Booth, 1948–49, Collection of Alice A. Grossman