Frederick Brosen, Fortune Teller, Jones Walk, Coney Island, 2008, Courtesy of Hirschl & Adler Modern, New York.
Fitting for the locale that introduced the nation to roller coasters, Coney Island has seen its fair share of ups and downs. Possibly named by the Dutch in honor of the resident rabbits (or “coneys”) that once hopped its shores, the Brooklyn attraction evolved in tandem with the advent of three key amusement parks — Steeplechase Park, Luna Park and Dreamland — that lured guests with bathhouses, ballrooms, sideshow acts and spectacles ranging from elephant rides to a “Human Roulette Wheel.” Marked by devastating fires, ambitious reinventions and hefty doses of crime and prostitution, the beachfront destination earned a reputation as both “America’s Playground” and “Sodom by the Sea.” Home to the weathered wooden roller coaster the Coney Island Cyclone (opened in 1927), Charles Hermann’s iconic Wonder Wheel (opened in 1920) and the Coney Island History Project Exhibition Center (opened in 2004), the legendary landmark comes to light locally via “Coney Island: Visions of an American Dreamland, 1861-2008,” a touring show making the McNay its sole Southwestern stop. Organized by Connecticut’s Wadsworth Atheneum Museum of Art and on view through September 11, the exhibition explores Coney Island not just as a place but as “an idea” that courses through more than 140 objects — from circus posters and sideshow banners to carousel animals and photographs by the likes of Diane Arbus and Walker Evans. $10-$20, 10am-9pm Thu, 10am-4pm Fri, 10am-5pm Sat, noon-5pm Sun, McNay Art Museum, 6000 N. New Braunfels Ave., (210) 824-5368, mcnayart.org. — Bryan Rindfuss

Although raised in a family of “fierce atheists,” Boston-based sculptor and printmaker Liz Shepherd developed a fascination with “the human search for meaning through faith.” Inspired by the motifs associated with Jacob’s Ladder, her project “Up and Out” presents ladders and staircases not so much as potential routes to Heaven but precarious points of departure and steps into the unknown. Encompassing multicolored ladders cast in resin, stairs made from reclaimed doors and prints on bedsheets, Shepherd’s “Up and Out” takes shape in a site-specific installation in Artpace’s Hudson (Show)Room through August 28. Free, 6-9pm Thu, Artpace, 445 N. Main Ave., (210) 212-4900, artpace.org. — BR

In his decidedly postmodern works, internationally bestselling author David Shields reveals rich and complex layers of psychological and social meaning through a truly unique approach to composition, which involves eschewing all traditional notions of narrative and casting off the constraints of the fiction vs. non-fiction dichotomy. His works, including most recently War Is Beautiful — a striking, multifaceted send-up of how The New York Times legitimizes endless war by depicting it in aesthetically pleasing images on its front page — call us to embrace a new literature as dynamic as the times in which we live. Shields, an impressively prolific writer and proponent of a technique he calls literary collage, has authored 20 books, garnering especially high praise for Reality Hunger (2010), The Thing About Life Is That One Day You’ll Be Dead (2008) and Black Planet (1999). He is a consummate innovator who has, in a rather singular feat, managed to endear himself to the guardians of the canon every bit as much as he’s endeared himself to those who just want to watch the literary world burn. For Shields, great literature is a call to evolve in a multitude of ways, and new concepts and treatments will always demand new forms. In a rare opportunity presented by Gemini Ink, you can catch Shields reading from his impressive oeuvre this Friday at Trinity University. Free, 7-8:30pm Fri, Chapman Center Auditorium, Trinity University, One Trinity Pl., (210) 734-9673, geminiink.org. — James Courtney

In a gathering of forces that can only be fated by the gods of some supremely menacing hip-hop netherworld, Limelight is presenting one hell of a Friday the 13th show this week. At the top of the bill, Minneapolis noise-rap outfit Moodie Black plies a positively excruciating form of horror-enthused hip-hop that’s as jarring as it is without precedent. Local support will be provided by SA’s Ghost Palace (among others), a more traditional hip-hop act that nevertheless keeps its lyrical focus on the darker, grittier side of things, and its production in
the urban gothic vein. $5, 9pm, Limelight, 2718 N. St. Mary’s St., (210) 735-7775, thelimelightsa.com. — JC 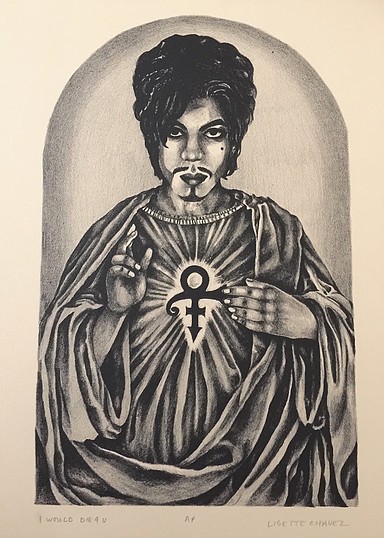 Therese Spina
It may seem like a benign occupation — to organize a music festival — but Juan Tejeda (who is the lead faculty member for the Mexican-American studies program at Palo Alto College) has been hard at work fighting for, not only the proliferation of the people's music in la frontera, but also for the education, unity and fellowship that comes with it. As a professor at Palo Alto, as a musician and as the central figure behind the annual Tejano Conjunto Festival, now in its 35th year and still going strong, Tejeda has been entrenched in la lucha, the struggle. He has been advocating for the teaching and sharing of this culturally significant world music, which was born right here, in our backyard, pulling its influences from Texas and Mexico's shared ancestries, since the first festival in 1980. Highlights from this year’s lineup include Los Clavos del Wesso, The Hometown Boys, Los García Bros. and Jaime y Los Chamacos (Friday); Conjunto Student Showcase, Conjunto Deltaboyz, Los Badd Boyz del Valle, Lázaro Pérez y su Conjunto, Los Fantasmas del Valle and Boni Mauricio y Los Máximos (Saturday); and Eva Ybarra y su Conjunto, Dwayne Verheyden, Los Texmaniacs de Max Baca, Flaco Jiménez y su Conjunto, Ricky Naranjo y Los Gamblers and Roberto Pulido y Los Clásicos (Sunday). Click here for our Q&A with Tejeda and here for our festival picks. $12-$15 per day, $40 for a festival pass, 5:30pm-midnight Fri, noon-midnight Sat, 1-10pm Sun, Rosedale Park, 340 Dartmouth St., (210) 271-3151, guadalupeculturalarts.org.
— Travis Buffkin

Isolating a thing from its normal context and reimagining its constitution can yield a host of new perspectives, on the thing itself and on adjacent concepts. This is the principle behind a new Freight Gallery installation by Toronto-based artist Katie Kehoe, with a little help from locals, including
artist Jen Frost Smith. Kehoe is traveling the Southwest, collaborating with folks to construct temporary piers out of waste materials. Titled “PIER/Platforms,” the installations are meant to stick out, raise questions
and inspire reflection on the environmental crisis we are facing. Free, 7-10pm Sat, Freight Gallery & Studios, 1913 S. Flores St., (210) 331-4382, pierplatforms.blogspot.com. — JC

Jason Reed, Border Dialogue
As a means to deconstruct the current immigration landscape in both local and global terms, the International School of the Americas (ISA) and Borderland Collective collaborated on an intensive art/research-based project during the 2015-2016 academic year. In this inquiry-based course, students analyzed the U.S.-Mexico border through multiple historical, theoretical and pragmatic contexts. Yet rather than simply consume, they unpacked these complex issues through photography, drawing, oral histories, journaling, writing and mapping projects. Free, 7-10pm Saturday; AP Art Lab and SMART Space, 1906 S. Flores St., borderlandcollective.org.

The Witte debuts its new 10,000-square-foot Mays Family Center with the Texas premiere of “Maya: Hidden Worlds Revealed.” Suitable for archaeology buffs of all ages, the immersive exhibition combines interactive displays with a plethora of artifacts (more than 200) to educate visitors on the civilization’s major cultural accomplishments (including its famous calendar system) and provide a glimpse into the lives of ancient Mayans via authentic examples of both everyday objects and finely crafted works of art. $15-$20, 10am-5pm Sat, noon-5pm Sun, Witte Museum, 3801 Broadway, (210) 357-1910, mayasa.wittemuseum.org. — Kelly Merka Nelson

Join tokusatsu fans from across the city for a screening of the 1966 Japanese monster movie Gamera vs. Barugon, the second of eight kaiju films in the franchise’s Showa era. Watch the fire-breathing turtle monster Gamera battle it out with the LGBT-friendly lizard monster Barugon (it emits a rainbow from its back) and then stay for special guest appearances by comic book artist Matt Frank (Godzilla: Rulers of Earth) and author August Ragone (Eiji Tsuburaya: Master of Monsters). Proceeds from the event benefit earthquake relief efforts in San Antonio’s sister city of Kumamoto, Japan. $10, 7-10pm Sun, Alamo Drafthouse Westlakes, 1255 SW Loop 410, (210) 677-8500, mechagorilla.com. – Kiko Martínez