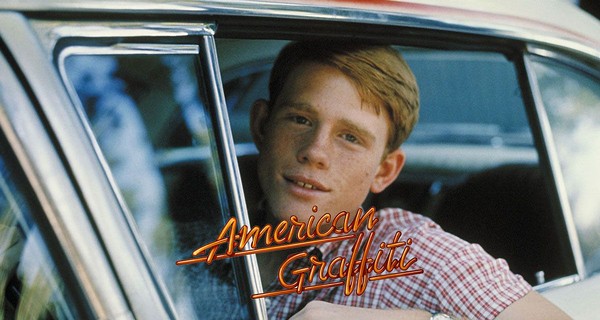 Courtesy of Lucasfilm
While writer-director George Lucas’ debut THX 1138 gave viewers an Orwellian nightmare in a distant dystopian future, his follow-up, 1973’s American Graffiti, offered an idealized look at a halcyon past recent enough for most of the audience to misremember right along with the auteur. With a tagline asking “Where were you in ’62?” Graffiti served up cinematic burgers,
fries and shakes aplenty via roller-skating carhops. Drag races, doo-wop and Wolman Freaking Jack himself abound for an ensemble of fresh faces in a single, magical summer night between high school and college. Happy Days, Laverne & Shirley, The Wonder Years, et al. would follow suit, and sequel More American Graffiti would put its blissfully ignorant innocents through LSD trips, marriage and the Vietnam War, but the original freeze-frames its cast of characters before the realities of adulthood and, tellingly, the assassination of John F. Kennedy have a chance to take hold. Thursday’s outdoor screening, featuring live music and a classic car show at the site of an old drive-in theater, has gotta be the best possible place to watch it in 2016. Free, 7pm Thu, Mission Marquee Plaza, 3100 Roosevelt Ave., slabcinema.com. – Jeremy Martin

Edward Benavides
Mirroring its 1991 premiere performance, the Guadalupe Dance Company marks its 25th anniversary with a bang on Diez y Seis de Septiembre. Celebrando Tradiciones will pull out all the stops. Accompanied by the Mariachi Azteca de America, the company will perform newly choreographed works by members of the Asociación Nacional de Grupos Folklóricos as well as some of its favorite dances, including the traditional Danzas Aztecas. The night kicks off with a pre-show pachanga, a silent auction (with a guitar signed by Tejano/conjunto artists among the notable items), and food and drinks available for purchase. After the company’s performance, the party continues with a post-show fiesta. This jam-packed event will give you a taste of Mexico’s colorful traditions as well as a glimpse of its artistic future with an evening that satisfies all the senses. $25, 7pm Fri, Guadalupe Theater, 1301 Guadalupe St., (210) 271-3151, guadalupeculturalarts.org.
— Kelly Merka Nelson 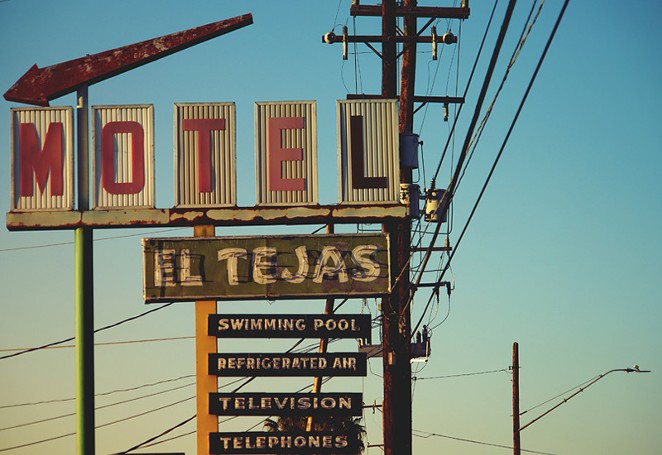 Wendy Bowman
San Antonio-born, NYC-based artist and photographer Wendy Bowman brings her old hometown a thoroughly engrossing look at one of its most vibrant neighborhoods in her Fotoseptiembre exhibition entitled “Southtown.” In the newly created series, Bowman returns home, wearing the hat (and garnishing the lens) of a native and interloper at once. Her focus on the Southtown area, however, produces results that are unlike those likely to be duplicated by just any tourist with a camera. She’s not only a skilled photographer with a keen artistic vision, but she knows this place; its humor, its pain, and its complexities. As such, Bowman brings life to subjects here, through her shooting, processing, and framing, that may be overlooked or deemed unimportant by someone who has never been intimate with the place. Free, 6-8pm Fri, AnArte Gallery, 7959 Broadway, Suite 404, (210) 826 - 5674, fotoseptiembreusa.com. — James Courtney

Courtesy of Jimmy James
It's safe to say Jimmy James boasts one of the more colorful careers ever launched in San Antonio. Born James Jude Johnson in Laredo in an undisclosed year (he's "older than Britney but younger than Madonna"), he started impersonating Marilyn Monroe on a whim in the early 1980s and perfected the act flawlessly enough to land in an Atlantic City revue that led to talk show appearances (from Donahue to Geraldo), performances at high-profile events (for the likes of Whoopi Goldberg, Joan Rivers and Elton John) and national advertising campaigns (including L.A. Eyeworks and Kenar). Although possibly known better by younger audiences for his original club hit "Fashionista," James is a wildly talented vocal impressionist who shifts effortlessly between such iconic voices as Cher, Elvis, Barbra Streisand, Judy Garland and Eartha Kitt. On Friday, James brings San Antonio another dose of "Hearing Is Believing," a cabaret style performance combining original songs, impressions and tributes ranging from "Hey There Lonely Girl" (Eddie Holman) to a "Disco Diva Medley" featuring the voices of Sylvester, Alicia Bridges, Donna Summer and Bette Midler. $20-$25, 10pm Fri, Sept. 16, Babio’s, 527 W. Hildebrand Ave., (21010 409-7245, brownpapertickets.com.  — BR

Courtesy of Violet Chacki
When people hear the term “burlesque” some still think of that 2010 film with Christina Aguilera. For others—like performers Lita Deadly, Jasper St. James and Dino Foxx—it’s a more nuanced label, one associated with radical, freeing self-expression. Those performers will shake up the city this weekend with San Antonio’s fifth annual San Antonio Burlesque Festival. Attendees will see everything from burlesque and sideshow to drag and aerial acts, says Lita Deadly, founder and producer of the festival who’s been involved in the burlesque scene for several years. Organizers say the festival showcases both classical and neo-burlesque, which can incorporate comedy and satire or political motivation. The festival will feature politically motivated acts that involve gender-bending, and something called “nerd-lesque,” where performers cosplay on stage and create a story through intentional choreography. This year’s headliners include Violet Chachki (pictured), Perle Noire, Chola Magnolia, Dusty Summers and J.D. Hickcock. $20-$50, 8pm-midnight Fri-Sat, Woodlawn Theatre, 1900 Fredericksburg Road, (210) 267-8388, sanantonioburlesquefest.com.  — Kelsey Valadez

Marc Arevalo
Having captured the attention of San Antonio’s fashion scene with the dark, daring drama of “Salvation” (2014) and the chic Parisian vibe of “Je Suis Une Femme” (2015), self-taught designer Leighton Whittington is readying his third Leighton W. Couture collection for a big reveal at the Mission Control 17 Building (home to San Antonio Sound Garden and Co Lab). Ranging from “leather viscose blazers and the new ‘smoking’ pant to body-hugging cocktail minis and spiked bomber jackets,” his “Collection Trois” explores punk not so much as a genre or style, but as a rebellious attitude and state of mind. Encompassing shapes and sensibilities from various decades leading up to punk’s heyday in the 1980s, the 21 new looks (to be worn by 17 models) take shape in a precise palette of black, metallics and jewel tones accented with an abundance of draped chains and shimmering sequins. But it’s not all evening wear. One of the collection’s more rebellious statements arrives in the form of an embroidered and crystal- embellished T-shirt emblazoned with “Fuck Couture.” $45 (includes complimentary beverages from Chloe Wine Collection), 7-10pm Sat, Mission Control Building, 723 N. Alamo St., leightonw.com. — BR

Courtesy of Sweet Peach Collective
Founded in 2013 by San Antonio native Amanda Bartlett as a means to highlight “the perspective of local artists that identify as female,” Sweet Peach Collective champions a street-smart aesthetic that’s both playfully nostalgic and pointedly irreverent. Inclusive of “every medium imaginable” (ceramics, metalworking, embroidery and painting, to name a few), the collective’s latest brings together 40-plus “Peaches” from Texas and beyond for a party-minded showcase featuring live music by Polly Anna (8pm), Silencia (9:30pm) and Topo Chica (11pm), plus vegan-friendly eats from Mama Tierra and Zucchini Kill Bakery, and complimentary trash-can punch till it runs out. A portion of proceeds from the $5 cover benefits the Battered Women’s Shelter of San Antonio. $5, 7-11:30pm Sat, K23 Gallery, 702 Fredericksburg Road, (210) 776-5635, sweetpeachcollective.com. — BR

AE Photography
In observation of Mexican Independence Day, the Asociación de Charros de San Antonio hosts an afternoon charreada (often likened to a Mexican rodeo) comprising an array of competitive roping and riding events, including el Paso de la Muerte, “The Pass of Death.” Designed to promote Mexican culture and preserve its history, the charreada is an official event of the City of San Antonio’s Diez y Seis de Septiembre Commission and will showcase some of San Antonio’s finest charros. The organization’s second-largest event of the year, the Día de Independencia Charreada typically draws guests from near and far, and kicks off with pre-show entertainment from ballet folklórico dancers and mariachis along with food and drinks available for purchase. $5-$10, 3-6pm (gates at 2pm) Sun, Charro Ranch, 6126 Padre Drive, (210) 225-2287, sacharros.org. — KV

Courtesy of Melvins
Say goodbye to summer with one of the U.S.’ baddest groups of hot-rock, hearing-impairing savants. This show is an SA revelation and should put any doubting mind at ease about the recent Transmission Events fracture and whether Taco City can host indie royalty. To earplug or not to earplug? That is the question. $17, 7pm Sun, Paper Tiger, 2410 N. St. Mary’s St., papertigersa.com.