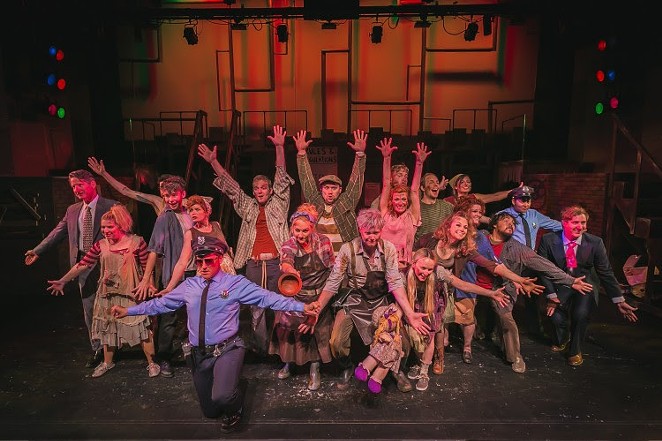 Daniel Baumer
The Playhouse stages a production of Greg Kotis’ comedic story of socio-economic oppression, capitalism, corporate greed and the individuals willing to fight for freedom of urination. Inspired by his encounter with a pay-per-use toilet while traveling through Europe, Kotis began writing Urinetown in the late ’90s. Teaming up with composer Mark Hollmann, he brought the satire to the stage in 2001. A 20-year drought impedes water accessibility in a small town, forcing local government to issue a ban restricting the use of private toilets. The impoverished citizens must pay to use the town’s dirtiest restroom — Public Amenity #9. Those who refuse are shipped off to a penal colony known as “Urinetown,” which none have returned from. Every day the citizens live among the filth, in fear of the amenity’s authoritarian supervisor, Penelope Pennywise (Nicole Erwin). The capitalist and greed-driven megacorporation, “Urine Good Company” (the UGC), has a monopoly over all public amenities, and is looking to increase restroom fees. Penelope’s assistant, Bobby Strong (Brendan Brady) loses his father to Urinetown, and begins to reconsider the town’s issues of social inequality and the UGC’s voracity. Caldwell, CEO of UGC, introduces his daughter, Hope (Emily Cleveland), as a new employee; however, she finds herself against the company’s agenda. Together Bobby and Hope long for a new world where people can pee freely, wherever, whenever, and on whomever they want. $12-$42, 8pm Fri-Sat, 3pm Sun, The Playhouse, 800 W. Ashby Pl., (210) 733-7258, theplayhousesa.org. — KR