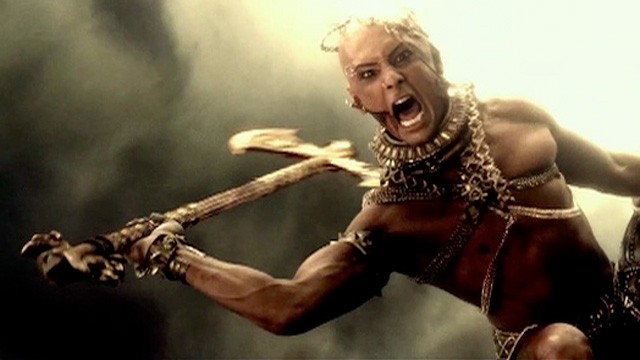 I once saw a concert in which the guys in the band decided they’d rather not step off the stage at the end of their set, regroup and then come out for an encore after their fans beckoned them with applause. So they played what they called the “lazy man’s encore” and never left the stage. They simply went right into the encore so they could make a quick exit without too much hassle. A sequel of sorts to 2007’s 300, the film based on the Frank Miller and Lynn Varley comic book, 300: Rise of An Empire introduces what we’ll call the “lazy man’s sequel.”

The film essentially functions as a retelling of the plot of its predecessor. On many levels, it ups the ante. The violence is harsher, the sex is rougher and the bare breasts are even bigger. The scenes of hand-to-hand combat are more extreme and involve the severing of more limbs (the blood practically shoots right off the screen thanks to the 3D effects). The speeches about freedom and honor are longer.

But the story isn’t better.

The movie essentially picks up where 300 left off—with the death of Spartan leader King Leonidas (Gerard Butler). Actually, he’s already dead and in the film’s opening scene, he appears lying face up with arrows protruding from his limp, bare-chested body. Tossed on a heap of Spartan bodies, he’s easy prey for Xerxes (Rodrigo Santoro), who takes a blade to the poor guy’s neck.

A series of flashbacks follow and we learn a bit more of the backstory concerning the feud between Persia and Greece. We see Themistocles (Sullivan Stapleton) shoot the arrow that kills the Persian king, sending his son Xerxes into a tailspin. But thanks to the strong-willed Artemisia (Eva Green) a cold-hearted warrior who spent some time as a Greek slave before breaking free and turning her resentment into full-blown revenge against the entire nation, he recovers and decides he’s a god. Dips himself in gold and hangs some piercings from his face so he looks the part. Just to prove his case, he goes to war with Greece and intends to wipe them from the history books.

The film then recounts many of the events that took place in 300—namely, the noble stand that Leonidas and his motley crew of 300 soldiers took against Xerxes before they were defeated thanks to that traitorous hunchback Ephialtes, who has a small cameo here.

A series of flash-forwards (seriously? How lazy could the screenwriters be?) ensues and Themistocles leads the Greek navy against the Persian navy in a set of brutal battles. Themistocles rams the flimsy Persian ships and does some serious damage in the process. Though he’s outmanned, he outsmarts his enemy on numerous occasions, leading Artemisia to make him an offer (in a sexually charged scene that’s almost laughable) if he’ll just back off. Though the two get all hot and heavy, they can’t agree on any kind of truce, and Themistocles returns to camp and warns his men that the scorned Artemisia is likely to take her frustrations out on them.

Desperate for Spartan support, Themistocles visits the Spartan Queen Gorgo (Lena Headey) to ask for help from their navy. Still mourning the death of her husband Leonidas, she tells him she’s not willing to sacrifice more Spartan lives even though she shares his hatred for the Persians. The film sets up a final battle between Xerxes/Artemisia and Themistocles and it’s not giving away too much to say the movie’s conclusion leaves more than a few loose ends. Not sure if there’s yet another sequel/prequel in the works, but it would certainly seem like it.

You’re likely to experience some serious déjà vu here. The movie recounts so much of 300’s plot that it seems redundant. And not all of director Noam Murro’s decisions here make sense. Queen Gorgo narrates the proceedings but doesn’t figure much in the movie. Butler’s absence is notable. He was, after all, that film’s driving force.

While Headey plays Gorgo with the same steely determination as she did in 300, her role here is diminished. And some of the new characters aren’t so compelling. Stapleton doesn’t have the charisma to pull off his role as the Greek leader. And the same goes for Green, whose attempts to make her character into a seductress fall short.

The film certainly looks as sharp as 300 did. Murro really nails the visuals and deserves credit for making it resemble a graphic novel. A better script would have gone a long way in making this movie a more satisfying companion piece.