7 Flicks to See at the San Antonio Film Festival

The Ur-steroid user of the MLB, Jose Canseco has been notoriously brash through the juice scandals and Senate hearings that have plagued pro baseball in the 21st Century. In The Truth Hurts, Canseco and director Bill McAdams Jr. go through 60 minutes of interviews and clips from the stadium and the courtroom documenting Canseco's career as an Oakland A's slugger and anabolic whistleblower.

"OUT" 8pm Thurs, Jul 31, City Base Cinema Screen B
click to enlarge Directed by Charles Evered A case of Murphy's law defines the day of Raymond Bilotti (Marty James), as he struggles to stay afloat in the face of foreclosure in this 19 minute short. "OUT" is the followup effort of director Charles Evered, whose previous work,  A Thousand Cuts, was nominated for a Saturn award in 2012. The Widowers 5pm Fri, August 1, City Base Cinema Screen B
click to enlarge 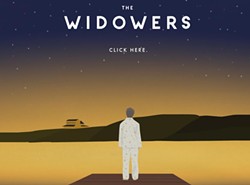 Directed by Jonathan Scott Chin Jonathan Scott Chin's The Widowers occupies a difficult space between comedy and drama, navigating this void with an impressive handle on both genres. A group of widowers—the depressed, the hopeful, the stoned, the quiet, the legally obligated—spend time at a grief counseling retreat run more like an arts and crafts camp. Trust exercises, anyone? When the film hits its stride, manipulating the inherently funny idea of a summer camp for grieving widows, the tense relationships that grow between characters are strange and beautiful things to see. Remake 9pm Fri, August 1, City Base Cinema Screen A
click to enlarge 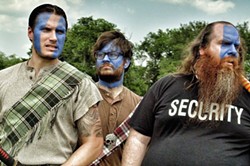 Directed by Rob Bruce Skiier and BASE jumper Shane McConkey helped redefine both sports in the '90s and early '00s, before his untimely death in Italy's Dolomite Mountains in 2009. This Red Bull doc takes a look at what made McConkey's stunning career shine in the world of extreme sports. You also get to see plenty of footage of McConkey doing frontflips and gainers off the sides of mountains, which is pretty tight. The Wisdom to Know the Difference 7pm Sun, August 3, City Base Cinema Screen A
click to enlarge

Directed by and starring Daniel Baldwin This Daniel Baldwin-directed, Baldwin-starring feature takes its name from the final line of the AA serenity prayer, a telling choice for an action-infused drama in which Baldwin tries to maintain his sobriety while helping a young girl find her own. Shot in and around SA, Daniel Baldwin will be in attendance. [Read: Daniel Baldwin's San Antonio Mission: TV, film and sobriety] "Dawn" 9pm Sunday, August 3, City Base Cinema Screen B
click to enlarge

Ya'ke Smith's "Dawn" Acclaimed San Antonio filmmaker Ya'ke Smith returns with "Dawn," a gritty take on the struggles of returning to life from a stint of incarceration. At the 2012 SXSW Film Festival, Smith debuted the powerful Wolf, a dramatic portrait of sexual abuse in SA. In 2007, Smith won an HBO Short Film Award for his work on "The Second Coming."