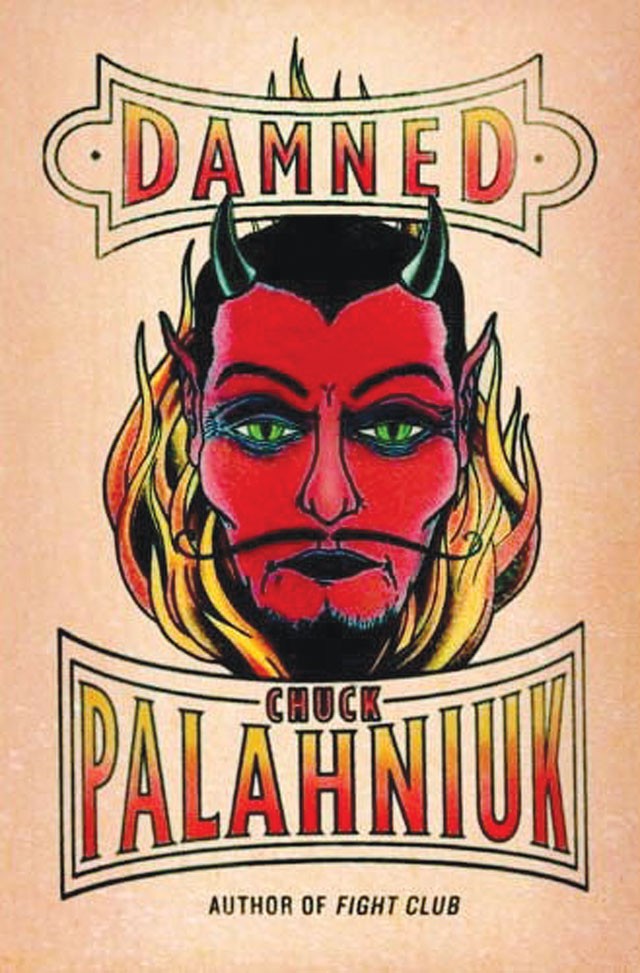 Hell, despite what Sartre, said about it being “other people,” is usually depicted as a lonely place, either the cascading trauma of lost relations in Clive Barker's The Hellbound Heart, or the clammy cochlea of torture tunnels in the those too-loud Pinhead movies inspired by his quite novella. Isolation is the everlasting imp, whether its Mickey Rourke going down that elevator in Angel Heart or Mimi Rogers fading to black as the only unsaved person on earth in The Rapture. But, as the 13-year-old narrator of Damned would like to inform a lonely old lady she connects with via her afterlife telephone-survey gig:  “Hell doesn't totally suck. Sure, you're menaced by demons and the landscape is rather appalling, but she'll meet new people.”

Chuck Palahniuk — who reimagined the Bosom of Abraham as a waiting room for social insurrection in Fight Club — has provided for his legions of fans a John Hughes meets John Waters version of the hot spot: a gummy-bear-littered Hades with internet access, where the English Patient is always on, and prom queens and outré artists alike try not to wade in an ocean of ejaculate. Everyone is in Hell, from Norman Mailer to Liberace, with maybe just St. Aquinas and Gandhi getting to sit on clouds with the harp. And our narrating outsider, Madison, who died from a marijuana overdose, is more than slightly pissed off at her parents — beautiful ex-hippie Hollywood types who own homes all over the world and gave her drugs for Christmas — for not telling her about God.

“As it turns out, the way-fundamentalist Christian creationists were correct. How I wish I could tell my parents: Everybody in Kansas was right. Yes, the inbred snake handlers and holy rollers had more on the ball than my secular humanist, billionaire mom and dad. The dark forces of evil really did plant those dinosaur bones and fake fossil records to mislead mankind. Evolution was hokum, and we all fell for it hook, line, and sinker.”

Enduring portraits of Hell, from Sartre's No Exit, which puts a philandering coward, a manipulative lesbian, and a reckless tease in the same room, or the eternal ironies represented  in that last panel of Hieronymus Bosch's Garden of Earthly Delights, instruct on morality while pointing out the hypocrisy of surrounding mores. Damned, which takes quick jabs at New Agers and Norman Mailer alike (book critics get it pretty hard as well) is too flip to be frightening, and not funny enough. As a parody of Alice Sebold's murdered-girl-in-heaven novel, The Lovely Bones, the book works. As an attempt at a literature that measures hypocrisy around the rules of some arbitrary abyss, Damned is the pits.