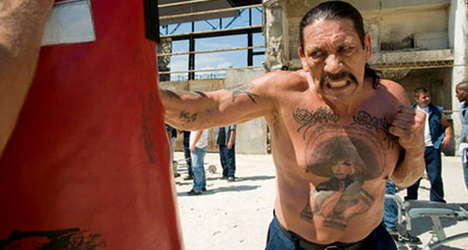 Coming off the first lead role of his career in Machete last year, actor Danny Trejo is as busy as always. Slated to star in about 15 films in 2011 according to imdb.com, Trejo’s most recent project is Death Race 2, a prequel to the violent 2008 action thriller remake about prisoners who participate in a brutal car race to win their freedom.

During an interview with me, Trejo, 66, talked about why people stay away from him when he's behind the wheel of one of his lowriders and who he hopes to hang out with when he shoots The Muppets movie this year.

Tell me about your character Goldberg in Death Race 2.

You know, it caught me by surprise when they told me they wanted me to play a character named Goldberg. I said, “Whaaaaat?!” (Laughs) Goldberg is a lead mechanic in the prison. He’s chingón when it comes to working on cars.

Are you pretty knowledgeable under the hood of a car in real life?

Yeah, on older cars, but I don’t mess with anything new. I got a ’36 Dodge I got all cherried-out, a ’52 Chevy pickup, and a ’76 Cadillac DeVille that I work on all the time. But they’re not really race cars, they’re lowriders.

So, are you more of a defensive or offensive driver?

Did any of the cars on the set of Death Race 2 catch your eye?

I loved all of them. You have to know, these cars weren’t made to carry the weight they had on them. They had a lot of steel and metal. It wasn’t like driving a regular car. It was like driving a tank. To make a turn, you had to start turning about five second before you would usually start turning. The stunt guys were amazing. They were doing about 80 mph in them. I did about 30 mph.

You’re known for your movies role, but recently you did an TV episode of Modern Family on ABC. What was that experience like?

Standing next to Sofia Vergara – damn! She’s beautiful. I had done a TV series with her before called Nights in Prosperity. She was a lot of fun.

You get to work with all the beautiful ladies. Sofia Vergara, Jessica Alba in Machete, and now Tanit Phoenix in Death Race 2.

Phoenix was worth the trip to Cape Town, South Africa (location where Death Race 2 was shot). She is just so warmhearted. She’s actually from Cape Town, so she showed me around. I got to see South Africa from somebody who really knows it. It was a blast.

Do you think she would make a good superheroine? Her name has come up in rumors to play Wonder Woman in the DC Comics movie.

Yeah, she’s got these long legs that can kick you in the face! She actually looks a little bit like Lynda Carter (the actress who played Wonder Woman in the original 1975 TV series). They’d be stupid if they don’t get her.

Who would win in a fight: Wonder Woman or Machete?

Wonder Woman because Machete would give up real quick. (Laughs) He’d be trying to make out with her.

What’s going on with The Muppets movie? Are you officially signed on for that?

Yeah, but I don’t know what they got me cast as yet. I just have to be the pretty face and show up. I want to be one of the old grouchy guys on the balcony (Statler and Waldorf).

Any other favorite Muppets?

Miss Piggy. I have a dog named Miss Piggy. I’m going to bring her to the set. She’s a little fat pit bull. She’s only 18 inches tall, but she weights about 90 lbs. She’s got more personality than anybody. We started to paint her nails, so now she puts her paw up.