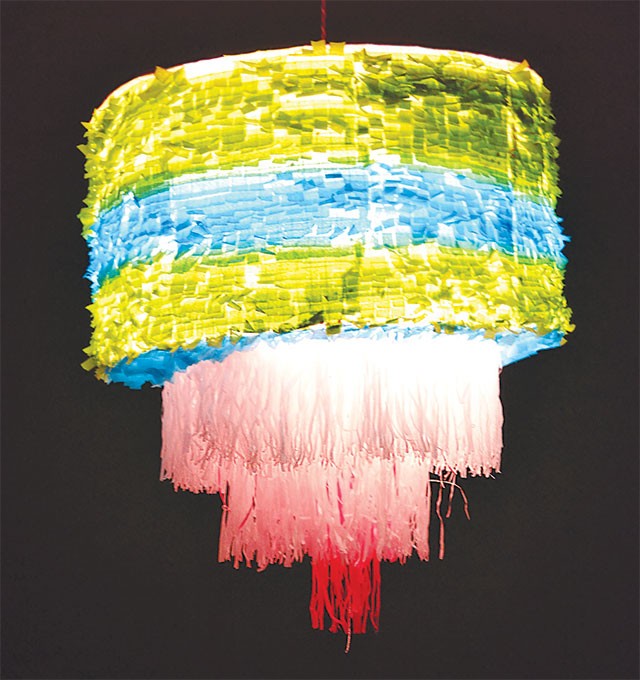 Maybe she was watching Bugs Bunny when the light bulb flicked on over curator Patty Ortiz’s head, but she had a bright idea nonetheless: Challenge five of the city’s leading contemporary artists to respond to the light from a single, lonely bulb. Shadowy, mysterious and provocative, “Alternate Currents” at the Museo Guadalupe is sparked by the cartoon metaphor of a light bulb blinking on over a character’s head to illustrate “insight, inspiration, creativity and the BIG IDEA.”

Usually so lyrical, restrained and elegant, Jesse Amado flashed on the idea of a modern lynching, suspending a light bulb from a thick-roped, rugged hangman’s noose. Blunt, confrontational and powerful, the noose’s rough, knotty texture and the dim, lantern-like lighting evoke nightmarish images of slave ships crossing the Atlantic and the repressive hate crimes committed against African Americans, though the noose has another chilling association—suicide. But the lengthy title, Again (an action that favors the strangulation of any idea that illuminates a public discussion of intolerance), makes clear Amado is primarily concerned about opposing the darkness of ignorance.

By contrast, Ken Little goes for an easy laugh with Panhandle. Using shoes, belts and horns, he’s configured a deer that appears frozen by the light. A single light casts bulbous shadows across the gallery floor, transforming the deer’s head into giant Mickey Mouse ears. This is where Bambi meets the road, and the results are rarely pretty, though you have to admire Little’s consummate craftsmanship.

Anita Valencia is so committed to her recycled materials that she can adapt them to any circumstance. Her butterflies made from cut-up aluminum cans flutter around a shining light bulb and form chains running down the cord to the floor where CD flowers bloom. Upbeat, nurturing and optimistic, Lotus Blossoms and Butterflies might be from the Garden of Eden after the machines have taken over.

Avi Avalos, the human piñata, has fashioned a luminous blue, green, pink and red piñata chandelier using pastel-colored tissue paper. Diffusing the light of the single bulb, the candy-colored chandelier glows warmly, floating in the darkness like an alien life form or some deep-sea creature lit by phosphorescence.

In the most personal installation, Karen Mahaffy recreates the shadows that slip through her living room when a car passes by late at night. Using the light bulb like a projector, she has created a miniature architectural model with windows covered with venetian blinds and a porch trellis that casts giant shadows on the wall as the piece spins around on a turntable. She also uses a snippet from the first album she purchased, the beginning of “Hell’s Bells” from AC/DC’s Back in Black; though Mahaffy, gentle soul that she is, is perhaps the last person you would expect to be into AC/DC.

At the entrance to “Alternate Currents,” a video shows various people, a light bulb burning over each individual’s head, talking about their big ideas. A chalkboard also has been provided where visitors can scribble their grand notions in chalk. Will it save the world? Maybe not, but Ortiz’s electrified idea powers an energizing exhibit.