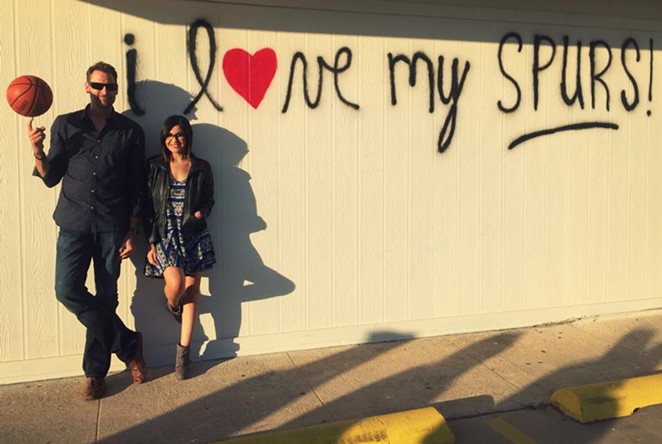 Luis Muñoz
No, Brent Barry is not sticking around to take selfies with you.
Local producer/director Luis Muñoz is at it again.

The man responsible for making Austin's "I Love You So Much" wall about 10 times better (or worse depending on where you stand on original art and what not) last December penned an ode to the Silver and Black.

Unveiling the new street art via Facebook this afternoon, Muñoz shared another charitable aspect to this campaign.

Race for Seis anyone? A lot of people said my other wall should've said "SPURS" instead of Tacos so here you go! Thanks to my friend and music producer, Polygrafic, we will donate $1 to CASA [Child Advocates of San Antonio] and for every pic taken and posted on Instagram with the hash-tag ‪#‎iLoveMySpurs‬ over the next week. Thanks to Brent Barry and Nina Duran for the first shot! (At Richter Goods store On 2202 Broadway next to Carmelita's.)


And it's just in time for the Spurs' return from their annual rodeo road trip. It's time to dust off those team jerseys. Let's just hope City of San Antonio employees don't confuse this for graffiti.