Despite global recognition and an exhibition history dotted with A-list curators and contemporary art stars, the International Artist-in-Residence program late Linda Pace launched with the opening of Artpace back in 1995 retains a certain air of mystery. While the parameters of the program (which annually invites three guest curators to each select a trio of artists — one from Texas, one from elsewhere in the U.S. and one from  abroad — to “live and create art in San Antonio for two months”) are fairly well-known, IAIR exhibition specifics have rarely been teased out in a concrete fashion — meaning that opening receptions often promise a fairly dramatic reveal.

Beyond pondering how resident artists use their stipends, fabricate their work and spend their leisure time, the biggest question mark has always hung over what their locally created projects might entail. As a writer who’s almost always had to refer to the previous — and frequently unrelated — projects of Artpace residents as a means to preview their local exhibitions, it came as a surprise last year when the San Antonio institution first opened its studios to give the public “a behind-the-scenes look into the artists’ process mid-way through their residency.”

Packing a one-two punch as curator of both the curiously titled group show “Did You Ever See Such a Thing as a Drawing of a Muchness?” (on view in the Hudson Showroom through April 30) and the Spring 2017 edition of IAIR, Wisconsin-born Michelle Grabner brought together the trio of Robert Hodge (Houston), Nicholas Frank (Milwaukee) and Kate Newby (New Zealand). An eclectic yet entirely approachable crew bound by thoughtful methods and conceptual sensibilities, Hodge, Frank and Newby spent this past Valentine’s Day welcoming visitors and answering questions about their forthcoming exhibitions, which open to the public on March 16. 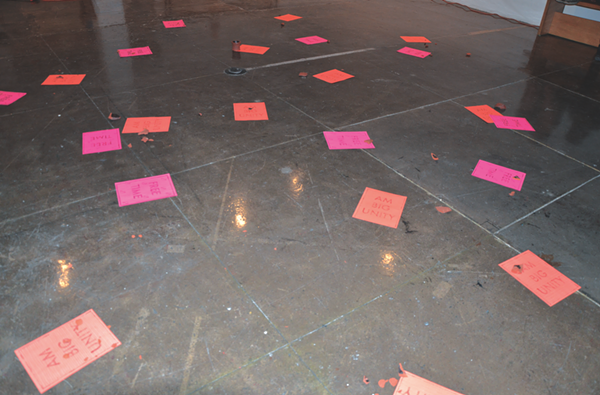 Work by Nicholas Frank
“There’s a lot going on in my mind,” Nicholas Frank admitted while clinking together links in a short stretch of transparent glass chain he created in collaboration with San Antonio glass master Jake Zollie Harper. Once completed, Frank’s unusually breakable chain will suggest boundaries within his exhibition space while challenging preconceived notions of a device associated with both restraint and teamwork. Quirky and bespectacled, the Milwaukee-based artist/writer/curator touched on connotations and dichotomies presented by his work in progress. “Chains can be something that link us together, or can be an instrument of bondage — containment, something that keeps us down,” he said. “I like that duality … I like that idea of the weakest link … if we’re all strong — that’s the key.” Scattered across the floor of his studio, neon-colored flyers shout out peculiar messages like “Am Big Unity” and “Free Time.” After describing them as “ambiguous propaganda posters,” Frank mentioned a social theorist who believes time “enslaves us” and perhaps keeps us from truly living in the moment. “I like that idea,” he said. “So I made a protest poster to ‘Free Time.’”

Work by Robert Hodge
Occupying the adjoining studio, Robert Hodge is an interdisciplinary artist whose projects — such as the album Two and 1⁄2 years: A Musical Celebration to the Spirit of Juneteenth — often deal with themes of “memory and commemoration.” Evidenced by a record player in the corner flanked by David Bowie, Michael Jackson and 2Pac albums, music plays a significant role in Hodge’s creative process as well as his Artpace residency. While visitors quizzed him about the materials visible in his studio — namely advertising posters torn apart and reassembled in compositions attached to canvases — it quickly became clear that the biggest puzzle pieces hasn’t arrived yet. Researching San Antonio history in preparation for the residency, Hodge came across stories of the recordings blues legend Robert Johnson made at the Gunter Hotel circa 1936. “So I went to the same hotel and made a record in the same room,” he explained. “It’s more of a hip-hop, soul kind of record but it’s all from that Delta blues that Robert Johnson made here 80 years ago.” Although it apparently didn’t influence the album — which features musicians from Houston, New Orleans and San Antonio and will be available for purchase from Artpace in vinyl format — a certain myth surrounding Johnson found its way into Hodge’s research. “Supposedly Robert Johnson sold his soul to the devil for guitar skills,” he said. “So these [ideas] evolved like … Can you sell your soul? What does that feel like? I’ve been reading books, getting deeper into it … the wormhole goes deep. If you get on YouTube and watch some shit, you’ll be up for hours. I don’t know what to believe anymore.” Less cryptic but amusing nonetheless is the story behind the many posters rolled up on tables and fragmented across the floor. “I used to actually go around [Houston] and pull ‘em,” he admitted. Then he met the guy whose job it was to paste them up in the first place. “We were bumping heads because I was essentially tearing down his work,” Hodge said. “I was looking for him and he was looking for me.” Since meeting and making peace, the two have come to an arrangement that involves Hodge getting his art supplies directly from the source.

Work by Kate Newby
In Kate Newby’s studio space upstairs, reference images of flora and fauna are attached to the wall and tables are filled with objects and supplies that conjure an odd cross between a science experiment and an archeological dig. On the floor, a blue wooden surface functions as a backdrop for an array of organic-looking ceramic pieces. Some look like glossy river rocks and ladybugs, others resemble fish fins or fossils — and all seem to be prototypes for elements and techniques that might factor into Newby’s exhibition. “When you work with clay, you always work in a specific scale, and you might want to expand that to be more environmental,” she said. “So this is a test to see if I could possibly do it on a larger scale … I’ve done a lot of stuff with clay … I’ve been looking at digging it and pit-firing it and barrel-firing it. But it’s not going to be ‘my work,’ it’s going to be the fact that I wanted experiences over making final works.” Fitting for a curious collection of objects one might collect on a surreal hike, Newby ponders presenting her new works outside the confines of the gallery. “I have this idea that what I want to do — and this is why barrel-firing is really interesting — is literally taking the atmosphere and putting it into the work,” she said. “And I like this idea that the more I absorb, the more that might come through on the work … I really want to use the rooftop for my exhibition … It could possibly respond to rainstorms and wind and sun and weather.”