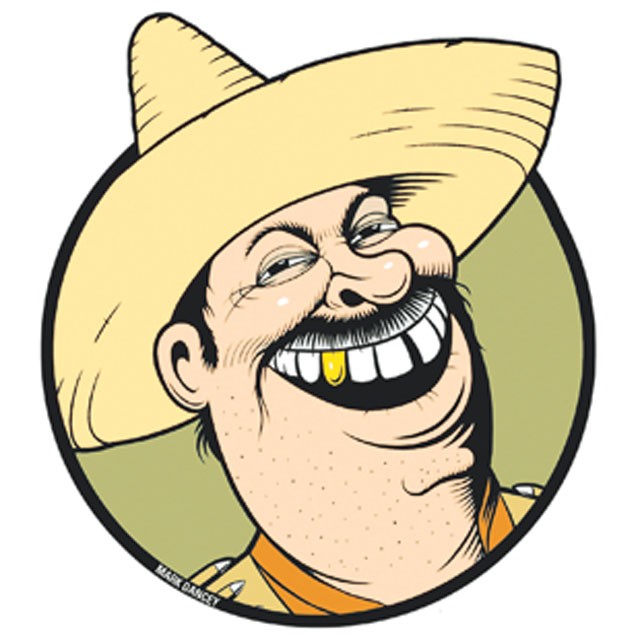 Dear Mexican: These days, using the word "nigger" is considered so offensive that, in its place, we now use the term "n-word." Of course, never mind that African-Americans use it amongst themselves as a term of endearment, pero esa es una historia para un otro dia. Sin embargo, it raises a pregunta for me: Por que no one uses "b-word" for "beaner," "w-word" for "wetback," and "s-word" for "spick"?
While I don't advocate the use of ANY ethnic slur, I find it curious/interesting, that similar "abbreviations" (like n-word) don't exist for those used to refer to Mexicans, and I'd like to know your take on this (of course I'll admit that those "abbreviations" may exist, and I haven't heard about them yet).
— PC, but not a Pendejo

Dear Gabacho: The three anti-Mexi slurs you used are so 1950s — the only people who use those words nowadays are old gabachos and Alabamans. No need to ameliorate those, anymore so than mick, dago, chink, Mohammedan, or square head. Besides, you forgot the most important abbreviated euphemism right now: the I-word, for "illegal" when referring to undocumented people. A campaign run by the always-chingón Applied Research Center (publishers of the even-more-chingón magazine, Colorlines) is seeking that everyone stop using the term "illegal" outright, or at the least resort to using the awkward I-word stand-in. The only people who use that term, unfortunately, are Aztlanistas of all ethnicities, while the n-word term has become part of mainstream culture (it's first appearance in the mainstream media, by the way, dates back to a 1987 St. Petersburg Time article, while the term seems to date back to PC pendejos in charge of HR relations for the government during the early 1980s).

What's the difference, then, between the public's reticent acceptance of using the n-word for nigger while completely ignoring the I-word campaign? Easy: one term has centuries of nasty history behind it involving slavery, race, lynching and all other sorts of nastiness, while illegal as a stand-in for "Mexican" only dates back to the 1950s — the earliest reference I could find to illegals being used as a noun to refer to undocumented Mexicans is a 1951 Los Angeles Times story quoting a government official about the Mexican waves then invading California. Before that, America actually cheered on "illegals" invading a sovereign land: the Jews who tried to illegally enter the British Mandate for Palestine before the establishment of Israel were called "illegals" by the press, and there was even a 1948 documentary called The Illegals based on the subject. Of course, that's ancient history for Americans, who never liked to be reminded of their double standards, especially when it involves Mexicans. Besides, America always needs ethnic slurs to toss around and make itself feel better—and while the era of nigger is largely over, the days of illegal are just beginning. Go us!

As a Korean-American daughter of an illegal-immigrant (Mexican) employer, I'm very curious as to know what Mexicans think of us. (I have a feeling that the answer is going to be less than shining.)
— Hangul Heina

Dear Chinita: We have no real beef with Koreans, other than you stole our tacos.

GOOD MEXICAN OF THE WEEK! The "Drop the I-Word" campaign, of course. The Mexican doesn't have a problem with using illegal — reappropriation, cabrones! — but I do support the ARC's campaign, because they're righteous broders who do good work. Visit droptheiword.com for more information.