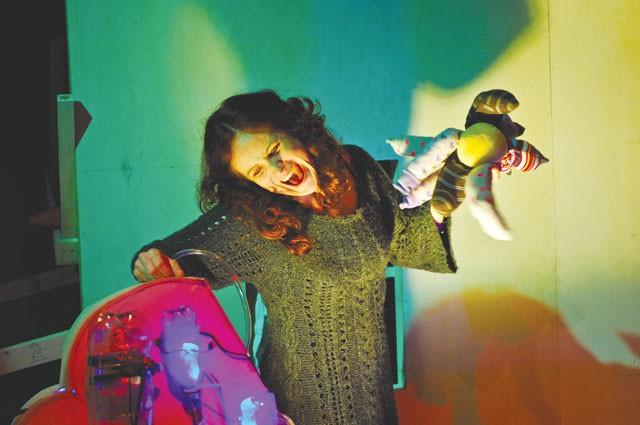 Statistics inhabit a world of fractions, probabilities expressed in numbers running to the right of a decimal point, while the land of the living is simply binary. 1, you exist; 0, you don’t. Or so it seems to Nick*, an analyst for the Census Bureau, until his wife gives birth to a smudge, a mutant sack of skin that seems only partially human. Rachel Axler’s obsidian-black comedy Smudge, which opened last Thursday at the Attic Theatre, treats a dark, domestic fear with the unexpected thrust of snappy repartee parried with buffo visual humor, pushing the story through long moments of farce into the chill waters of surrealist nightmare.

Directed by Roberto Prestigiacomo, with SA newcomer Ross Everett Olsaver as Nick and Trinity stalwart Susanna Morrow as his wife, the action begins stiffly, then builds to laugh-filled caricature when Nick’s* brother, broadly played by Brad Milne, enters. But it is Morrow who holds the stage, using her dancer’s skills to fly about (and occasionally dance through) the set, her faultless timing no doubt enhanced by her experience in many Shakespeare festivals. The set, by New York sculptor Jade Townsend is a thing of wonder, in large part repurposed from his installation An Allegory of Taste, which appeared earlier this year in the exhibition “New Image Sculpture” at the McNay. Stacks of monster wooden furniture line the back of the stage, adding to the queasy dreamlike feeling that builds until it breaks into the truly terrifying — a startling resolution played in realist fashion by Olsaver and Morrow.

Axler, a two-time Emmy Award winner, is a former writer for The Daily Show with Jon Stewart. Her play, Archaeology, premiered at The Kitchen Theatre in 2009. Other plays of hers have appeared at the Manhattan Theatre Club, The Playwrights Foundation, and the Eugene O’Neill National Playwrights Conference. Smudge debuted last year off Broadway at the Women’s Project.•

*I misidentified Morrow and Olsaver's characters in the original copy, something Thomas Jenkins, our regular theater reviewer, would not have botched up. My sincere apologies to all. — Scott Andrews