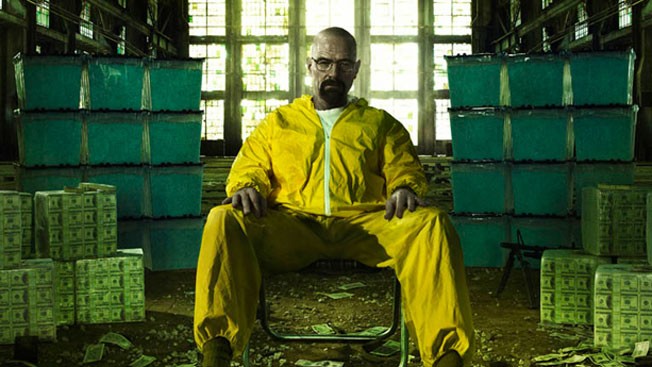 1. This hilarious, no bullshit "Honest Trailer" for Breaking Bad is a must watch. Why? So you know what you're really getting yourself into when you sit down to watch Vince Gilligan's masterpiece at the behest of everyone you've ever met. Also excellent for die hard fans that'll find themselves being all "TOTALLY! YES! SO TRUE. THEY DO EAT BREAKFAST ALL THE TIME."

2. In case you didn't know, Molotov's "Apocalypshit" was featured on the Breaking Bad pilot back in the day and is still considered a series soundtrack favorite among fans. Listen to the special edit made specially for Walter 'Tighty-Whitey' White's escapades.

VIDEO - Molotov at The Korova

Molotov Cocktail Party at the Korova

3. This sketch from  the 2011 Primetime Emmys features Jesse 'Yo Bitch' Pinkman selling some of the blue shit to The Office's resident creep Creed. Perfect.

5. I'm going to go ahead and say that the best thing to come of Youtube's 'Geek Week' 2k13 was this very special adaptation of Breaking Bad for middle schoolers. My favorite part happens around 2:11. (If you've never heard of Rhett and Link, you should definitely check out their IFC show, Commercial Kings.)

7. Some angelic soul re-imagined Breaking Bad as a 1990s sitcom and I couldn't be more grateful.

8. Jim Rash (The Descendants, Community) hosts the Sundance Channel's Writer's Room, a series that delves into the–you guessed it–writer's rooms at beloved television shows. The Breaking Bad episode is particularly wonderful. There's some neat reminiscing about how the show came to be, what the process is like plot development-wise, and a big fat reveal about how the series will end. Just kidding.

10. For those of you who haven't been re-watching the entire series for the past month in anticipation of tonight's premiere (guilty!), here's this handy dandy 9-minute refresher.

11. "Ozymandias," As Read by Bryan Cranston. A seriously foreboding trailer, ladies and gents. Have fun analyzing that one.

13. "Breaking Bad Beggar," by UCB improv troupe Beige. Bryan Cranston himself is a fan of this bit, and tweeted it out to his followers this weekend.