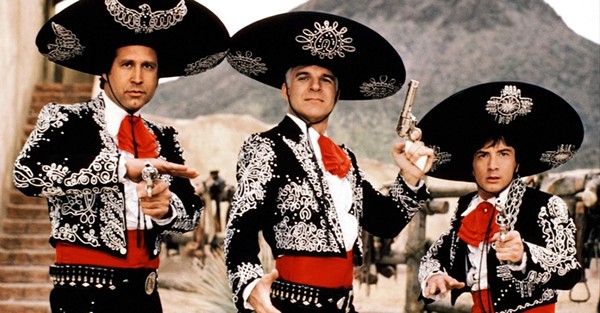 Orion Pictures
We’re not really sure where the 1986 comedy ¡Three Amigos! would fall in the debate on cultural appropriation in today’s world (Latinx would likely be upset if they saw three gringos wearing mariachi gear and throwing gritos at, say, La Villita on Cinco de Mayo or at a Mexican-themed frat party), but the classic movie hasn’t felt much backlash in the last 30 years like other non-PC movies from the ’80s – Short Circuit, Soul Man, Sixteen Candles – so it’ll probably be just fine.

In ¡Three Amigos!, comedians Steve Martin, Chevy Chase and Martin Short star as Lucky Day, Dusty Bottoms and Ned Nederlander, a trio of silent film stars from Hollywood who are accidentally mistaken for real-life heroes and brought to the small Mexican village of Santo Poco where they are expected to defend the townspeople from a gang of outlaws led by the infamous (“In-famous is when you’re more than famous”) El Guapo. The film is screening as part of Slab Cinema’s ongoing free outdoor movies series. A plethora of piñatas or 100,000 pesos to any couple who can imitate Lucky and Ned’s cantina dance to “My Little Buttercup” during the show.