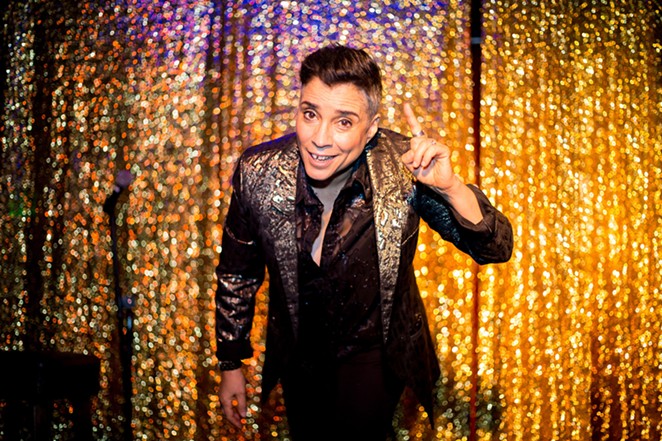 Fabian Echevarria
Comedian Marga Gomez has pivoted from stand-up to "the theatah." In late September, she'll bring her latest project, the one-woman autobiographical show Latin Standards, to the Esperanza Peace and Justice Center for a three-day engagement.

A veteran of the comedy scene, Gomez first made a name for herself in the ‘80s as one of the first openly lesbian performers in the nation. She’s performed at international comedy festivals like SF Sketchfest and Montreal’s Just For Laughs and appeared on LOGO’s One Night Stand Up, Showtime’s Latino Laugh Fest and Comedy Central’s Out There. You may even recognize her from her roles in sci-fi hits Sphere and Sense8.

In Latin Standards, Gomez looks back to her childhood growing up in Manhattan’s Washington Heights with her father Willy Chevalier, a multifaceted performer who made a name for himself in the golden age of La Farándula variety shows. Throughout the show, she embodies a slate of characters ranging from denizens of 1960s Manhattan to current day San Francisco hipsters to “perform the loving, funny and true story of perseverance and creative addiction passed down from immigrant father to lesbian daughter.”

After its premiere off-Broadway at the Public Theater's 2017 Under the Radar Festival, Latin Standards was named a New York Times "Critic's Pick" for its "winning heart and humor." Since then, Gomez has taken the show on the road, performing in Chicago, Los Angeles, San Francisco and more.