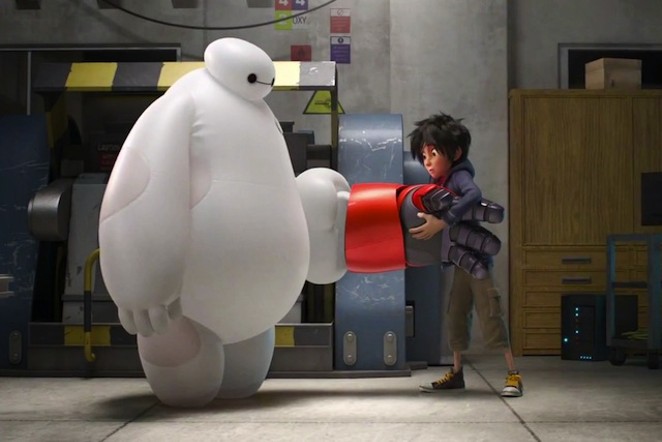 Courtesy
The premise of Big Hero 6 is familiar: In the near future, a teenager must overcome tremendous personal loss to, with the help of newfound friends, defeat the villain who wants to destroy society. This is Disney Animation’s version of the highly profitable young adult, comic book and action genres merged into one, and the result is superb.


Inspired and seeking admission to the university, Hiro learns from Professor Callaghan (James Cromwell) of an upcoming student showcase in which the first place winner earns enrollment. Hiro invents microbots—shape-shifting magnets that create whatever the mind desires—and wins. Then an explosion throws his life for a loop, forcing him and his brother’s friends to find new ways to combat evil.

Directors Don Hall and Chris Williams tell a brisk story with bright, clear animation that pops in 3D. Better, the action scenes are imaginative and dynamic, and use each character’s skill to great effect. The voice work is sufficient overall, but Adsit (best known as Pete Hornberger on 30 Rock) deserves mention for bringing humor and humanity to Baymax, an otherwise one-dimensional robot that looks like the Stay Puft Marshmallow Man. Adsit makes the character appealing for children and adults alike: In one scene Baymax runs low on battery, which means it rather drunkenly stumbles back home—slurred speech and all—and Hiro has to sneak Baymax into the house or they’ll both get in trouble. It’s a cute moment handled perfectly.

The flaws are minor but noticeable: Predictable story, weak motive for the villain, and anyone who knows anything about the ensemble will know who the bad guy is based on casting alone. As for the title, it’s terrible. The fact that this is based on a Marvel Comics series of the same name doesn’t forgive the title’s lameness —it clearly should’ve been changed to something more catchy and descriptive.

From a box office standpoint this should be a huge hit, especially after the Disney marketing machine kicks into high gear and tells everyone how good it is. More importantly, Big Hero 6 is a success because it works on two levels: Animation aficionados will enjoy it as homage to Japanime, while others will embrace the strong family values, humor and action. As is often the case with anything with the name “Disney” attached to it, this one’s a winner.