Failure Is Not an Option: George Lopez returns to SA 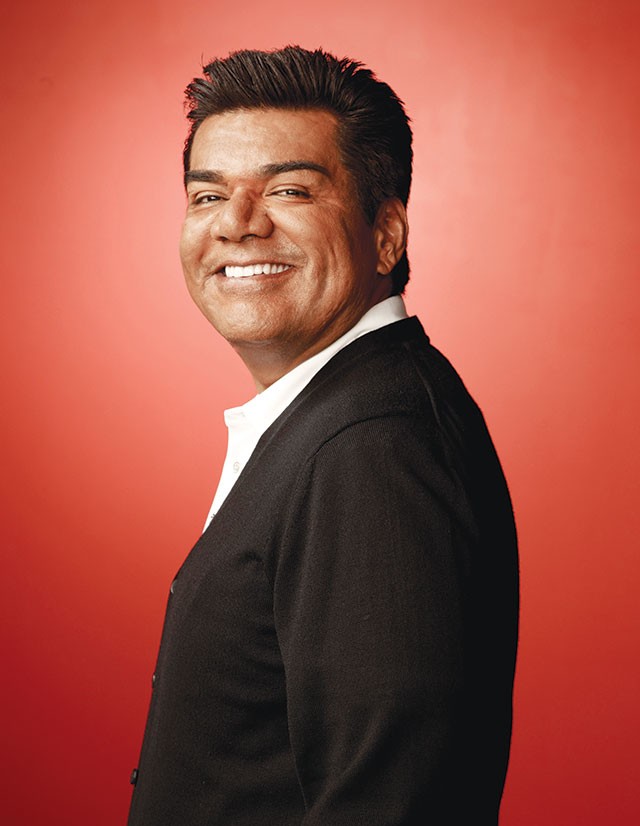 It is evident comedian George Lopez is still a little sensitive about the on-again, off-again relationship he’s had with television. Whatever the issue, the Current pushed some buttons when we talked to him last week in anticipation of this weekend’s tour stop in San Antonio. We managed, however, to draw him back in for the homestretch.

What is it about San Antonio that makes you come back time and time again?

Well, San Antonio has great people. It’s a great city. It’s historical. I’ve been coming through San Antonio for a long time. I did my HBO special there at the AT&T Center (Tall, Dark & Chicano in 2009). The Majestic is a great place to work, so I always try to come back every year.

There always seems to be a place for you in the TV landscape, but your last three shows (George Lopez, Lopez Tonight and Saint George) were cancelled. Has the instability of the TV industry taken a toll on you in any way?

What does that mean—my last three shows?

Well, George Lopez was cancelled in 2007 and then Lopez Tonight…

Wait a minute, wait a minute. Every show ends, OK. George Lopez went 120 episodes and it went into syndication. It hasn’t been off the air since 2002. I wouldn’t necessarily call that show a failure. It’s the opposite. It is still on the air. It is the only show in the history of TV with a Mexican American lead that has been syndicated. It’s a little bit of an insult to look at that as a failure.

I didn’t call it a failure. I said it was cancelled.

It got cancelled because all shows get cancelled. Seinfeld got cancelled. (Editor’s note: Seinfeld did not get cancelled). [Shows] end. You look at M*A*S*H, one of the greatest shows. It ended. The fact that George Lopez got to 120 episodes should be celebrated not looked at as a failure. And Lopez Tonight went two years. [The] Chevy Chase [Show] went one month. [The] Arsenio [Hall Show] (the revival in 2013) went one year. Instead of looking at it in a negative way, maybe look at it like I paved the way for other shows to be on TV. How about without George Lopez, you don’t have three shows on the air that have employed actors and put people to work. And Saint George was a 10-90 (a network contract where a TV show will get picked up for an additional 90 episodes if the first 10 hit certain ratings; Saint George did not) and it went all 10 episodes. It didn’t get picked up, but I don’t look at that as a negative. You try something and if it works, it works. And if it doesn’t work, it’s not a failure. It’s a failure if you don’t try.

Do you think 10 episodes was enough time to see if Saint George could find some traction?

I don’t think 10 is a good enough amount and the [ratings] number was so high to reach. Those were all good shows. I don’t look at my career as a failure in any way. I’ve done things that no one else has done. I’ve got a star on the [Hollywood] Walk of Fame. I’ve got a wax figure (at Madame Tussaud’s Wax Museum in Hollywood). I’ve performed all over the world and in front of presidents. I don’t look at my career as anything other than a success.

Since the way people watch TV has changed so much in the last few years, do you think something like the Nielsen Ratings system is a fair way to measure how many people are watching a specific show at a certain time?

That system was created in the ’50s and has never been equal to the people who are watching TV. The diversity of viewers and the people who have the [Nielsen] boxes are underrepresented. We used to talk about that when [George Lopez] was on 10 years ago. The people that were watching it didn’t represent the country. Also, if you want a show to succeed, you’re going to have to have a certain amount of people watch who are non-black and non-Latino. Sixty-five percent of the people who watched [George Lopez] were white. If you can’t cross over, you don’t belong on TV. That’s not just me saying it. That’s just the way it is.

You recently wished comedian Cristela Alonzo good luck via Twitter on her new ABC sitcom Cristela. Having worked on that network in the past and because you are both Latino, is there anything else you want to tell her that she might not know yet?

I would wish her success. I wouldn’t know what to tell her because I don’t know what’s around her. I would say, in general, to anybody, that whatever decisions you make, let them be your decisions and not somebody telling you what to say. I’m saying that to everybody, not just to her. Ultimately, you have to live and die with your decisions. If it succeeds, you can say, “Wow, I made the right choices.” If it doesn’t succeed, you can say, “At least I did it the way I wanted to do it.”

These days everyone is always apologizing for something they say that offends somebody else. But you always seem to express yourself and are not afraid to say when someone pisses you off. From a professional standpoint, do you ever worry about burning bridges? I mean, you never know when you’re going to cross paths with someone again.

I try not to [burn bridges], but if I need to speak up for myself then I do. I really don’t think there is one person in the business that can make it hard for you to succeed. Some people ask, “Is he good to work with or not?” My reputation has always been that I’m someone good to work with. I’m sure there are some people that don’t like me, but there’s probably a reason they don’t like me. I’ve fired some people for not doing a job correctly—the way I wanted them to do it—so I’m sure those people wouldn’t be happy. But in whatever I do, I try to make sure that people are comfortable with the work.

On The Howard Stern Show earlier this year, you said there was a “camaraderie between Latinos that wasn’t there 20 years ago” in Hollywood. I can believe that, but I would’ve also assumed there is still some competition between Latinos, too. I mean, if someone like comedian Gabriel Iglesias was tapped for a gig, would you wonder why you weren’t called instead?

You know, I don’t really know Gabriel that well. We’ve been around each other, but I don’t see him. He’s doing great. I have no ill feelings toward him and wish him success. I don’t have to prove myself to anybody. I’m happy with what I’ve done. If you like [Gabriel], go see him. If you like me, come see me. If you like Felipe Esparza, who is also great, go see him. We can’t be narrow-minded and think that we all get along or we all know each other, but the ones that do know each other tend to be very friendly with each other. That is what I was saying wasn’t around 20 years ago.

When you were doing press for Saint George earlier this year, you opened up about your drinking habit and said you had been sober for a couple of months. Are you still sober?

That’s interesting because around the same time you mentioned you were sober, news came out that you signed on as a spokesperson for the tequila company AsomBroso. I’m being facetious, but how do you know the tequila is any good if you can’t even try it?

Well, I drank it before [I was sober], so I know that it’s good. Listen, I’m telling you to buy it. I’ll sign the bottle, but I won’t take part in what’s inside. Also, I drank for a long time and never had a good relationship with alcohol, which I’m sure a lot of people, including Latinos, have. At some point you have to address that. My life is probably a little bit easier without that in it.

Since Day of the Dead is coming up, what would you put on your own altar to enjoy in the afterlife?

I’d put a cigar. I’d put a golf ball. I might put some Tajín (brand of chili seasoning) on there. I’d put some hair gel because wherever I go I’d hate to be without my gel. Then I’d probably put a bottle of tequila because if I’m going to another world, I’m drinking in the other world. I won’t drink in this one, but I’ll drink in the other one.