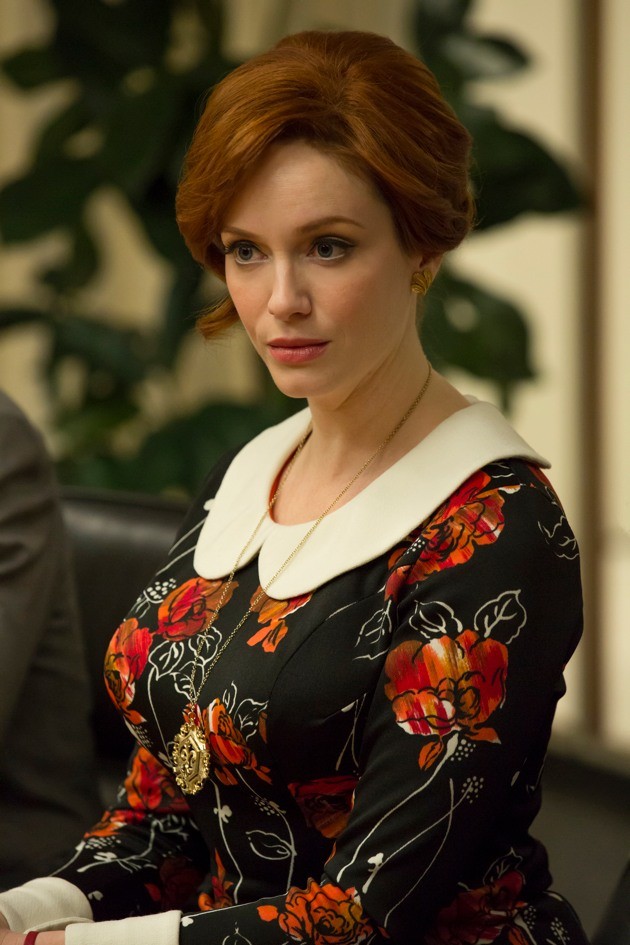 Et tu, Joanie? Don's back at the office, but with "Stipulations"

“Call a cab. Get on a plane. Go home. I don't want you to worry about me anymore. This is the way it ends. It's going to be so much easier for both of us.” These lines, uttered by Megan Draper a third of the way into “Field Trip,” are the most powerful in the Don/Megan storyline thus far this season. Deflated and exhausted at the prospect of possibly not being an immediate runaway success in Hollywood, Megan is thrilled when she thinks (albeit briefly) that Don actually came because he needed her.

The lights seem to go out for her as she finds out he came to 'manage' her after being called by her talent agent and informed of some recent acts of desperation (she interrupted a lunch meeting between a potential director and Rod Serling to tearfully demand a re-read!). To top it off, as Don finally confesses that he's been on leave from SC&P, Megan comes to the crushing realization that there wasn't really anything stopping him from being with her in California this whole time. It is clear that this is not a truly final moment between the two (they later have a very unsatisfying half-reconciliation over the phone), but nonetheless, it puts us on notice that Megan's noticed Don's ultimate distance and selfish disinterest.

While things seem headed for implosion with Megan, Don takes two other meaningful field trips. The first is a seemingly promising meeting with a rival of SC&P. The two men courting Don are quite thrilled with what they are prepared to offer him (we never find out exactly) and at the prospect of working with a genius in their field. But Roger Sterling has other designs. Intervening by way of a beautiful young lady (how else!?), Roger lures Don to a hotel room and, after Don hilariously refers to Roger as Judas for his involvement in Don's mandatory leave, the two agree that Don will come back to work on Monday.

Good ol' Don simply takes Roger's word for it and shows up. This second field trip, one that should be more like a homecoming, ends up as a surreal and bizarre affair that feels every bit like an episode of The Twilight Zone (maybe that's why Rod Serling is name-dropped). Don seems an alien to the office that was once his domain, and through some fine acting by the always impeccable Jon Hamm, we can really see it on his face. After discovering that Roger didn't even discuss his reinstatement with anyone, Don spends an awkward day in limbo, remaining in the office out of sheer stubbornness. Peggy even tells Don at one point, "I can't say that we miss you."

At the end of the day, after a shrewd speech by Roger reminding everyone that Draper is a partner and that he will be quite expensive to fire, the partners finally agree to bring Don back into the fold. But the offer is not without certain “stipulations.” Those stipulations, delivered in a scene where all of the present NY partners (including Joan) take a turn stabbing Don in the back, include: reporting to Lou Avery and moving to Layne's old office, no alone time with clients, no veering off the approved script in meetings, and no drinking at the office (unless business related). After a tense moment where we assume/kinda hope Don will tell them all to go to hell, he slyly and simply says "Ok." And the episode ends with Jimi Hendrix's "If 6 Was 9."

So why in the world does such a sought after man accept such confining terms? Perhaps it's Don's loyalty Roger that keeps him at SC&P. Perhaps it's his fear of the unknown. Perhaps it's a desire to prove himself anew to these people. Or perhaps he simply knows no other way than to keep pressing forward.

“This entire society, including its active, productive part – everyone – is running straight ahead, because they have lost the formula for stopping.” Jean Baudrillard, America

Meanwhile, Don's ex-wife Betty — along with their son Bobby, his teacher and classmates — takes a field trip of her own and makes her first appearance this season. When we first see Betty in "Field Trip," she's at lunch with a girlfriend (obviously a working professional now) trying to pretend that her caged life as a housewife and unfulfilled mom hasn't left her feeling empty. But we can tell it has. Almost as if she's trying to convince herself, she mutters something about how children are their own reward. But it's thinly-veiled bullshit, obviously.

Later, on a lark inspired by her own statements on the merits of kids, Betty goes on a field trip to a farm with Bobby's class. It is clear the whole time that she is out of place (like Don returning to SC&P), but she's determined to make the best of it. And it almost seems like she'll be successful, until Bobby trades her sandwich off at lunchtime for some gumdrops. Her irrational anger over this annoying but minor offense indicates her own petty and childish psychological state. The sandwich, for Betty, comes to represent all that she prepares for others but doesn't get to enjoy herself. The sandwich, after all, is Betty's promised yet unattained reward for her troubles in domestic life. So later, when Betty asks her husband Henry, "Why don't they love me?" — she's really asking, "Why isn't this enough?"

Be sure to check back next Monday for a recap of Season 7, Episode 4.