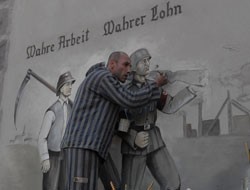 
To vanquish the enemy, follow the money. Because Allied money was bankrolling the planes, tanks, and ships that stood in the way of conquest, the Nazi régime conceived “Operation Bernhard,” an elaborate scheme to bankrupt the economies of Britain and the United States by flooding them with counterfeit currency. At the same time that they were implementing their master plan of genocide, the Nazis preserved and conscripted a few talented Jews — a breed despised for alleged avarice — to corrupt the pound sterling and the dollar. They almost succeeded.

“One adapts or dies,” insists Salomon
Sorowitsch (Markovics), determined to be a survivor. “Sally,” as he is known on the black market, is a cunning ferret who scorns his fellow Jews for refusing to adapt. At the outset of The Counterfeiters, Sally thrives by forging passports for those desperate to flee annihilation. He has just bedded a grateful client when the police barge in. “It is a great honor to arrest the world’s greatest counterfeiter,” announces Friedrich Herzog (Striesow), who leads the raid.

Sally spends years incarcerated as a common criminal. In 1939, he ends up in Sachsenhausen, a brutal camp where he expects to share the gruesome fate of other Jews. However, Herzog, now an official at the camp, welcomes Sally to Block 19, whose inmates enjoy such luxuries as clean sheets and edible food while outside their windows other prisoners are starved, beaten, and exterminated. Herzog has assembled a gifted assortment of printers, engravers, bankers, and artists, and he informs them that all he expects in exchange for their privileges is a bogus pound sterling so skillfully contrived that it can dupe experts at the Bank of England. Sally is assigned to direct the operation.

The men realize that their lives are being spared in exchange for a crucial contribution to the German war effort. One of the counterfeiters, a printer who was arrested while distributing anti-Nazi leaflets, balks. “The reason we’re printers is to print the truth,” Adolf Burger (Diehl) tells Sally, and he proceeds to sabotage their work, even after Herzog threatens to shoot five of them if they fail to meet his deadline for producing a credible dollar bill.

Is survival worth the price of aiding and abetting a heinous régime? Sally, whose guiding principle is adaptation over ideal, confronts another principle when tempted to betray Burger to Herzog and thereby save the counterfeiters’ lives: “One never squeals on one’s mates.” Are millions of Jews and others at risk from a Nazi victory not also mates worth moral consideration?

In The Counterfeiters, Austrian director Stefan Ruzowitzky evokes a tenebrous world in which everyone, including Herzog, who operates under pressure from Himmler but indicates that under other circumstances he might behave differently, is an opportunist. Based on a memoir by Burger, the screenplay offers a fresh take on the Holocaust. It thrusts us into a briar patch of conundrums whose thorns are shorn only by awareness that Burger is the only authentic major character and that other details are contrived to heighten ethical dilemmas. The Counterfeiters loses some, but by no means all, of its dramatic power by knowledge that it alters the historical record — that it, too, is a counterfeit. •