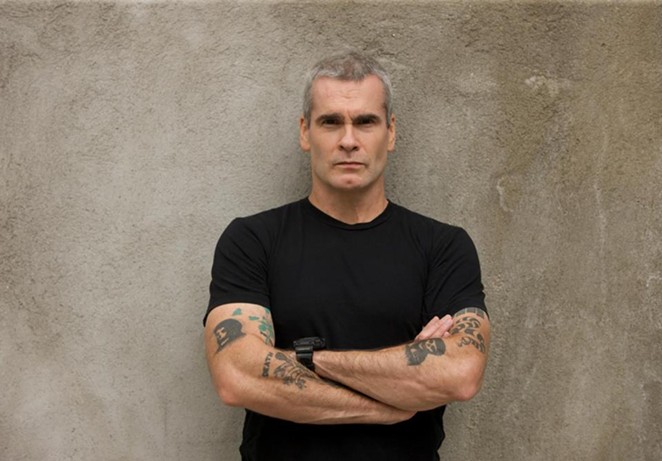 Facebook / Henry Rollins, Heidi May
Henry Rollins likes to talk, and that's what he'll be doing at the Tobin Center come next spring. Photo credit: Heidi May
One-time Black Flag frontman and present-day media personality Henry Rollins will bring his Good to See You 2022 speaking tour to San Antonio's Tobin Center on Tuesday, May 3.

Expect Rollins to "faithfully recount the events of his life in the brief pre-COVID period since the last tour and when things got even stranger over the last several months," according to the Tobin's promotional materials. Doesn't exactly sound like the kind of wild tour stories that populated his Get in the Van memoir, but OK.

Speaking engagements and readings have been part of Rollins' schtick since he joined the groundbreaking punk band Black Flag in the early '80s. In addition to his Rollins Band tours and releases, the shouter has released a slew of spoken-word albums and books, including the aforementioned tour diary.

Rollins' gift of gab has also landed him gigs hosting radio shows and cable TV programs as well as acting work, including a recurring role on Sons of Anarchy.

Tickets for the San Antonio show, which will take place in the Tobin's Carlos Alvarez Studio Theater, go on sale this Friday at 10 a.m. The highest-priced tickets include a meet-and-greet event. Just don't ask Uncle Hank to arm wrestle.