Free Will Astrology, Week of January 19 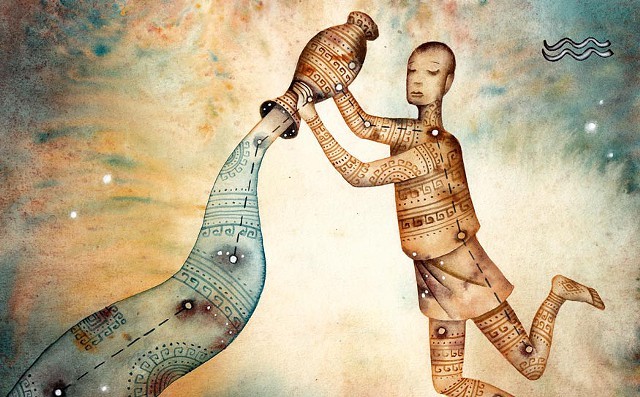 ARIES (March 21-April 19): Is there a patron saint of advertising or a goddess of marketing or a power animal that rules publicity and promotion? If so, I'm going to find out, then pray to them in your behalf. It's high time for your underappreciated talents and unsung accomplishments to receive more attention. And I am convinced that the astrological moment is ripe for just such a development. Help me out here, Aries. What can you do to get your message out better? What tricks do you have for attracting the interest of those who don't know yet about your wonders? Polish up your self-presentation, please.

TAURUS (April 20-May 20): During his 67 years of life, Taurus-born Leonardo da Vinci achieved excellence in 12 different fields, from painting to engineering to anatomy. Today he is regarded as among the most brilliant humans who ever lived. "His genius was so rare and universal that it can be said that nature worked a miracle on his behalf," said one observer. "He towered above all other artists through the strength and the nobility of his talents," said another. Yet on his death bed, Leonardo confessed, "I have offended God and mankind because my work did not reach the quality it should have." Typical for a Taurus, he underestimated himself! It's very important that you not do the same, especially in the coming weeks. The time has come for you to give yourself more of the credit and respect you deserve.

GEMINI (May 21-June 20): Where you have been and what you have done will be of little importance in the coming weeks. Both your mistakes and your triumphs will be irrelevant. In my estimation, you have a sacred duty to spy on the future and reconnoiter the pleasures and challenges that lie ahead. So I suggest you head off toward the frontier with an innocent gleam in your eye and a cheerful hunger for interesting surprises. How's your Wildness Quotient? If it's in a slump, pump it up.

CANCER (June 21-July 22): Will you ever find that treasured memento you misplaced? Is there any chance of reviving a dream you abandoned? You are in a phase when these events are more likely than usual to happen. The same is true about an opportunity that you frittered away or a missing link that you almost tracked down but ultimately failed to secure. If you will ever have any hope of getting another shot at those lost joys, it would be in the coming weeks. For best results, purge the regret and remorse you still feel about the mistakes you think you made once upon a time.

LEO (July 23-Aug. 22): In the early 1300s, the people of the Mexica tribe had no homeland. They had wandered for centuries through the northern parts of what we now call Mesoamerica. According to legend, that changed in 1323, when their priests received a vision of an eagle eating a snake while perched at the top of a prickly pear cactus. They declared that this was the location of the tribe's future power spot. Two years later, the prophecy was fulfilled. On an island in the middle of a lake, scouts spied the eagle, snake, and cactus. And that was where the tribe built the town of Tenochtitlan, which ultimately became the center of an empire. Today that place is called Mexico City. Have you had an equivalent vision, Leo? If you haven't yet, I bet you will soon. Go in search of it. Be alert.

VIRGO (Aug. 23-Sept. 22): By the end of the 16th century, nutmeg was in high demand throughout Europe. It was valued as a spice, medicine, and preservative. There was only one place in the world where it grew: on the Indonesian island of Run. The proto-capitalists of the Dutch East India Company gained dominion over Run, and enslaved the local population to work on plantations. They fully controlled the global sale of nutmeg, which allowed them to charge exorbitant prices. But ultimately their monopoly collapsed. Here's one reason why: Pigeons ate nutmeg seeds on Run, then flew to other islands and pooped them out, enabling plants to grow outside of Dutch jurisdiction. I see this story as an apt metaphor for you in the coming months, Virgo. What's your equivalent of the pigeons? Can you find unlikely allies to help you evade the controlling force that's limiting your options?

LIBRA (Sept. 23-Oct. 22): Have you triggered any brilliant breakthroughs lately? Have you made any cathartic departures from the way things have always been done? Have you thought so far outside the box that you can't even see the box any more? Probably not. The last few weeks have been a time of retrenchment and stabilization for you. But I bet you will start going creatively crazy very soon —and I mean that in the best sense. To ensure maximum health and well-being, you simply must authorize your imagination to leap and whirl and dazzle.

SCORPIO (Oct. 23-Nov. 21): The cassava plant produces a starchy root that's used as food by a half billion people all over the planet. No one can simply cook it up and eat it, though. In its raw state, it contains the poisonous chemical cyanide, which must be removed by careful preparation. An essential first step is to soak it in water for at least 18 hours. I see this process as a metaphor for the work you have ahead of you, Scorpio. A new source of psychological and spiritual sustenance will soon be available, but you will have to purge its toxins before you can use and enjoy it.

SAGITTARIUS (Nov. 22-Dec. 21): Italian composer Gioachino Rossini (1792-1868) didn't like to work hard, and yet he was also prolific. In fact, his desire to avoid strenuous exertion was an important factor in his abundant output. He got things done fast. His most famous opera, The Barber of Seville, took him just 13 days to finish. Another trick he relied on to reduce his workload was plagiarizing himself. He sometimes recycled passages from his earlier works for use in new compositions. Feeling good was another key element in his approach to discipline. If given a choice, he would tap into his creative energy while lounging in bed or hanging out with his buddies. In the coming weeks, Sagittarius, I recommend you consider strategies like his.

CAPRICORN (Dec. 22-Jan. 19): Each hour of every day, the sun offers us more energy than oil, gas, and coal can provide in an entire year. Sadly, much of our star's generous gift goes to waste. Our civilization isn't set up to take advantage of the bounty. Is there a comparable dynamic in your personal life, Capricorn? Are you missing out on a flow of raw power and blessings simply because you are ignorant of it or haven't made the necessary arrangements to gather it? If so, now would be an excellent time to change your ways.

AQUARIUS (Jan. 20-Feb. 18): According to my analysis of the long-term astrological omens, 2015 is the year you can get totally serious about doing what you were born to do. You will be given the chance to slough off all that's fake and irrelevant and delusory. You will be invited to fully embrace the central purpose of your destiny. If you're interested in taking up that challenge, I suggest you adopt Oscar Wilde's motto: "Nothing is serious except passion." Your primary duty is to associate primarily with people and places and situations that feed your deepest longings.

PISCES (Feb. 19-March 20): "Give up all hope for a better past," writes Emily Fragos in her poem "Art Brut." That's generally sound advice. But I think you may be able to find an exception to its truth in the coming weeks. As you work to forgive those who have trespassed against you, and as you revise your interpretations of bygone events, and as you untie knots that have weighed you down and slowed you up for a long time, you just may be able to create a better past. Dare to believe that you can transform the shape and feel of your memories.