Free Will Astrology, Week Of June 29 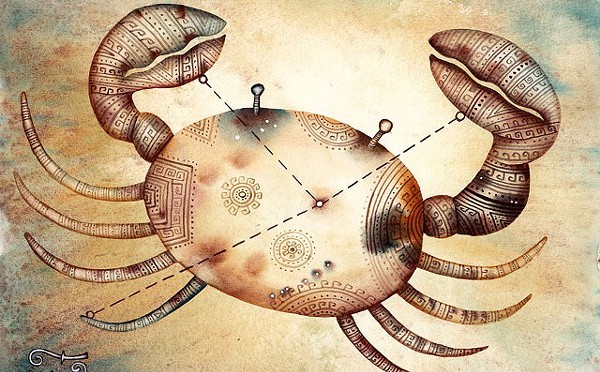 ARIES (March 21-April 19): To determine whether you are aligned with the cosmic flow, please answer the following questions. 1. Would you say that your current situation is more akin to treading water in a mosquito-ridden swamp, or conducting a ritual of purification in a clear mountain stream? 2. Have you been wrestling with boring ghosts and arguing with traditions that have lost most of their meaning? Or have you been transforming your past and developing a riper relationship with your roots? 3. Are you stuck in a gooey muck? Or are you building a flexible new foundation?

TAURUS (April 20-May 20): Taurus singer Sam Smith won four Grammys this year, largely on the strength of his hit single "Stay with Me." The song has a lush gospel choir backing up his lead vocals, or so it seems. But in fact, every voice in that choir is his own. He recorded twenty separate harmony tracks that were woven together to create the big sound. What would be the equivalent in your world, Taurus? How could you produce a wealth of support for yourself? What might you do to surround yourself with a web of help and nourishment? How can you amplify and intensify your efforts so they have more clout? Now would be an excellent time to explore possibilities like these.

GEMINI (May 21-June 20): Born under the sign of Gemini, Gustave Courbet (1819-1877) was a French painter who upset traditionalists. Unlike many of his contemporaries, he wasn't interested in creating idealistic art based on historical and religious themes. He focused on earthy subjects about which he had direct experience, like the day-to-day lives of peasants and laborers. So even though he became a highly praised celebrity by his mid-thirties, the arbiters of the art world tried to exclude him. For example, they denied him a place in Exposition Universelle, a major international exhibition in Paris. In response, Courbet built a temporary gallery next door to the main hall, where he displayed his own work. As you strive to get your voice heard, Gemini, I urge you to be equally cheeky and innovative. Buy yourself a megaphone or erect your own clubhouse or launch a new enterprise. Do whatever it takes to show who you really are.

CANCER (June 21-July 22): "I am trying to be unfamiliar with what I am doing," said composer John Cage in describing his creative process. That's excellent counsel for you to meditate on, Cancerian. The less expertise and certainty you have about the rough magic you're experimenting with, the more likely it is that this magic will lead you to useful breakthroughs. To bolster Cage's advice and help you get the most from your period of self-reinvention, I offer you this quote from Picasso: "I imitate everyone except myself."

LEO (July 23-Aug. 22): Your words of wisdom come from Leo artist Andy Warhol: "Sometimes people let the same problem make them miserable for years, when they could just say, 'so what.' That's one of my favorite things to say. 'So what.'" Can I interest you in that approach, Leo? It has similarities to the Buddhist strategy of cultivating non-attachment -- of dropping your fixations about matters that can't be controlled or changed. But I suspect you would draw special benefits from the breezy, devil-may-care spirit of Warhol's version. So start there.

VIRGO (Aug. 23-Sept. 22): In her late twenties, J. K. Rowling was a single mother living on welfare. That's when she began work on her Harry Potter books. Craig Newmark had turned 42 by the time he founded Craigslist. One of the world's most oft-visited websites is HuffingtonPost.com, which Arianna Huffington established when she was 54. As for Harland Sanders, creator of KFC: He didn't begin building the global empire of fried-chicken restaurants until the age of 65. I hope the preceding serves as a pep talk, Virgo, reminding you that it's never to late to instigate the project of a lifetime. The time between now and your birthday in 2016 will be an especially favorable phase to do so. Start ruminating on what it might be.

LIBRA (Sept. 23-Oct. 22): It's the power-building phase of your astrological cycle. To take maximum advantage, convey the following message to your subconscious mind: "I know you will provide me with an abundance of insight, inspiration, and energy for whatever intention I choose to focus on. And during the next four weeks, my intention will be to cultivate, expand, and refine my personal power. I will especially focus on what author Stephen R. Covey called 'the capacity to overcome deeply embedded habits and to cultivate higher, more effective ones.'"

SCORPIO (Oct. 23-Nov. 21): I'm a big fan of science and logic and objective thinking. Most of us need more of that good stuff. The world would be a saner, safer place if we all got regular lessons on how to be more reasonable and rational. But in the immediate future, Scorpio, I'll steer you in a different direction. I believe you will benefit from injecting your imagination with primal raw crazy wild mojo. For example, you might read utopian science fiction and fairy tales about talking animals and poetry that scrambles your intellectual constructs. You could remember your dreams and ruminate about them as if they were revelations from the Great Beyond. You may also find it healthy to fantasize profusely about forbidden and impossible and hilarious adventures.

SAGITTARIUS (Nov. 22-Dec. 21): There are lots of inquiries and invitations coming your way -- perhaps too many. I don't think you should pursue all of them. In fact, I suspect that only one would ultimately make you a better human being and a braver explorer and a wiser lover. And that one, at first glance, may have not as much initial appeal as some of the others. So your first task is to dig deep to identify the propositions that are attractive on the surface but not very substantial. Then you're more likely to recognize the offer that will have lasting value even if it doesn't make a spectacular first impression.

CAPRICORN (Dec. 22-Jan. 19): "I find a lot of people physically attractive, but finding people mentally and spiritually attractive is different and much harder for me." So says 40ozshawty on her Tumblr page. If you share that frustration, I have good news. According to my reading of the astrological omens, you're due to encounter a higher-than-usual percentage of mentally and spiritually attractive people in the next six weeks. But I wonder how you'll deal with this abundance. Will you run away from it, feeling overwhelmed by the prospect that your life could get more interesting and complicated? Or will you embrace it, daringly welcoming the interesting complications?

AQUARIUS (Jan. 20-Feb. 18): I think you will generate good fortune for yourself by choosing between two equally invigorating but challenging tasks: losing your illusion or using your illusion. Both are quite worthy of your attention and intelligence. To succeed at either would fuel your emotional growth for months to come. You probably can't do them both, however. So which will it be: Will you purge the illusion, or put it to work for you?

PISCES (Feb. 19-March 20): Do you sometimes imagine yourself to be an underachieving underdog? If so, I suggest you start weaning yourself from that fantasy. Do you on occasion allow people to take advantage of you? It's time to outgrow that role. Do you ever flirt with being a self-pitying martyr? Say bye-bye to that temptation. Cosmic forces are conspiring to relieve you of tendencies to act in any or all of those ways. I'm not saying you will instantly transform into a swashbuckling hero who knocks people over with your radiant self-assurance. But you will, at the very least, be ready to learn much, much more about how to wield your vulnerability as a superpower.