Free Will Astrology, Week of June 8 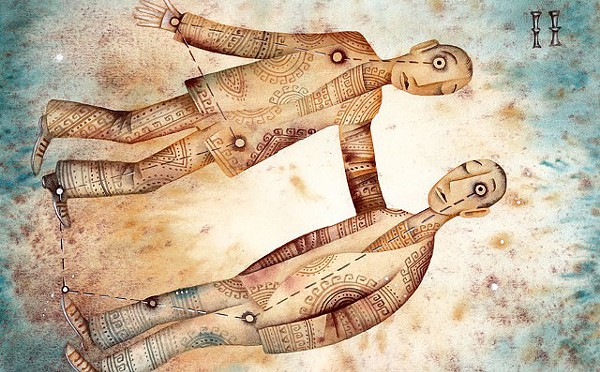 ARIES (March 21-April 19): "To look at a thing hard and straight and seriously — to fix it." Aries author Henry James said he wanted to do that on a regular basis. He didn't want to be "arbitrary" or "mechanical" in his efforts. I invite you to make this perspective one of your specialties in the coming weeks, Aries. Pick out a tweaked situation you'd like to mend or a half-spoiled arrangement you want to heal. Then pour your pure intelligence into it. Investigate it with a luminous focus. Use all your tough and tender insight to determine what needs to be transformed, and transform it.

TAURUS (April 20-May 20): Drug expert Jonathan P. Caulkins estimates that Americans are stoned on marijuana for more than 288 million hours every week. A U.N. report on global drug use concluded that Canadians consume weed at a similar rate. Among Europeans, Italians are number one and the French are fourth. But I encourage you to avoid contributing to these figures for the next twelve to fourteen days. In my astrological opinion, it's time to be as sober and sensible and serious as you ever get. You have the chance to make unprecedented progress on practical matters through the power of your pure reasoning and critical thinking.

GEMINI (May 21-June 20): I think it'll be better if you don't engage in much sacrifice, compromise, or surrender in the next two weeks. Normally they are valuable tools to have at your disposal, but for now they may tend to be counterproductive. Judging from the current astrological omens, I suspect you need to be more commanding than usual, more confident in your vision of how to take action with maximum integrity. It's time for you to draw deeper from the source of your own power, and express it with extra grace and imagination.

CANCER (June 21-July 22): You will soon be escaping — or maybe "graduating" is the right word — from your interesting trials and tribulations. In honor of this cathartic transition, I suggest you consider doing a ritual. It can be a full-fledged ceremony you conduct with somber elegance, or a five-minute psychodrama you carry out with boisterous nonchalance. It will be a celebration of your ability to outlast the forces of chaos and absurdity, and an expression of gratitude for the resources you've managed to call on in the course of your struggle. To add an extra twist, you could improvise a rowdy victory prayer that includes this quote adapted from Nietzsche: "I throw roses into the abyss and say: 'Here is my thanks to the monster who did not devour me.'"

LEO (July 23-Aug. 22): I propose a Friends Cleanse. It would be a three-week-long process of reviewing your support team and web of connections. If you feel up for the challenge, start this way: Take inventory of your friendships and alliances. If there are any that have faded or deteriorated, make a commitment to either fix them or else phase them out. Here's the second stage of the Friends Cleanse: Give dynamic boosts to those relationships that are already working well. Take them to the next level of candor and synergy.

VIRGO (Aug. 23-Sept. 22): After Walt Whitman published Leaves of Grass in 1855, he made sure it would get the publicity he wanted. He wrote anonymous reviews of his own book and submitted them to several publications, all of which printed them. "An American bard at last!" began the glowing review that appeared in one newspaper. According to my reading of the astrological omens, Virgo, you now have license to engage in similar behavior. You will incur no karma, nor will you tempt fate, if you tout your own assets in the coming weeks. Try to make your bragging and self-promotion as charming as possible, of course. But don't be timid about it.

LIBRA (Sept. 23-Oct. 22): If you carry out the assignments I recommend, you will boost your charisma, your chutzpah, and your creativity. Here's the first one: Try something impossible every day. Whether or not you actually accomplish it isn't important. To merely make the effort will shatter illusions that are holding you back. Here's your second assignment: Break every meaningless rule that tempts you to take yourself too seriously. Explore the art of benevolent mischief. Here's the third: Clear out space in your fine mind by shedding one dogmatic belief, two unprovable theories, and three judgmental opinions. Give yourself the gift of fertile emptiness.

SCORPIO (Oct. 23-Nov. 21): In the 16th century, roguish French author Francois Rabelais published a comic novel entitled The Life of Gargantua and of Pantagruel. In the course of his satirical story, a learned teacher named Epistemon takes a visit to the afterlife and back. While on the other side, he finds famous dead heroes employed in humble tasks. Alexander the Great is making a meager living from mending old socks. Cleopatra is hawking onions in the streets. King Arthur cleans hats and Helen of Troy supervises chambermaids. In accordance with the Rabelaisian quality of your current astrological aspects, Scorpio, I invite you to meditate on the reversals you would like to see in your own life. What is first that maybe should be last? And vice versa? What's enormous that should be small? And vice versa? What's proud that should be humble? And vice versa?

SAGITTARIUS (Nov. 22-Dec.21): There's no better time than now to ask the big question or seek the big opening or explore the big feeling. People are not only as receptive as they will ever be, they are also more likely to understand what you really mean and what you are trying to accomplish. Which door has been forever locked? Which poker face hasn't blinked or flinched in many moons? Which heart of darkness hasn't shown a crack of light for as long as you can remember? These are frontiers worth revisiting now, when your ability to penetrate the seemingly impenetrable is at a peak.

CAPRICORN (Dec. 22-Jan. 19): The writer Donald Barthelme once came to see the artist Elaine de Kooning in her New York studio. Midway through the visit, loud crashes and bangs disturbed the ceiling above them. De Kooning wasn't alarmed. "Oh, that's Herbert thinking," she said, referring to the metal sculptor Herbert Ferber, who worked in a studio directly above hers. This is the kind of thinking I'd love to see you unleash in the coming days, Capricorn. Now is not a time for mild, cautious, delicate turns of thought, but rather for vigorous meditations, rambunctious speculations, and carefree musings. In your quest for practical insight, be willing to make some noise. (The story comes from Barthelme's essay "Not-Knowing.")

AQUARIUS (Jan. 20-Feb. 18): Sidney Lumet was an American director who worked on 50 films, including 14 that were nominated for Academy Awards, like Network and Dog Day Afternoon. Actors loved to work with him, even though he was a stickler for thorough rehearsals. Intense preparation, he felt, was the key to finding the "magical accidents" that allow an actor's highest artistry to emerge. I advocate a similar strategy for you, Aquarius. Make yourself ready, through practice and discipline, to capitalize fully on serendipitous opportunities and unexpected breakthroughs when they arrive.

PISCES (Feb. 19-March 20): "It is not only the most difficult thing to know oneself, but the most inconvenient one, too," said American writer Josh Billings. I agree with him. It's not impossible to solve the mystery of who you are, but it can be hard work that requires playful honesty, cagey tenacity, and an excellent sense of humor. The good news is that these days it's far less difficult and inconvenient than usual for you to deepen your self-understanding. So take advantage! To get started, why don't you interview yourself? Go here to see some questions you could ask: bit.ly/interviewyourself.