From Art and Music to Food and Booze, There’s Plenty to Devour during Texas’ Most Livable Season 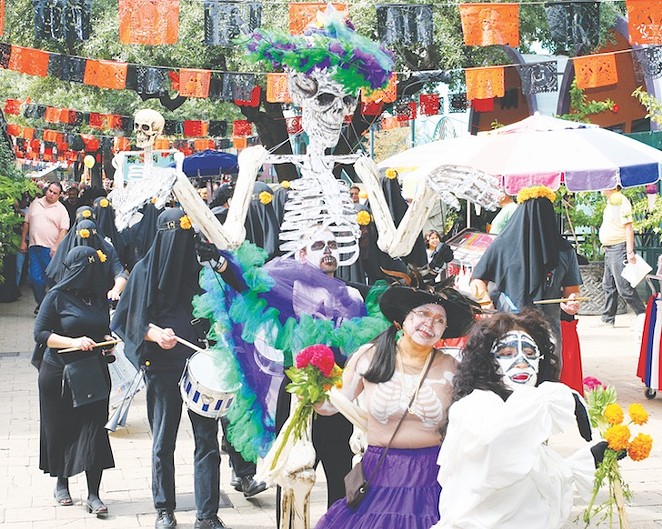 We’re finally out of the fire. While people across the country welcome the summer months, in South Texas we just try to survive them with plenty of AC and raspas. Here, we know the fun really starts once the season turns and gone are the days of triple-digit scorchers. With fall being a prime festival and events season in San Anto, there’s plenty to pull you out of that sweat-soaked summer hangover. Here’s what we’re looking forward to this fall:

It’s not just that the San Antonio Beer Festival, now in its 11th year, has grown into the largest local beer festival the city has to offer. With its move to Dignowity and Lockwood parks in 2016, after two years at Maverick Park, Beer Fest this year is yet another sign the city’s long-ignored east side is evolving, transforming and truly starting to thrive. The move to Dignowity Hill, which drew support from Mayor Ivy Taylor, District 2 city councilman Alan Warrick and Dignowity Hill Neighborhood Association president Brian Dillard when first announced earlier this year, will nearly double the footprint for the event. Which, of course, means you can expect an insane amount of top-notch brews, with more than 400 beers from more than 100 brewers scattered across the globe on tap – including unique, special-made cask offerings and one of a kind brewery collaborations. Benefiting the San Antonio Food Bank, the San Antonio Beer Festival welcomed 5,000 brew-lovers in 2015 that raised $89,329 for the organization. As if all that craft beer wasn’t enough excuse, you’ll be drinking for a good cause. $35-75, Saturday October 15, 1:30pm-6:30pm, Dignowity and Lockwood parks, 701 Nolan St., sanantoniobeerfestival.com.

Since its debut in 2009, the multidisciplinary arts extravaganza Una Noche en la Gloria has evolved into a happening that could literally only take place in San Antonio. Launched by Gabriel Quintero Velasquez under the umbrella of the Contemporary Art and Literature Organization (CALO) and sponsored by the Avenida Guadalupe Association, the free event unites musicians, poets, visual artists, performers, fashion designers and scenesters of all stripes for a wild night that takes over an array of Westside venues and — thanks to barricaded streets — maintains the community vibe of a block party. In addition to spoken-word presentations, art exhibits and live music on multiple stages, la Gloria (as fans call it) has won over many a fan with signature offerings like “Pop Yo Trunk” (a street-smart concept showcasing works by local artists in the trunks of low riders) and “Runway en la Calle” (a local fashion design showcase that plays out on a catwalk erected at the intersection of Guadalupe and Brazos streets). Produced by beloved local designer Agosto Cuellar and billed as “the most liberating runway event of the year,” Runway en la Calle’s 2016 edition combines individual fashion shows featuring designs by Golden Sky, Fabian Alejandro Diaz, Petricia Falcon, Angelin de Carlo and Cuellar himself. Free, 4-11:30pm, corner of Brazos and Guadalupe streets, lagloriaarts.org.

Rosedale Park will come alive with the savory wafting scent of 15 restaurant/chefs trying to outdo themselves for this year’s Huevos Rancheros Cook-Off and Gala put on by San Anto Cultural Arts. Hosted by two members of the community with a lasting commitment to the arts, King and Queen Huevo, the event is one of San Anto’s major fundraisers of the year. This year’s King, David Zamora Casas, is a painter, activist, installation artist and curator known as Nuclear Meltdown, whose work can be found inside the Henry B. Gonzalez Convention Center and San Antonio Museum of Art. Queen Rita Viduarri, was born in the city’s west side and went on to earn international acclaim as a singer and actress in the 1940s and ’50s. Casas and Viduarri will be part of the judging panel that picks the best traditional and contemporary takes on this breakfast staple. This year adds a new Artisans’ Market with more than 20 craft vendors who will be on hand with handcrafted goods for purchase, but don’t forget to bid on art from the silent auction, live band, art activities for the kiddos and more. $10 in advance, $12 at the door, Rosedale Park, 340 Dartmouth St., (210) 226-7466, sananto.org.

Oct 28-30: Alamo City Comic Con
San Antonio’s confab of cosplay and comic book nerds actually got off to a pretty late start. It wasn’t until 2013 that Alamo City Comic Con founder and director Apple de la Fuente tried to drag as much talent as possible to town to sate the desires of San Antonio’s geek class. Not surprisingly, Alamo City Comic Con quickly found there was a very strong local market for a top-tier con. If you believe festival organizers, ACCC attendance more than doubled its second year, reaching 73,000 people. They estimate that around 100,000 people came out to the event last year, meaning ACCC is now one of the largest cons in the country. Among the stars you can catch this year: RoboCop (Peter Weller), the Karate Kid himself (Ralph Macchio), Superman (the Dean Cain version, that is), Buffy the Vampire Slayer (Kristy Swanson), Dennis Rodman (who might as well be straight out of a comic book) and Lando freaking Calrissian (Billy Dee Williams). $30-$80 general admission passes, October 28-30, Henry B. Gonzalez Convention Center, 200 E. Market, alamocitycomiccon.com.

If it feels like San Antonio is quickly morphing into a legit music festival destination ... well, that’s because it kind of is. Consider the annual Maverick Music festival, which grew from headlining acts like Gary Clark Jr. and Girl In a Coma (while nothing to sneeze at, still local/regional talent) to the main draws being the Flaming Lips and Public Enemy in just a few short years (as we write in this week’s music section, Maverick’s new partnership with the Tobin Center is an encouraging sign next year will be even bigger). But no one’s ever tried quite exactly what Scoremore Shows (the young, premier hip-hop promoter in Texas) is hoping to pull off with the Mala Luna Music Festival. The first large-scale music fest to take over the old Lone Star Brewery touts a remarkable lineup for EDM- and hip hop-loving crowds alike. Top headliners include Kaskade, Houston phenom Travis Scott (who just finished a tour with Rihanna) and the indefatigable Steve Aoki alongside rappers Kevin Gates and G-Eazy. Not forgetting San Antonio’s homegrown talent, local artists IVY, VI$ION, Greg G, Mitch James, KWYK, and Phillip Wolf are all slated to perform. With a mix of EDM and hip-hop, it appears that Mala Luna will be something of a sister festival to Scoremore’s annual El Paso throw-down, the Neon Desert Music Festival. We say it’s about time we got our own. $119, October 29-30, Lone Star Brewery, 600 Lone Star, malalunamusicfestival.com.

In a city blessed with a growing abundance of Día de los Muertos events that encompass the traditional to the contemporary alike, Muertos Fest (aka La Villita presents Día de los Muertos) rises to the top of the heap with a festive mix that blends live music, artisan vendors, food and beer, hands-on workshops, a puppet procession and over-the-top ofrendas (altars) honoring the dearly departed. Locally focused while also showcasing acts from Austin and beyond, the two-day fest’s music portion has previously showcased the talents of Femina-X, Gina Chavez, Azul Barrientos, Piñata Protest and Master Blaster Sound System on the Arneson River Theatre’s picturesque stage. As for the altars — which compete for cash prizes ranging from $500 to $2,000 — previous submissions have celebrated everyone from Selena and Wes Craven to the defenders of the Alamo. Free, 10am-11pm Sat, noon-10pm Sun, La Villita, 418 Villita St., (210) 207-8614, muertosfest.com.

Back in 1963, the good people of New Braunfels decided to celebrate their deep German roots with a little celebration they dubbed Wurst Week. But the city’s love for all things Deutsch couldn’t be satisfied with a mere week. By 1967, the festival, now Wurstfest, moved down the way to Wursthalle in Landa Park, then grew to 10 days the next year. Since then, the festivities have only grown to keep up with demand — more entertainment, a bigger footprint, room for the kiddos, transport to and from festival grounds, the addition of craft beer. Now in its 53rd year, Wurstfest keeps drawing crowds and national attention from Travel Channel, Fox News and then some. This year’s celebration begins Friday, November 4 with live music scheduled across five stages and continues through November 13 with more than 40 national and international music acts, polka contests, a carnival, huge celebration of Bavarian cuisine, clothing and food vendors, and oodles pitchers of ice-cold German and craft wares to imbibe (don’t forget your stein). Dirndls and lederhosen are strongly encouraged. $8 in advance, $10 at the gate, free for children under 12; November 4-13, 120 Landa St., New Braunfels, wurstfest.com.

This shape-shifting festival has been many things since its founding by former mayor Phil Hardberger in 2008. While Luminaria started out as a one-night celebration of San Antonio artists, it soon grew into a block party of sorts after it moved to Hemisfair Park for a three-year run before heading back out to street-level, turning San Antonio into a can’t-miss arts destination for an entire weekend with performers and installations stretching from Central Library to the Southwest School to the Tobin Center. Last year, the roving multi-genre arts extravaganza took over the San Antonio Museum of Art and the surrounding areas on Jones Avenue.  Unfortunately, last year many of the festival’s big draws, like acclaimed minimalist composer William Basinski, got rained out and were never able to perform. This year, Luminaria is on the move again, this time to the city’s east side. Which means there will be stunning new murals along the Nolan Street Underpass, music from DJ-turned-civil-rights-lawyer-turned-Texas-State-Rep. Diego Bernal (along with collaborator and bestie Ernest Gonzales) and light projections on the Hays Street Bridge, one of the city’s most picturesque historic and architectural gems. We just really hope Luminaria’s got better luck this year. Free, November 9-12, luminariasa.com.