Get Exposed At The San Antonio Burlesque Festival

POC Photo
Whether a veteran or a first-timer, the SA Burlesque Festival is ready to make you feel exposed.

Gone are the days when the image of burlesque is a pale vixen with a very large feather. From bearded drag to sideshow, today's burlesque stars look beyond the birdcage for routines with an empowering punch and for two nights, only those stars will make San Antonio their playground.

Now in its fourth year, the San Antonio Burlesque Festival has gained momentum since its early days as a mostly local and regional showcase. Today's iteration of SABF packs a wild wallop, offering more than 60 performances of classic and neo-burlesque acts with renowned headliners from across the country.

Local performer Jasper St. James calls the festival a perfect introduction to burlesque: "Audiences come to the festival and it's their first taste of it. And what a way to get a taste!"

St. James collaborated with Dino Foxx and several others to curate and produce the event. Together, the curators represent three of the major troupes in town: The Pastie Pops, Stars and Garters Burlesque and La Petite Menagerie.

"We're a collection of people who are body positive and sex positive. I think in curating the festival it is a very important thing to us to make sure that everyone is represented as best as possible — all sizes, all genders, different races — people of different walks of life," Foxx told the San Antonio Current last week. 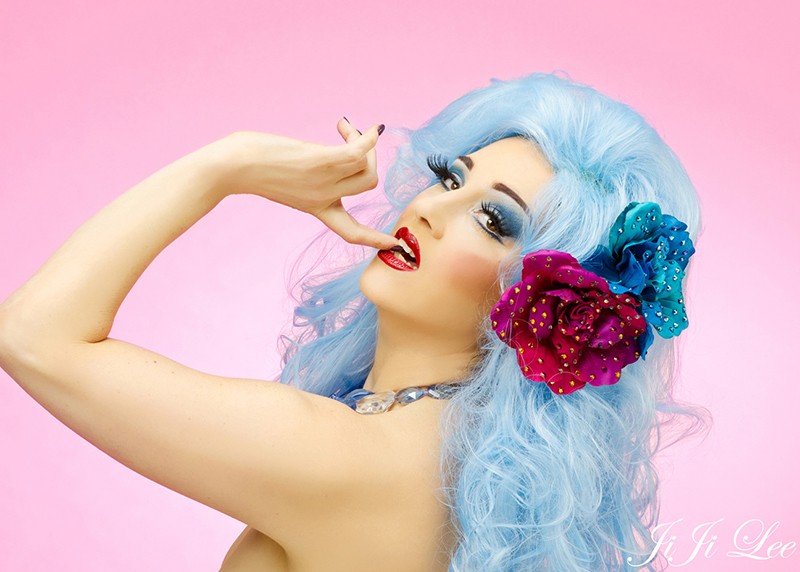 The end result is a show that includes "literally something for everyone." The Friday Night Showcase features performances from a bevy of local performers, as well as Ruby Rage, a New Orleans performer that sent shockwaves through the burlesque community after she lost her regular gig over her weight.

Ruby Champagne, the Los Angeles-based reigning Queen of San Antonio Burlesque, will bid farewell to her loyal subjects to make way for Saturday's crowning of a new royal court. "She's so perfect for San Antonio, her work tends to be very Latina-centered. She's just a little firecracker," Foxx said.

The evening concludes with a number from burlesque legend Judith Stein. Each year, the festival recognizes the work of a longtime performer that paved the way for today's performance culture. "It's good to honor those that have done this before any of us were even born," St. James said.

Referred to as "Mama Beave" by members of the burlesque community, Stein retired from her longtime career as a stripper while in her 40s, only to make a comeback in her 60s. As St. James put it, "It doesn't matter how old you are: When the bug bites you, it bites you."

Things heat up for the Saturday Night Spectacular as dozens of local and national acts stretch the boundaries of burlesque and vie for titles such as Best Duo, Best Costume and Most Creative.

Last year's audience favorite and Austin's only plus-size performance troupe, Fat Bottom Cabaret, returns to wow the crowd with its jaw-dropping choreography. While these gals don't strip, their act embodies the body-positive spirit of SABF.

"People in San Antonio are able to see people who look like they do and leave the festival feeling very empowered to see bodies like theirs showcased in a very beautiful and elegant way," Foxx said.

Other notable highlights include The Moonlight Dolls' magic burlesque act, a festival first that hearkens back to the days of vaudeville and duo Betty Blue and Zaftigg Von BonBon's unauthorized spin on Donny and Marie Osmond.

"I've taken this class and it is a workout. You may not think it is, but you are moving muscles that you never thought could move just to get those tassels to twirl," St. James said.

New York-based boylesque star Tigger! makes his Texas premiere to infuse a bit of danger into the onstage glamour and teach a workshop on acting burlesque.

"Pretty much anyone who's getting on the stage — they're an actor, whether they know it or not, so they better fucking know it," Tigger! told the Current via telephone from the back of a bus between gigs. Dubbed the "Godfather of Neo-Burlesque," his "real gender-fuck punk rock" performances border on the indescribable, exemplifying the changing current of SABF and the burlesque scene at large.

"And that's kind of the thing I love about it," Tigger! said. "You can expand what [burlesque] means to include almost anything. If it's got sex, humor and self-expression, then it's burlesque enough for me. And naked. Naked's nice, too."