I read it in a book

Assuming you and yours already own the local cannon (La Sandra, the Santos, the Gates of the freakin’ Alamo), consider expanding your horizons and signed-first-edition options with the following recent entries in the ever-expanding San Anto literary universe.

The Theory of Light and Matter
By Andrew Porter
University of Georgia Press
$24.95

This collection of stories by Trinity University professor Andrew Porter garnered the Flannery O’Connor Award for Short Fiction and a slew of critical praise. “Porter’s tales are brimming with characters both likable and bewilderingly human,” says Current critic Lyle Rosdahl. “We see in them our own flaws and shortcomings and desires. These are quintessentially stories about the desire for redemption, the search for meaning, and the need for human contact.” Which doesn’t leave much for Porter to cover in his next book, so this could be a one-off, making it all the more collectible. Plus, Porter’s handsome in a John Boy Walton sort of way. Flirt with him when you get your gift signed TONIGHT, Wednesday, November 19, 5-6:30 p.m. at the Twig, 5005 Broadway.

An oldie by our nanosecond culture’s terms, but a goodie, Kellman’s biography of Jewish-American literary prodigy Henry Roth explains why the groundbreaking author of Call It Sleep spent much of his life in self-abnegation and exile. Anomie, alcoholism, domestic abuse, frustrated genius, and incest, all handled with the cultural insight and tact you’d expect of a National Book Critics Circle award-winner and longtime Current and Texas Observer contributor.

The Holy Tortilla and a Pot of Beans

Published by SA’s Wings imprint, this PC-approved collection of South Texas/border lit is a twofer, supporting both a native bard of the West Side and a local press. In these short stories, magical realism dwells in harmony with straight-ahead prose and sentimental portraits of soul-searching and self-fulfillment delayed but not denied.

A bodice-ripper of sorts for the sour-mash and wooden-teeth buff in your family, Liss’s fourth practical-realism outing cushions McCarthyesque rogues with humor and sympathetic protagonists in the newly liberated American colonies. “The readers of historical fiction must want to put themselves in the shoes of such characters in such times, and The Whiskey Rebels provides them a very good shoehorn,” says Rosdahl of the novel — which we take to mean it’s too much fun to be stretched into a castor-oil miniseries starring Laura Linney and that guy from Sideways. 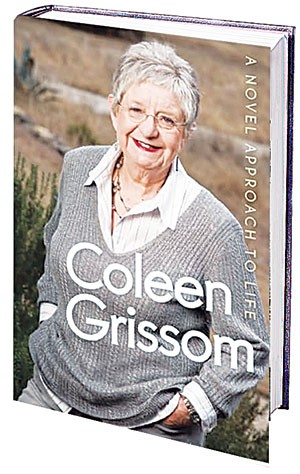 If you don’t wade into this collection of ceremonial speeches from some 30 years as an academic personage expecting SA’s answer to Cynthia Ozick, you’ll no doubt enjoy the low-sodium, high-fiber advice culled from decades spent nurturing generations of college students on their journey from goslings to geese. “I love Coleen Grissom!” exclaimed a Liberty Bar staffer and former Trinity student when the Current plunked down her copy on the bar (the better to enjoy it with a bourbon). “So wise.”

Bexar Tales offers 12 classic children’s stories, delivered by a cross section of SA political, media, and business celebrities. The disc, produced by KTSA 550 in their studios, benefits the Family Service Association. For a good cause, you can bask in the storytelling magic of 2009 mayoral hopeful Julián Castro, KENS-5 weatherman Bill Taylor, a collabo from Brent Boller and Elizabeth Ruiz, and retired homebuilder Gordon Hartman. No, David Robinson couldn’t contribute to the project, but what about Susan Reed stealing the show with a method-acting “Three Little Pigs,” complete with suspenseful sound effects? We doubt Tommy Lee Jones or Eva Longoria could top that for sheer novelty value. Bexar Tales will be available until the end of this month at Magnolia Pancake Haus and all Cowboy Cleaners locations.

Even Santa Claus sends the jobs he is unable or unwilling to do to Mexico. The jolly old outsourcer enlists his primo Pancho to deliver presents along the Texas-Mexico border, and his young nephew Vincent stows away in the present sack, in this colorful storybook by local author-
illustrator Xavier Garza. Pancho, dressed in a mariachi suit, pilots a wagon hauled by flying burritos (the non-delicious, non-musical sort). The simple South Texas Christmas tale is printed in both English and Spanish, allowing for
several different bilingual reading opportunities, a logical choice for a book that pointedly asserts: “Not even rain or cloudy skies or walls or wire fences keep them from crossing back and forth to El Paso and Ciudad Juarez, to Roma and Miguel Aleman, to Rio Grande City and to Camargo. ... The border is his home!” Charro Claus is the perfect gift for the children of your Minute Men relatives. 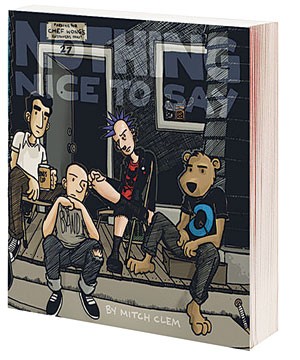 Nothing Nice to Say
By Mitch Clem
Darkhorse
$9.95

Cartoonist Mitch Clem has since moved to SA, but Nothing Nice to Say, the self-proclaimed world’s first punk comic strip is set in his previous hometown, Minneapolis. Not that it matters. Blake and Fletcher, Nothing Nice’s protagonists, are universal archetypes, cynical music geeks making hopelessly dorky inside jokes at the expense of bands most normal people never heard of. Like his characters, Clem’s working from an encyclopedic punk-rock knowledge, but most of this volume, collecting strips from his popular internet comic of the same name, works independent of trivia. His dead-on depiction of the weird love-hate dynamic between super fans and the musicians they obsess over goes beyond genre. This first collection of selections from Clem’s website (mitchclem.com), occasionally falls as flat as the Sunday comics, but unlike Marmaduke or Cathy, many of the jokes here work, finding humor in discussing relevant topics such as what it means to create in a capitalistic society and or to be a music fan in the post-Napster era. Also, there’s cussing. Garfield readers have been warned. •