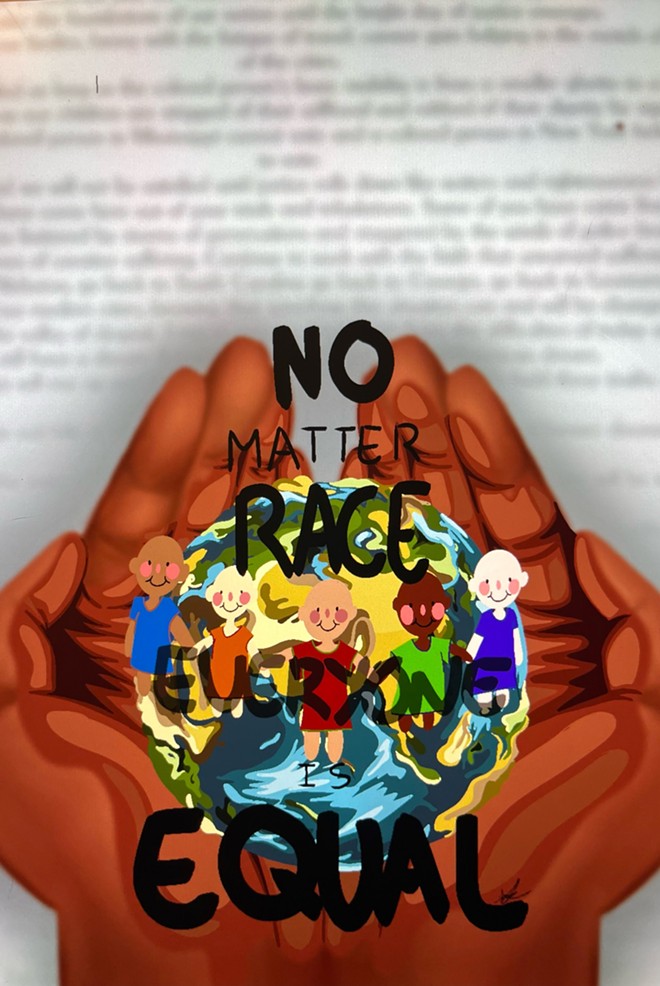 Courtesy of IDEA Public Schools
Henderson used digital art to create her winning piece for the MLK, Jr. Commission Art Contest.
Now in its eighth year and with its biggest pool of submissions yet, the City of San Antonio Department of Arts & Culture and Martin Luther King Jr. Commission's Citywide Art Contest is more competitive than ever.

This week,  IDEA High School student Shelby Henderson was announced as winner of the contest for her piece titled “No Matter Race Everyone is Equal.”

Henderson, a fifteen year old student at IDEA Burke College Prep, used computer graphics to create her digital work. Her submission was one among 60 art pieces drawn from students around the city, a record number for the contest.

"Every year, this art contest gives us an opportunity to celebrate the talent of young people across the city,” District 2 Councilman Jalen McKee-Rodriguez said in a statement. “Students submitted artwork in various mediums and we were blown away by how beautiful and unique each piece was. We are so proud of what Shelby managed to accomplish and are expecting a very bright (and artistic!) future for her!"

Henderson's artwork will serve as visual representation for the 36th Martin Luther King Jr. March and Celebration, which is expected to hit record participation this year after being slated to return in-person following two years of virtual marches. The march is regularly billed as the biggest march in the nation and usually drawing around 300,000 participants, and the city of San Antonio tripled its contribution from $100,000 to $300,000 for the 2023 event.

The march, which has taken place in San Antonio since 1987, will kick off at 10 a.m. on Monday, January 16 at the Martin Luther King Jr. Academy (3501 Martin Luther King Drive) and end at Pittman-Sullivan Park (1101 Iowa St.), where marchers will be greeted by a celebration. The event at the park will feature a multicultural performance stage, a health and wellness area, youth area, food and merchandise vendors and information booths.