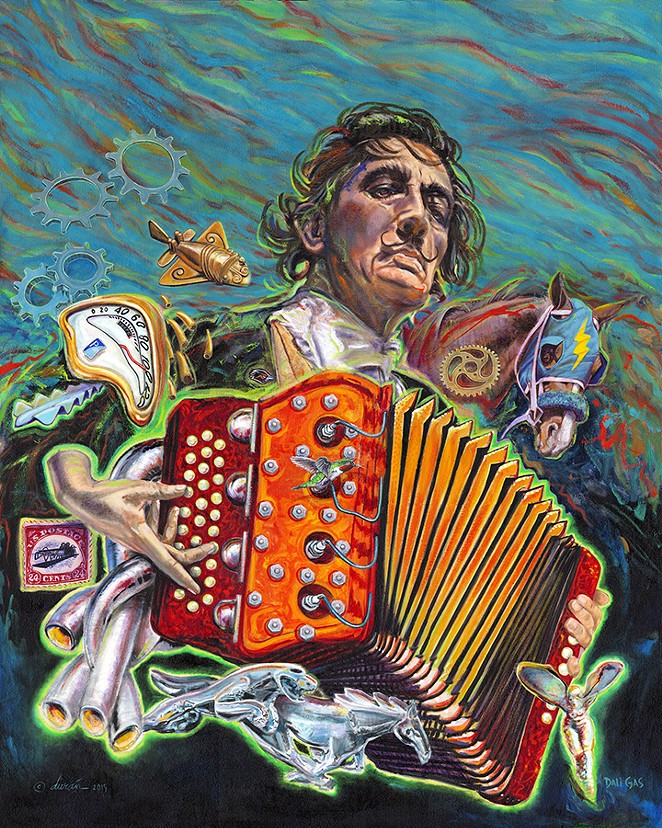 Gilbert Durán, Dalí Gas
Gilbert Durán is a one-man artistic institution — a self-taught pintor who, over 45 years of making art, has dabbled in the artistic styles of the masters while creating his own. His paintings have transformed over the years; from early wildlife landscapes to hot-rod images of his hometown, Durán sees the world with a brush in one hand, a glass of red wine in the other.

It is Durán's Frida Kahlo tribute, Frida Margarita, that readers will most likely recognize. She oversees Rosario’s in Southtown while holding a margarita — on the rocks with salt. Aptly completed just in time for the 35th edition of the Guadalupe Cultural Arts Center’s Tejano Conjunto Festival, Durán’s latest work is Dalí Gas. The title is a play on Tex-Mex slang (“dale gas”) and features surrealist painter Salvador Dalí playing an accordion. If you squint, the subject might begin to resemble a certain local Grammy-winning accordion player. I recently sat down with Durán to discuss the work.

How did the painting come about?
The Dalí Gas painting almost never happened. I had been painting at my studio in El Paso about 10 years ago. I had come to visit San Antonio and was flying back [to El Paso]. I happened to see Flaco Jiménez at the airport. I took a chance and went to introduce myself and he said, “I know who you are.” I asked him for a photograph for a painting. I told him about my series of accordion players, my “Dale Gas” series ... Texas Tornados always started playing by saying, “Dale gas.”

I love Mingo and those shirts he wears. So, Flaco at the airport …
Right off Flaco said, “Oh, no. Everyone takes my photographs and uses them without permission.” I thought maybe that was the wrong time to approach him. I was stunned. Another part of me thought, oh yeah, we’ll see about that. I really don’t need permission. He’s a public figure. I always wanted to paint him, but I respected his answer. I’ve always been an aficionado of his music. I felt wounded. I stopped painting the series. One day I was looking through a magazine and I happened to run across an image of Salvador Dalí that reminded me of Flaco. When I saw it I thought, There it is. Dalí Gas. I started putting the painting together in my mind. “Give it gas.” I started including different modes of locomotion in the painting: car emblems, car mascots, anything that generates speed.

When did you finish it?
This year, but I’ve been working on the canvas about seven years.

How old is Salvador Dalí in your painting?
Artists never age. It’s all the good wine and late hours.

The image has a strong reference to Dalí’s surrealism.
The Vespa speedometer resembles Dalí’s painting The Persistence of Memory, with the melting clocks. I also included the Jaguar, the Mustang, the Rolls Royce ... airplane and race-horse references ... gears that create locomotion.

Loco-motion.
I have a “floater” that may or may not exist and the gold “space shuttle” Pre-Columbian artifact that does exist ... The accordion takes on a body of a Ford flat-head engine with the spark plugs and exhaust pipes. The hummingbird softens the motor.

The man in your painting, Salvador/Flaco, has great hair. I like his face. He’s rugged but attractive. Do you think the public will look at your painting and think of Flaco?
I guess about 50 percent of people who look at it will say it’s Flaco. The message is there.