It’s hard to wrap our minds around an all-day, citywide art event — the organizers direct us to its inspirations, Paris’s Nuit Blanche and Madrid’s Noche Blanca … but what about San Antonio? What’s to expect here? Luminaria: Arts Night is the first of its kind in the city and the second in the nation, and artists are coming out of the woodwork to participate in this truly exceptional celebration of the arts. (When it comes to artist-driven festivals, though, let’s not forget Contemporary Art Month, the marathon of openings and events held every July. The nearly 23-year-old festival is similar in purpose to Luminaria, but you have 31-plus days to pace yourself.)

More than 200 performances and shows are lined up for Luminaria. From gallery exhibitions to street poets, there’s definitely a diverse blend of arts and entertainment. Local band Fields of Forel will perform in front of the Convention Center — a guerilla mobile musical performance complete with acoustic piano and vintage van. Band member Aurelio Laing III says they’ve been working on making 12 to 14 luminarias that will be part of their performance. Near the Alamo Plaza gazebo, Larry Graeber’s wood-frame, freestanding tower will feature an aluminum finish that will reflect the 100-plus glow sticks that Graeber will insert into sections of the piece.

Gazebos turned into kaleidoscopes, glass-blowing demonstrations, video-art projections, and music on every street corner is merely a sampling of what to expect as artists, musicians, filmmakers, and more will be at the forefront. With six downtown sites to catch non-stop performances and a fireworks finale, you’re thinking, doesn’t this have a Fiesta-like ring to it? Although we’re sure you can easily find a turkey leg in the crowd somewhere, the difference here is that each stage will feature a plethora of performers — from the Alamo Plaza stage where the Youth Orchestra of San Antonio will perform a 30-minute set or find Dama de Luz’s steel and plexiglas structure illuminated with LED lights on Houston St. to the revue of local theater lumaries such as the Renaissance Guild and Guadalupe Cultural Arts Center at the Magik Theatre. Here’s looking forward to the artist-driven mania that Saturday has in store.

Here are a few critics’ picks (and a diss) to help you find your way during the night.

Weeks before Potter-Belmar Labs (Leslie Raymond and Jason Jay Stevens) embark on a West Coast tour with their new interactive work Fortune, they’re teaming up with local visual artist Stuart Allen for Mixing Chamber. Allen is no stranger to SAMA — his site-specific work “29º 26’ 14” N ~ 98º 28’ 55” W” fills the ceiling of the museum’s Great Hall. For Luminaria, the team will use tall fabric screens, three channels of video, and multi-channel audio — turning SAMA’s Cowden Gallery into a large mixing chamber with overlapping audio and visual symbols. It’s a living and breathing “giant luminaria” created with 21st-century tools.

Kimberly A. Suta:
The Theory of Everything
Film @ the Kress Building

If you didn’t check out the October 2007 screening of The Theory of Everything at the Drafthouse, you’re in luck. Suta’s labor of love in black-and-white neo-noir is an experimental film inspired by noir flick Touch of Evil (a favorite of Theory of Everything director Mario Aguilar, Jr). The film utilizes Texan acting talent (the lead, Susan Seydler, is from good ol’ SA) and local spots such as the Havana Hotel and the San Antonio Botanical Gardens. This detective drama follows the usual murder-mystery formula, but it becomes a true art piece with the help of local fashion designers Agosto Cuellar and Angelina Mata. 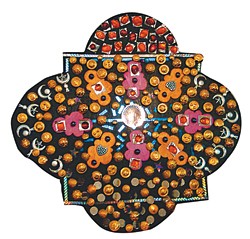 In November 2007, Joan Fabian’s works were the first to grace the walls of REM Gallery’s new quarters. Now she finds herself one of the firsts yet again as she participates in Luminaria. Fabian will unveil nine sculptural paintings on the awning of the buildings next to Peacock Alley and Broadway. Her works are reflective, which will fit nicely with the large disco ball that’ll be hung on Broadway. For her new works, the multiculturally omnivorous Fabian took inspiration from living in Pakistan and a local decorative tradition that consists of decorating trunks with reflective images. Plus: elusive World Funk geniuses Barrio Massive, playing in the adjacent alley, will introduce your milkshake to that big, shiny ball.

Get ready for a ballet extravaganza when the Ballet Conservatory of South Texas showcases excerpts from their May program during Luminaria. Crowd favorite Limberna combines music and dance set to the beats of African and Classical music, while Mi Corazon is upbeat, with contemporary dance numbers, including tango, set to up-tempo techno music. The company will also preview the ending of Novellas, four short stories that tell the tales of lovers.

Jump-Start is presenting a double-bill of one-acts as works-in-progress. In its current incarnation, Max Parilla’s obviously heartfelt Irish/Chicano isn’t, I think, salvageable: putatively an exploration of poor Irish and Mexican soldiers on the eve of the Mexican-American War, the play comes across as didactic, bizarrely anachronistic (“chill pills” in 1846?), and ultimately uninvolving. Billy Muñoz and Daniel Jackson’s The Case of the Neon Twins plays a lot like Blade Runner in the Alamo City, with a spiffy neo-noir projection design. The production falters, however, on its muddled script, and the tragic miscasting of a gumshoe detective. Jump-Start plans an extended version for next season.

La Colectiva and Comedia A Go-Go team up for this innovative multimedia and performance variety show. How can you go wrong with the guys that brought you the hilarious spoof of VH1’s Behind the Music — as Go-Go calls it, VH juan Behind the Musica? The show will feature music by SF Bluesers, poetry, stand-up, and, of course, live sketch comedy. ¡CAPiROTADA! is written, directed, and produced by think tank madmedia/RESET Collective. The Luminaria performance will be recorded in front of a live studio audience and will serve as a pilot episode for broadcast television.

Texas Public Radio (KSTX 89.1 FM) one-ups everyone by partnering with KRTU 91.7 FM and KSYM 90.1FM to present visual art, theater, and streetside musicians in person and over the airwaves. TPR will feature the World Music stylings of Mwendo NuSpirits Drummers and Mombasa Code, KRTU will bring to the stage Eric Rivas, and KSYM ends the night with N’Black Oasis and Hyperbubble. Spoken word poetry will be provided by Bryce Milligan, Carmen Tafolla, Ben Judson, and Trey Moore. And three of the city’s top artists, Katie Pell, Chuck Ramirez, and Gary Sweeney will show their work.

Affection for a day-long party (lubricated with live bands and DJ action) aside, what’ll draw me out of my casa for this Saturday’s art carnival is the abundance of new-media work. Michele Monseau’s contemplative, sometimes unsettling pieces are included in the full-on video showcase at the Kress Building, and several other video projections are scheduled for various festival locations. But to hear UTSA new-media prof Leslie Raymond (one-half of Potter-Belmar Labs) talk about her students’ exhibition is to schedule your Luminaria peregrinations around it. Showing in a space on Houston Street, the set promises experimentation, formalism reimagined, and humor. Raymond spoke enthusiastically about Utah Snyder and Mike Stoltz’s “deluminate” collaboration (image left, in which they will will be “requesting your participation ... Claim your prizes at the door”), and the work of Taro Hanrahan and Kristin Larsen, who produced “Synesthesia” as the partnership Domestic Zombie. Hanrahan allowed that it deals “with liquid and light in motion.” Certainly art’s been made of less.

When dusk hits, the party begins, right? Luminaria: Arts Night actually begins when the galleries open their doors. Here are a few events worth checking out before downtown gets jam-packed for nightfall.

Also, the Alameda and the Witte Museum are offering free admission all day.