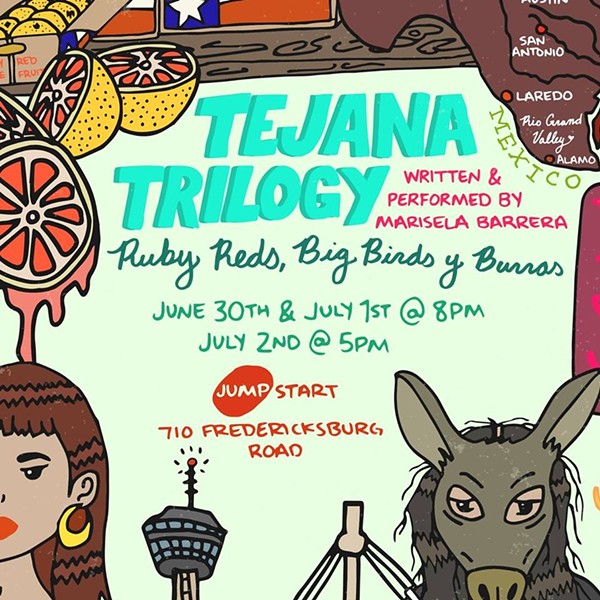 If there were a Chicano version of Tinder, Ruby Red would be the first to admit that she’s swiped right a little too often.

She’s the mujer who’s dated too many men and in all her years, has had a little too much fun. And in “Ruby Reds, Big Birds y Burros”, the second installment of the Tejana Trilogy — a three-part play written by San Antonio-native Marisela Barrera — Ruby Red is the “chicana everywoman.”

“Everybody knows this woman,” says Barrera, “there’s a part of her in all of us that we can connect to.”

In the second piece of Barrera’s trilogy, audiences will have the pleasure of meeting Ruby Red, as well as Big Bird (think modern-day Lechuza) and Cuero, an older man who is related to the Donkey Lady — yes, that Donkey Lady — and has his own set of problemas. The three characters’ paths eventually cross in Barrera's latest piece, in which she’ll be the only performer on stage during the Jump-Start performance.

“I’m experimenting with language and space,” says Barrera, who is also preparing for the show’s second run at the Guadalupe Cultural Arts Center, where she’ll be joined with a cast of actors next month. The first performance, she says, will be much more intimate. Which seems fitting for a play that aims to hit so close to home.

Taking place in a city that mirrors San Antonio, audiences will recognize iconic spots like Saluté and Bill Miller’s, and will be familiar with the play’s South Texas slang and Tex-Mex flair.

“[The story] is very localized, but with universal themes,” Barrera explains. Which is why she chose Jump-Start as the space for the play’s debut. The first installment of the Tejana Trilogy, “Cuero, La Ruby Red y El Big Bird” premiered at Jump-Start, where Barrera is a company member and long-time supporter. So naturally, performing at Jump-Start, she says, “just feels right.”

To match the atmosphere of her performance space, Barrera brings a simple approach to set design and costumes. We can expect a mask to help portray the character of the Donkey Lady, but other that, most of the costumes we’ll see will be toned-down ensembles with plenty of room left for the imagination. Barrera will be accompanied by sound designer and musician George Garza, Jr., and the play will run about an hour and a half in length.

“This is no marathon show,” Barrera says, “it’s local theater.”

When asked what’s in store for the conclusion of the trilogy, Barrera says that the ending is already written. She has a stack of manuscripts, in which she’s already written about 160 pages of material, most of which, she’s had to cut down and plans to turn into a separate play. As for the characters in the Tejana Trilogy, we can expect to meet them again in Barrera’s short story collection, which she’s currently in the revisions stages of. Though she’s still searching for a publisher, a book comprising her work is definitely on the horizon.