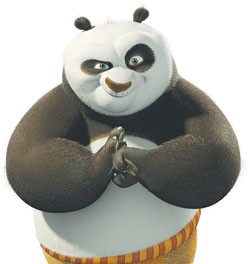 
If you love martial-arts movies, particularly the Shaw Brothers productions of the 1960s and ’70s, you’ll probably smirk through most of Kung Fu Panda, the latest attempt by Dreamworks Animation to rise to the standards of its Shrek trilogy.

Po the panda (voiced by Jack Black) is a highly ambitious soup vendor living in the Valley of Peace, a tranquil community unthreatened since the murderous white tiger Tai Lung (Ian McShane) was imprisoned 20 years ago. Of course, Tai Lung is about to escape and ruin all that tranquility. The kung-fu school’s Master Oogway (Randall Duk Kim), a tortoise Yoda who’s already envisioned this threat, must now choose the Dragon Warrior from his school. The perfect student will learn the secrets of unlimited power from the fabled Dragon Scroll. However, just as Oogway’s about to pick Tigress (Angelina Jolie — one of five students that represent the ancient forms of kung fu: tiger, monkey, mantis, snake, and crane — Po screws everything up by landing before Oogway’s pointed finger.

A fat, seemingly unintelligent panda that only kicks ass in his dreams must now save the Valley of Peace from the most dangerous kung-fu warrior ever. Needless to say, this does not make the five students or their crotchety teacher, Master Shifu (Dustin Hoffman), very happy. The traditional kung-fu training sequence — with a field as elaborate as the school in The 36th Chamber of Shaolin — is actually an attempt by all students to drive the oblivious Po from the school.

The problem with Kung Fu Panda is that unlike the Shrek movies — which satirized popular fairy-tale mythology and juxtaposed them with contemporary pop culture —Panda does nothing more than pay homage, often lazily, to the genre that inspired it. It’s almost as if Po’s adventure is especially reverent to America’s bad direct-to-video 1980s movies that Hong Kong cinema inspired. Most broad movie audiences — outside Quentin Tarantino and the Wu-Tang Clan — can’t reference martial arts flicks the way we all intimately know fairy tales.

Worse, Panda’s filmmakers ignore the narrative tropes that were so important in martial-arts movies, such as honor and chivalry, two concepts that aren’t even touched upon here. The life lessons of kung fu are wholly unimportant in this kung-fu adventure. Moreover, Panda’s humor mostly comes from fat jokes and Black’s dopey persona instead of the genre itself — with the exception of an inspired chopstick sequence. The trailer, which incorporates Tomoyasu Hotei’s “Battle without Honor or Humanity” from Kill Bill, Vol. 1, sadly makes the movie look infinitely more fun and self-aware than it actually is. •