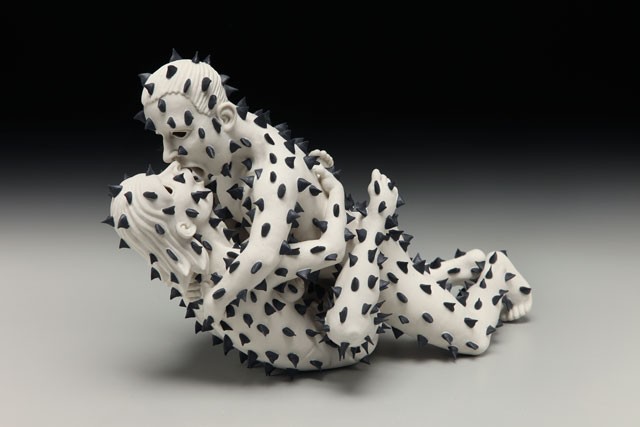 Ceramics, with its base in utilitarian objects — cups, bowls, and other vessels — has long been regarded as a stepchild to the arts, a craft. Compounding the bias was the association of food containers with women's work, cooking and such. Though the arrival of programs in ceramics to university art schools in recent years has somewhat altered things, clay is still perceived as a bit of an interloper, not part of the noble tradition of painting or quite good enough for sculpture. Which makes it an ideal medium for political expression.

"MOCK/BITE," organized by Southwest School of Art, brings five artists together who work in a variety of methods from hand-formed porcelain to slip-casting (molds), high luster glazes, hand-drawn surface design to decal transfers and over-glazing commercial clay goods and even plastic figurines. What they have in common is a discontent with the persistent state of things, ranging from art and social hierarchies to never ending warfare. In short, they're pissed.

Of the many pieces in the show, Ajax, by Florida-based Pavel Amromin is the clear showstopper. Named after the regular-guy warrior in Homer's Illiad, like his namesake, he has not been destined for superstar status. Perhaps recently discharged in his military cap and not much else, he appears to have just shot-up to ease the pain. But this small work is lovingly made, the musculature carefully portrayed along with a different sort of nobility.

Military affairs are also the subject in large vessels by Michele Erickson of Virginia. Topped with gun-toting cherubim, or emblazoned with decals portraying child soldiers in Africa, the overly embellished teapot and urn have no practical use.

Russell Biles works in South Carolina, a region with a long ceramics folk tradition that has been enlivened by contemporary art trends. Dealing with overt political themes, he portrays conflict metaphorically, placing emblems of lost American identity, such as the Statue of Liberty, in the jaws of a shark.

Race, class, and kitsch, converge in works by Linda Vallejo from California and Benjamin Schulman of Maryland. Vallejo's "make 'em all mexican" series takes commercially produced figurines and over-glazes them with bright colors and dark complexions.

Schulman ups the ante, and increases the "eeew" factor. Though not African American, he deals in blackface as a tactic to out the fear of "the Other" that has engulfed America since 9/11. Made not of clay, but glazed plastic, a little girl skipping on flowers is weighed down with bling, her innocence stolen by the consumerism endorsed by pop culture. It's a disquieting piece, seeming to say: "The culture wars are over. We lost."