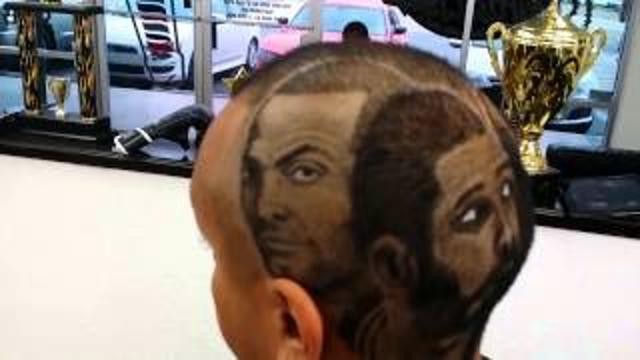 Sometimes, jerseys, and t-shirts aren’t enough to express ones deep love for the Spurs, but a tattoo is just too far.  Perhaps, the middle ground is getting a haircut dedicated to the Spurs.

San Antonio barber, Joe Barajas of Kardzmatic Barbershop, has been sculpting Spurs players into customers’ scalp as far back as 2006, reports Spurs Nation.  And “Mount Spursmore,” is his latest tribute.

“Mount Spursmore” features the faces of Tim Duncan, Kawhi Leonard, Tony Parker and Manu Ginobili sculpted into  a close-cropped haircut.  Each player’s face has a different facial expression, and the resemblance of each Spurs player is spot-on.

His inspiration came from a similar haircut he did last year.  It featured only three of the Spurs: Tony Parker, Manu Ginobili, and Tim Duncan.  He added Kawhi Leonard to monument because Leonard plays with a lot of passion and has really stepped it up for the Spurs, says Barajas.

Baraja says his next creation will involve Coach Popovich.

Why did Baraja create such a unique monument to the Spurs?

"To show people that's what we do in San Antonio... [w]e build our super stars from the ground up."