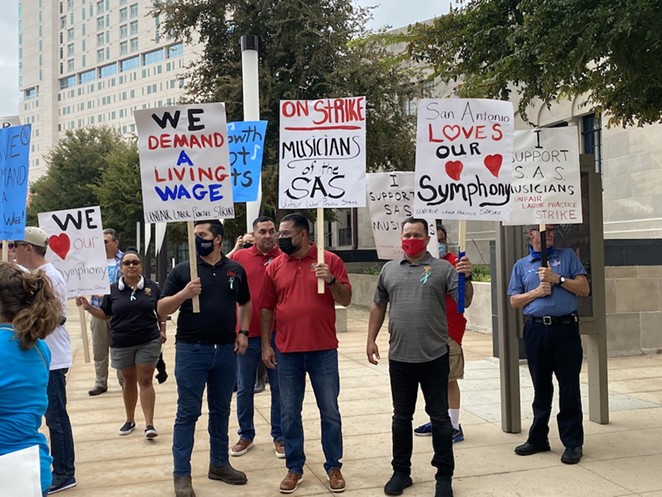 Sanford Nowlin
San Antonio Symphony musicians and supporters picketed outside the Tobin Center on Oct. 12.
The San Antonio chapter of the American Federation of Musicians filed a charge with the National Labor Relations Board (NLRB) Monday alleging unfair labor practices by the Symphony Society of San Antonio.

The Symphony Society, which employs the musicians that make up the San Antonio Symphony, has been locked in a contract dispute with the performers since September.

The NLRB charge — filed by the union chapter on behalf of the Musicians of the San Antonio Symphony (MOSAS) — alleges the Symphony Society committed nine violations of the National Labor Relations Act.

The Symphony Society was unavailable for comment at press time.

The orchestra's musicians have been on strike since late September, after the Symphony's managing body voted to impose the terms of a "Last, Best and Final Offer," which would make sharp cuts to the ensemble's personnel and wages.

MOSAS detailed portions of the NLRB charge in a press release Monday.

The NLRA violations alleged in the charge include the following:
The charge also maintains that the Symphony Society "altered the reason for contract negotiations — to revisit musician salaries after musicians agreed to an 80% pay cut during the pandemic — to impose steep cuts not related to the pandemic."

As the strike continues, members of symphony orchestras and classical music presenters nationwide have donated or pledged funds to support the San Antonio Symphony musicians.

According to MOSAS, these funds total $137,190, which amounts to one and a half times the total of projected corporate donations for the 2021-2022 Symphony season.

"Our management’s projected total corporate donations were $90,000 for the season, which is shamefully low," MOSAS chair and principal second violinist Mary Ellen Goree said in a statement. "We are heartened by the support of our colleagues across North America but embarrassed on behalf of our city to be getting such attention for this attempt to destroy our orchestra."