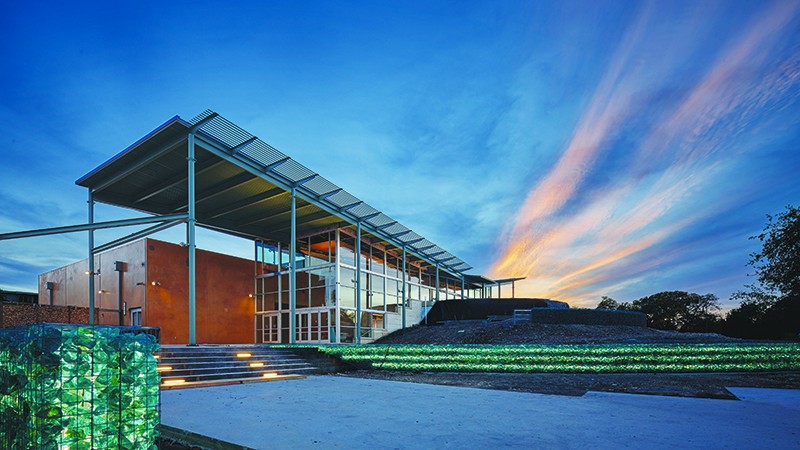 It's always the most stimulating and visually engaging places, like museums and galleries, which enforce strict "do not touch" policies, as if bystanders could ever hope to truly become a part of what they're seeing.

The DoSeum aims to break that mold.

Imagine a museum, built from the ground up, to be an imagination-activating wonderland. Imagine a place where children and adults alike are encouraged to mix it up with the exhibits, to play with things and figure them out, to climb, to ask questions and find their own answers.

Imagine a place where learning feels like playing and investigation is consistently rewarded with an endlessly unique array of discovery.

The DoSeum is a testament to the fact that ideas and imagination can, quite literally, change space and alter reality. You have to see it — or rather, you have to do it — to believe it.

The long-awaited opening of San Antonio's new cutting-edge children's museum takes place this weekend. Maybe you read about this place over the past few years or likely noticed the vacant lot on Broadway — the construction with the Mad Max vibes — transform into a bright, inviting and singular-looking complex.

Maybe you caught a spot about it on a local TV news program. Maybe you were bummed about the old SA Children's Museum shuttering its doors after nearly 20 years in the middle of downtown (the building is now for sale).

Or, maybe you haven't heard or seen anything about it yet. If so, that may soon change — particularly if you have kids.

Whatever you know about The DoSeum up to this point, it's a good idea to take a moment to step back and appreciate the scope, breadth and depth of this historic undertaking. More than five years in the making and trying the imagination, intellect, perseverance, planning and patience of many of our city's finest minds, the many lessons The DoSeum has to teach begin with its conceptualization and execution.

Doers That Did It 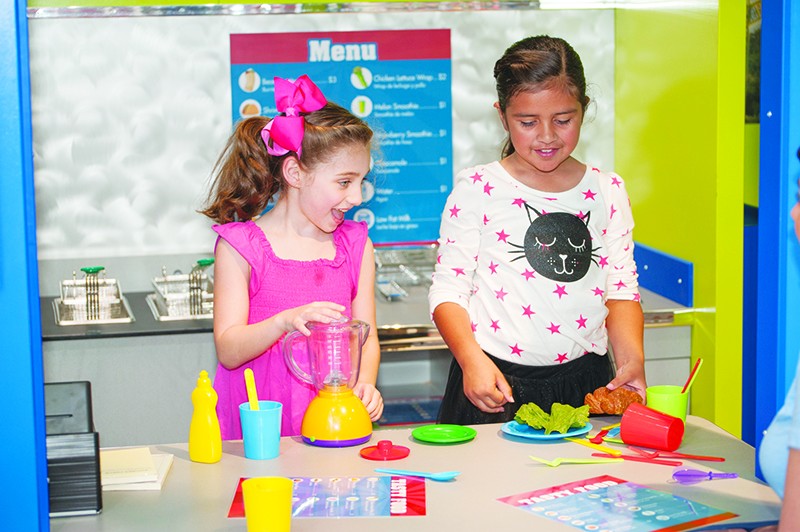 Courtesy
Young chefs in the making can tinker with new recipes in The DoSeum's interactive Tiny Town exhibit.

When you set off on a mission to become truly unique, you must focus on defining and honing that which will distinguish you from the rest. This, unquestionably, takes some doing. Charles Butt, H-E-B's chairman, donated $20 million to jump-start the project. And then there are scores of other donors, planners, lobbyists, educators, builders and dreamers that helped make The DoSeum come to fruition.

Hurd is more than a figurehead, more than an executive. A mother of three and the director of SA Children's Museum since 2008, she's invested in the project as a parent, educator and community steward. For the longtime teacher and former director of Teach for America Houston, The DoSeum has been a bona fide labor of love.

As she walked around the $47 million, 104,000-square-foot campus (indoors and outdoors) on Broadway across from Brackenridge Park, one quickly sees why for her this project has to be as close to perfect as possible. As she discussed plans for the new space, she stopped numerous times to stoop down and pick up trash from ongoing construction and straighten out parts of an exhibit.

"The driving intent for The DoSeum is to create a space that inspires and wows kids, a space that gets them to think creatively and to problem-solve and to think critically," she said.

For Hurd, it is not enough for the new museum to become an important destination. She'd rather see it as a permanent institution, a fixture in the San Antonio learning landscape — "a key resource and laboratory for research and investigation into early learning."

But she's not going to just sit back and see if it happens. Teachers and parents, get ready to literally be part of the action.

"We want to work with teachers and school communities to help empower their efforts and to help provide learning opportunities that just aren't possible in a classroom setting or behind a desk," Hurd told the Current. "And then, of course, we want to be a vibrant resource for parents. Parenting is among the toughest jobs that many of us will ever take on and museums are a safe and supportive place to think about, and be supported in, your role as your child's first teacher."

As for the facility itself, the architectural design is a model of sustainability and innovation.

Rabke explained that, for Lake Flato as a locally-rooted firm, it was "very personally important for us to charge after this project." And charge they did. They won the architectural bid to design The DoSeum.

Rabke said he was most "excited about the potential for outdoor spaces" and that he "wanted the museum to feel almost like an extension of [Brackenridge] Park."

Let's just say that keeping it green was the main mantra of the project.

The building, which is undergoing a "rigorous process of checkpoints to meet the gold standards for sustainability" through the Leadership in Energy and Environmental Design (LEED) green building council, is aesthetically designed to "pull families out into the natural space surrounding [it] and to pull the natural space in," Rabke explained.

The DoSeum boasts more than 600 solar panels, which produce approximately 20 percent of the facility's energy. All building materials were extracted, harvested or recovered — as well as manufactured — in Texas and reused materials were incorporated wherever possible.

Perhaps the facility's most green feature is an elaborate water conservation and irrigation system that includes collecting and using 180,000 gallons of water per year from the heating and cooling systems, as well as capturing and controlling runoff from Broadway and the museum's parking lots.

And the cool thing about it is that visitors can see it for themselves — a 33,000-gallon cistern display shows how water is captured and stored.

But what about inside?

Hurd said Rabke and his team set out to break up the cavernous structure so that it's not overwhelming but rather safe and inviting.

"You don't want a museum to feel like Vegas," she joked. "Where you have no idea where you're coming from or where you're going."