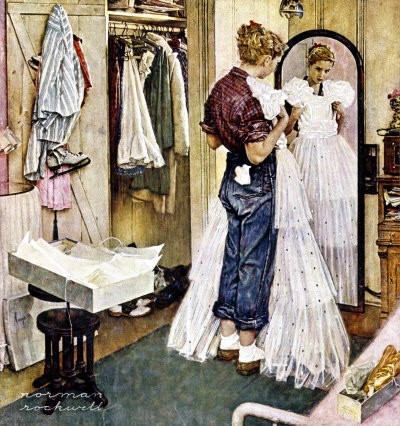 The works of Norman Rockwell, the go-to artist of the American Dream, are currently being exhibited at the McNay Art Museum in the travelling exhibit "Norman Rockwell: Behind the Camera." The exhibit delves into Rockwell’s methods for creating the classic depictions of American life for which he is known, loved and hated for, such as his use of photography as a base for his nostalgia-laced paintings.

That is how Rockwell’s paintings are most often thought of, at least: jovial, naïve, simple, innocent.

Professor of English at Johns Hopkins University Richard Halpern thinks otherwise, saying in his book Norman Rockwell: The Underside of Innocence, “They [Rockwell’s works] are not so much innocent as they are about the ways we manufacture innocence.”

This idea that Rockwell did not paint an idealized America but instead created deep metaphors of innocence and ignorance is not often thoroughly examined–so let’s have a look:

Rockwell’s art at a glance is swarming with more pastels than Easter Sunday, much of his work dominated by soft blues, yellows and reds. This, coupled with the occasionally cartoonish expression and exaggeration, give people (even those who are about 45 years too late for the '50s) a warm, fuzzy feeling about the good ol’ days.

Take, for instance, his painting Prom Dress depicting a young girl in baggy clothing, holding up a dress while she studies herself in the mirror. The image is washed is a warm yellow color, like it’s been sitting at the bottom of a dresser drawer for too long–an old but cherished memory.

The image is sweet: an uncertain tomboy, loose jeans and flannel sleeves rolled up, a handkerchief or rag in her back pocket, standing in a clean but disorderly snippet of a bedroom. It is in the mirror that the underlying story is told.

The reflection the girl examines is womanly, made-up, reflected in front of the very feminine pink of her wall instead of the indiscriminate yellow dominating the image outside the mirror. Is this a simple painting of an innocent, cute moment or a depiction of the transition from young girl to woman – the loss of innocence?

Or does the girl put the dress back and keep the grown up world locked away in the mirror?

Questions of innocence and the shedding, losing or perhaps adopting of ignorance are raised by closer looks at many of Rockwell’s works: “Dewey v. Truman,” “Triple Self-Portrait,” “Boy on High Dive” and of course, “Girl at Mirror” to list a handful.

Maybe Rockwell just expertly showed us what we want to believe in hindsight, glorifying innocence, and even its loss, to mask our murky recollections of it.

I don’t know about you, but my prom dress was black and my friends wore Converse.