Not your father's doctor drama

Measures a dependable but unflashy ride 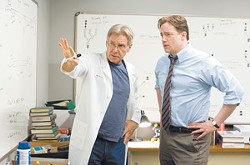 (Or not, if you like. Frankly, I don’t know much of anything about cars, and can’t really say with any ironclad conviction that things are or aren’t like them. Let’s say, though, for the moment, that movies are.)

With movies, as with cars, you, the consumer, generally have a sense of what you’re looking for as you prepare for a purchase, and can often significantly narrow your search (with some plausible hope of success) absent cartloads of research or effort. You know, for instance, whether spectacle and aesthetics, for you, occasionally trump finely tuned performance, and can select accordingly. You might not always be in the mood for the snarling, big-budget sports coupe, and maybe sometimes the mango-green indie VW rabbit (now with bike rack and Paramount Vantage bumper stickers!) just drags a bit too much. Either way, you can usually level a pretty good guess at what to expect should you opt for a Bay over a Baumbach, a Viper over a Volvo.

The nice thing about Extraordinary Measures is that you probably won’t be. Check the synopsis, the cast, the “inspired by a true story” tag. The PG rating. The title. Even the CBS Films banner. Watch the trailer if you like, but you’ve already got a feel for it, yes? If movies are cars, Measures might be a Buick. Which isn’t a knock; just a classification. (For my money, the film works, on its own terms.)

Certainly, the picture’s most revelatory aspect, for me, was its introduction of the affliction at its crux: Pompe disease, according to the National Institute of Neurological Disorders and Stroke’s website, is a “rare ... inherited and often fatal disorder that disables the heart and muscles” due to an inability to break down the stored sugar glycogen. I’d never heard of it, and now probably won’t soon forget it. Fraser plays John Crowley, a (real-life) father of three — two of them diagnosed with Pompe — who leaves a lucrative position at a pharmaceutical company (abandoning not only a considerable salary, but vital health insurance, as well) in order to find and fund a cure. He’s aided mightily in his efforts by a steady and supportive wife (Russell) and a ram-skulled, badass-classic-rock-lovin’, possibly brilliant (fictional) scientist named Stonehill (Ford). Together, Crowley and Stonehill birth a startup biotechnology company to develop and test the latter’s theory, which may be the key to developing a treatment — though Stonehill himself warns upfront that he cannot cure the Crowley kids of Pompe, only “save their lives.”

Now, back to Buick. Again: When I say that, it isn’t without affection. The first car I drove regularly was a Buick. Mom’s light-blue. Good memories. Of course, that’s a bit misleading as well: I don’t quite mean the well-loved, semi-beat-up variety of Buick, either — that’s a bit too affectionate. No, Measures is the newer-model, more polished sedan: Clean-looking, serviceable, noble maybe. OK, but a bit bland. That sounds heartless, but the film doesn’t need flash or edge: Its saving grace is its story, which is significantly more than remarkable. There’s some question as to the veracity of the film’s specifics (Google “oklahoma extraordinary measures” or check the comments section on the film’s imdb.com page for controversy), but anything close to the tale unfurled by Vaughan and co. would be compelling. Translation: Yeah, I cried. Of course I did. And that’s the point, really: Aided by some fine and fun performances (watch out for Vance’s affecting cameo), Measures, like any dependable car, gets you where you want to go.