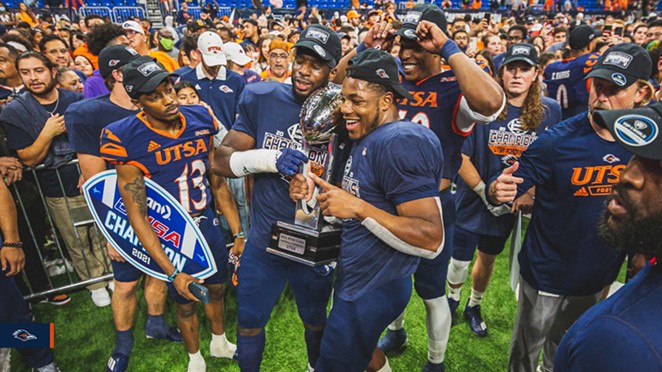 You don't have to be a sports fan to know UTSA's football team had a history-making season. Its Friday win over Western Kentucky handed the Roadrunners a Conference USA championship and a 12-1 record — the best in the history of the program.

Which is exactly why fans are disappointed — no, scratch that — kinda pissed that UTSA landed in North Texas' Frisco Bowl, the same contest it was originally slotted to play last year, when it ended the season with a 7-4 record.

After weeks of speculation that Roadrunners could end up in the higher-profile Independence Bowl or New Orleans Bowl, the team will instead take on No. 24-ranked San Diego State in a Tuesday, Dec. 21 matchup stadium with a capacity of 17,200, the Express-News reports.

Some fans on Twitter expressed confusion and anger, calling the decision "awful," "dirty" and "lame as hell." In a now-deleted tweet reported on by the Express-News, UTSA defensive lineman Brandon Matterson appeared to share the pain, saying “This is a joke right?”

Hey @ESPN, how does UAB warrant the Independence Bowl against a ranked BYU team but UTSA, who beat UAB, ends up playing on a TUESDAY in the Frisco Bowl?

They did UTSA dirty with that Frisco Bowl lol

I pay very little attention to college football, but UTSA going to the Frisco Bowl is lame as hell.

UTSA Athletic Director Lisa Campos told the Express-News the school could "always hope" its championship win would land it at a higher-profile bowl. However, she added, the decision is up to Conference USA and representatives from the bowls.

Roadrunners Coach Jeff Traylor looked for the positives, telling the Express-News he's happy the team will play close to home. According to the daily, he "brushed off" a question about fan disappointment over which bowl UTSA will play.

“We have no control over that," Traylor said. "We just go where they tell us to play and play who we’re supposed to play, and we’re going to trust the triangle and follow our culture.”