How Ellsberg exposed the son-of-a-bitching truth 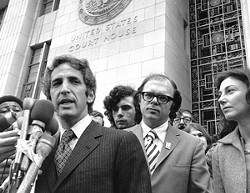 
Though the title of this absorbing doc is a mouthful, it has the ring of truth. Daniel Ellsberg was indeed once the most dangerous man in America — at least he was to those in the political power structure who had supported the Vietnam War and continued to push it at an unspeakable price. As a high-ranking Pentagon analyst, Ellsberg was one of the conflict’s architects, working alongside Defense Secretary Robert McNamara on an escalation strategy more concerned with mathematical efficiency than messy realities. For a long time he was a gung-ho jingoist. As a former marine officer, he went so far as to personally lead combat missions as a civilian adviser, charging into the jungle, rifle in hand.

Eventually, like most of the rest of the country, he had an epiphany that the war had been a terrible mistake, but he was actually in a position to do something about it. While soaking up the sun at the Rand Corporation, a think tank based in Santa Monica, California, Ellsberg was still in the loop, but far out of sight of military brass. He began Xeroxing the thousands of pages of top-secret documents he had access to, and started leaking them to the press in 1971. Those mountainous documents, dubbed “The Pentagon Papers,” implicated several former presidents who steered the nation headlong into the Vietnam disaster, through a long streak of mismanagement, lies, blunders, and tragic hubris.

Of course, this sent the Nixon administration into an apoplectic fit, leading to wiretaps, a slander campaign, and a mistrial for Ellsberg due to judicial tampering, all of which came to a head a few years later during Watergate.

Viewers of a certain age will be very familiar with the story; everyone else will get a fascinating peek at the contentious era through ample archival material. The highlights come from clandestine Oval Office conversations, in which a foaming Nixon seriously considers nuking Hanoi, and invents colorful adjectives like “son-of-a-bitching.”

This serves as a sort of companion piece to Ellsberg’s old boss McNamara’s brilliant confessional, The Fog of War, but while that film had the feel of a remorseful spiritual purge, the tone here is far more congratulatory. With Ellsberg as narrator, the film does feel a bit like a victory lap, and while he has history on his side, his salt-bed-dry personality lacks some humility. Of course, Ellsberg has something to crow about: His actions greatly contributed to not only the end of the war but to the downfall of a president, accomplishments very few can put down on their résumés. •