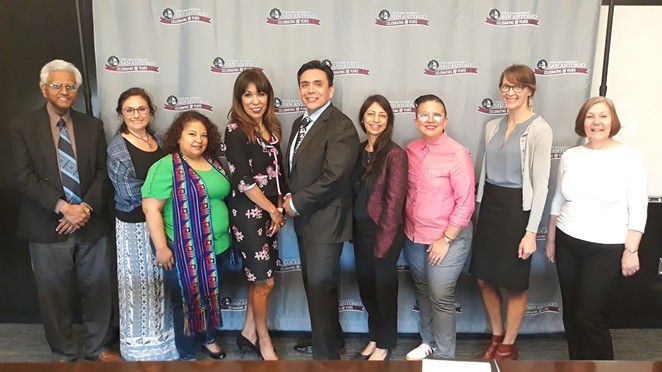 Courtesy of Macondo Writers Workshop, Nuestra Palabra and Texas A&M University-San Antonio
Introduced in Nobel Prize-winning Colombian author Gabriel García Márquez’s (1927-2014) short story Leaf Storm and further brought to life in his iconic 1967 novel One Hundred Years of Solitude, the town of Macondo is among the most famous fictional locales of the literary realm. With a name the author plucked from a sign at a banana plantation, Macondo — which is also a variety of tree — is almost certainly based on the García Márquez’s birthplace of Aracataca, a picturesque, riverside town in Colombia’s Caribbean region.

Long associated with the everyday mysteries of magic realism — a genre García Márquez helped define — Macondo has sparked imaginations for decades and served as inspiration for countless creative endeavors, the most relevant to San Antonio being the Macondo Writers Workshop. Organized by beloved author and former San Antonio resident Sandra Cisneros (The House on Mango Street, Caramelo, Woman Hollering Creek) in 1995 — the same year she was named a MacArthur Fellow — the workshop has evolved from an informal gathering of writers, artists, activists and scholars to a nationally recognized, master’s level program geared for “committed and well-seasoned writers capable of reviewing each other’s work with compassionate rigor and vision.”

Since outgrowing its original home in King William, Macondo has been hosted
click to enlarge

Sandra Cisneros photographed by Ray Santisteban in 2007
by an array of local institutions and was placed in the hands of the Guadalupe Cultural Arts Center in 2013 when Cisneros relocated to San Miguel de Allende. Last year Macondo found a new home base at Texas A&M University-San Antonio, which recently signed a memorandum of understanding with Nuestra Palabra: Latino Writers Having Their Say, a Houston-based organization dedicated to promoting Latino literature and literacy. A statement announcing the partnership explains that, “The agreement between A&M-SA and Nuestra Palabra essentially establishes a framework for a partnership in which A&M-SA organizes and conducts Macondo Writers Workshop while Nuestra Palabra financially sponsors the workshop’s writing faculty.”

Although the deadline for applications passed in February, Macondo traditionally includes evening readings and lectures, “many of which are open to public presence and participation.”