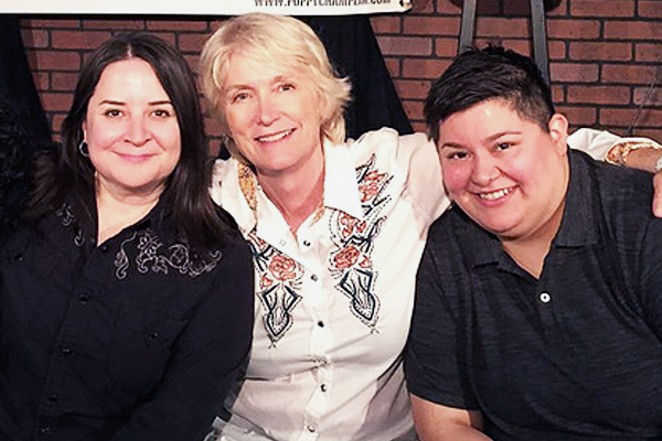 Courtesy of Poppy Champlin
Comedienne Poppy Champlin is headed back to San Antonio with her unique comedy revue, the Queer Queens of Qomedy, for a one-night-only gig at Laugh Out. Champlin’s sidekicks on this four-city tour are two of the funniest women in Texas: Sandra Valls from Laredo and Crist Guzman from Dallas. Champlin has been producing the revue for several years now, featuring a rotating cast that’s included Vickie Shaw, Carol Leifer, Julie Goldman and Gina Yashere, among many others.

Once crowned by Joan Rivers as “America’s Funniest Real Woman,” Champlin has had a long and stellar career that includes appearances on LOGO, Showtime, HBO, VH1 and Comedy Central. Los Angeles-based Valls has been featured in two Showtime specials, The Latin Divas of Comedy and Pride: The Gay and Lesbian Comedy Slam. Curve Magazine has boasted that Valls is “one of the top badass comics to watch for.” In June, Valls performed here at the Pride Bigger than Texas Festival. Guzman got her start in radio, working behind the scenes at Power 108 in Waco where she developed her own show, This & That. According to Champlin, Guzman’s act recounts hilarious tales of LGBT marriage and family situations that “almost” everyone can relate to. A portion of box office proceeds will be donated to Pride Center San Antonio.