With three first-round picks in the upcoming draft, the Spurs have options as they shoot for their next young star 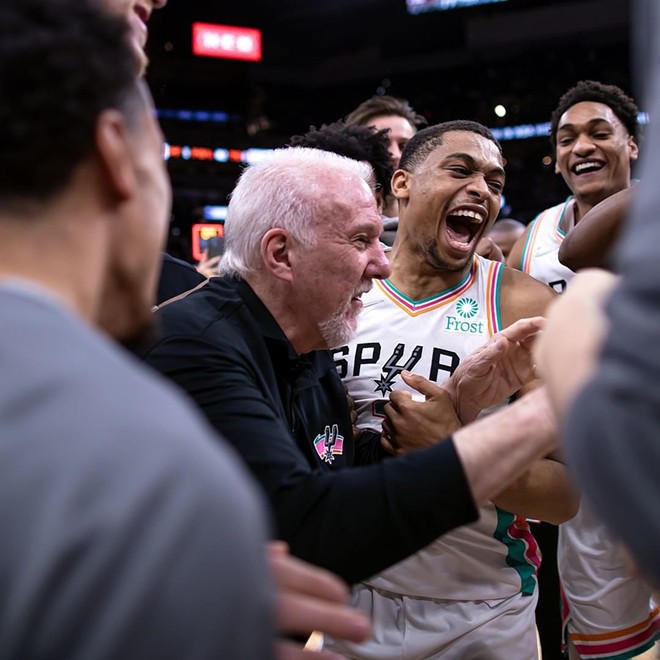 Instagram / @Spurs
Coach Gregg Popovich and the Spurs organization have a variety of options as they head into the draft.
More than a week away from the June 23 NBA draft, speculation is swirling about who the San Antonio Spurs will pick to try to rebuild the franchise after the last lackluster season.

The Spurs finished 2022 with a bitter loss to the New Orleans Pelicans in the first round of the play-in tournament. A regular season record of 34-48 subsequently gave the team the No. 9 spot in the upcoming draft.

Alongside the ninth pick, the Spurs also have the 20th (via the Raptors) and the 25th (via the Celtics). With the bevy of trade leverage on its side, where does San Antonio go from here?

All eyes should be on the big man — emphasis on big — Memphis freshman Jalen Duren, Sports Illustrated reports. Likely the youngest player in this year’s class, Duren's NBA readiness is apparent with his old-school bruiser style of play to go along with his pick-and-roll prowess. He can block shots, get rebounds, finish alley-oops, walk the dog and take your mom out for a nice lunch. The man can do it all.

According to the Ringer’s 2022 NBA Draft Guide, the Spurs also could be positioned to take Ousmane Dieng out of New Zealand’s NBL league with the ninth pick. Dieng’s professional experience and youthful vigor could be a strong front-court addition opposite Dejounte Murray and Keldon Johnson. A 6-foot-10 ball-handler with switching ability on defense, Dieng could be a potential starter to fill in the much needed 4 position in the lineup.

The final likely prospect to keep an eye on with the ninth is Wisconsin shooting guard Johnny Davis, according to the NBA's Consensus Mock Draft. At 6-foot-5, Davis is a great mid-range shooter and the type of player who looks like he gives a shit about playing defense. He could prove to be a solid fit under Coach Gregg Popovich's guidance. The sophomore guard had a breakout season this past year, averaging 19 points and 8 rebounds while earning Big Ten Player of the Year and consensus First-Team All-American honors.

The real protein of this offseason lies within the conversation around the Spurs' late first-round picks. It’s been rumored the team is looking to trade up in the draft for proven NBA players to avoid three rookie guaranteed contracts next season. Speculation has percolated that San Antonio could land spots for big names such as Deandre Ayton and OG Anunoby.

If that's true, expect the unexpected in this year’s draft, because the Spurs could be making moves.